Daniel Libeskind and inLodz21 Institution are designing Nexus21, an urban revitalization project of 21 structures that vary between residential and commercial buildings to urban spaces. The new cultural hub is located in particular neighborhoods to promote the creativity and innovation that lies in the city, such as architecture, textiles, fashion, and film, which are all part of its heritage. The master plan will also work on the spaces in between the revived structures, creating a vibrant nexus between the old and the new, while adding value to the historic neighborhoods of Łódź, Poland. 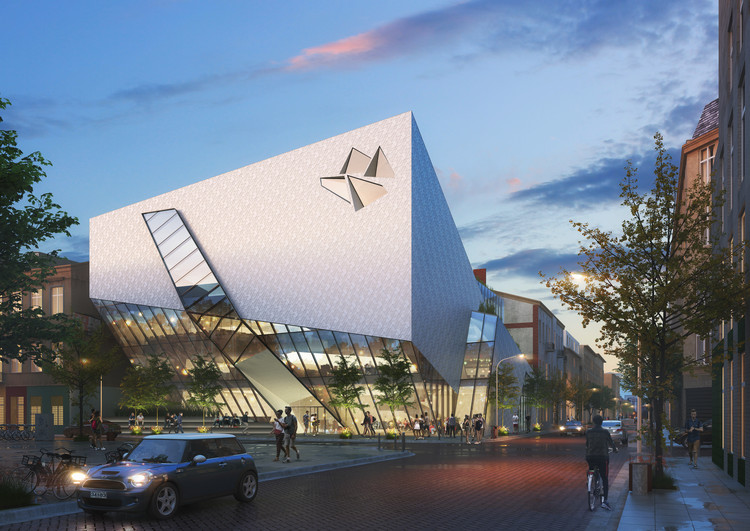 In this episode, host Aaron Prinz speaks with Carla Swickerath, Partner at Studio Daniel Libeskind, about how she helped lead the development of the World Trade Center site, the impact of technology on the future of the profession, and what sets Studio Libeskind apart from other firms.

Plans have been revealed for a new Modern Art Center (MAC) in the historic city of Vilnius, Lithuania. The 3100-square-meter "three-dimensional public space," as architect Daniel Libeskind describes it, is designed to be a "cultural gateway" that connects the city's 18th century grid and medieval walled city.

“We wanted to create a museum for the people of Lithuania, and also give this collection a home and an international audience. This collection is about the cultural legacy of the country,” said founder Viktoras Butkus. “Libeskind’s work is expressive, innovative, and, most importantly, has the power to tell the story of the past while connecting to the future of the city,” added Butkus.

The Jewish Museum in Berlin opened its doors 14 years ago today. Inspired by a lecture given by Daniel Libeskind, Berlin-based photographer Laurian Ghinitoiu captured the building and its dramatic plays of light and texture in a series of 20 photographs.

Daniel Libeskind teamed up with the professionals at Immersive and Innovision to realize the four 10-meter-high, "shimmering" sculptures that are outlining the Milan Expo 2015's central square. The LED-lit aluminium structures, dubbed "the Wings," were designed to "animate the public space with a constant flow of pulsating patterns and imagery related to the theme of the Expo: health, energy, sustainability and technology." They will remain on view through the duration of the Expo, which concludes October 31.

Take A Look At Milan Expo's 2015 Pavilions on Opening Day

Italy's global commercial fair, Milan Expo 2015 opened today. The six month event, expected to attract nearly 20 million visitors, is showcasing 54 national pavilions, among a number of corporate and multinational installations, all focused on "Feeding the Planet" and promoting their national cuisine. Pavilions by Foster + Partners, Herzog & de Meuron, SPEECH, Daniel Libeskind and many others will remain on view through October 31.

Take a look at some of the fair's most talked about pavilions on opening day, after the break.

In light of the recent opening of Mons International Congress Xperience (MICX), Daniel Libeskind hosted a private tour through the conference center, explaining his thinking behind the building’s expressive form. The experience was captured on this short film by Spirit of Space with the intention to open the discussion up to a larger audience.

The building, an important new landmark in the Belgium city of Mons, is described by Libeskind as “an expression of contrasting geometric forms.” Aside form providing function and “lively” spaces for auditoria and conference use, the building aims to be “a hinge between the old city and the new.”

Daniel Libeskind has been commissioned to design a leisure destination for the Lithuanian city of Vilnius. Perched on the highest point in the city, between Vilnius’ historic center, business district and airport, the “Vilnius Beacon” aims to become a cultural and recreational attraction at the Liepkalnis Ski Hill that offers a range of summer and winter activities.

“I was inspired by the landscape of this beautiful city. My goal with this project was to bring an exciting dimension of architecture that respects the natural elements, while providing a year- round sustainable center for the citizens of Vilnius,” said Libeskind. “The Beacon is set to become a new epicenter of entertainment, leisure and culture for the city.”

"Its an adventure, because it's a highly political, highly emotional, highly complicated process, to get something built on the site which is about memory," explains Daniel Libeskind. "It's a day that changed the world… and architecture responds in constructing something that has sense for people, that has spirit."

Daniel Libeskind has teamed up with locally-based GS4 Studios to propose a four-tower, luxury condominium project for downtown Boca Raton, Florida. North of Miami, the “Mizner on the Green” development will add 500 residential units and a two-acre public park directly adjacent to the Boca Raton Resort and Club golf course.

Last week, Daniel Libeskind joined Century Properties Group to celebrate the ground breaking of the “Century Spire.” Designed as a key building for Century City - a 3.4 hectare, mixed-use development in Makati - the all-glass, 60-story office and residential tower sets itself apart with a “dramatic crown” that divides and expands the building’s top half as it rises.

Daniel Libeskind’s “elongated Star of David” has been announced today, the architect's 67th birthday, as the winner of an international design competition for Canada’s National Holocaust Monument. Selected from a shortlist of six, the winning "Landscape of Loss, Memory and Survival" monument is expected to be constructed in the Canadian capital of Ottawa on the corner of Wellington and Booth Streets sometime next year.

Following the news in 2010 that Daniel Libeskind was to design a "landmark" building for the UK's University of Essex, it has been announced that the plans have been abandoned. What was known as the Institute for Democracy and Conflict Resolution (IDCR) "was intended to become the ‘anchor’ to a new Knowledge Gateway research park at the university’s Colchester Wivenhoe Campus".

After initially getting the go-ahead earlier this year, the design for the Maze Peace Centre in Northern Ireland, designed by Daniel Libeskind in collaboration with McAdam Architects, was dealt a major blow last week, when First Minister of Northern Ireland Peter Robinson retracted his support for the controversial building, saying that it would be wrong to continue with the build without achieving a consensus.

Read on after the break to find out more about the controversy.