Alongside designer Paul Tinker and developer Esteban Almiron, UK-based illustrator Sam Chivers has created a series of animations visualizing the sustainable development of airports for a recent Guardian piece. The animations, which describe the topics of transport, alternative energy, noise reduction, airport terminal design, biodiversity, and fuel efficiency, capture the passage of time from morning to evening in Heathrow Airport in London.

Heathrow Airport is offering a first glimpse at commissioned expansion proposals by Zaha Hadid Architects, Grimshaw, HOK, and Benoy, that will shape the future of the global hub in London. The project brief called for "bold ideas to create a world-class sustainable airport that [will] deliver innovations in passenger service, integrate local communities, and showcase the best of British design." Challenging the architects to push the boundaries of what is the current airport typology, the proposals are meant to drive a step change in global airport design. 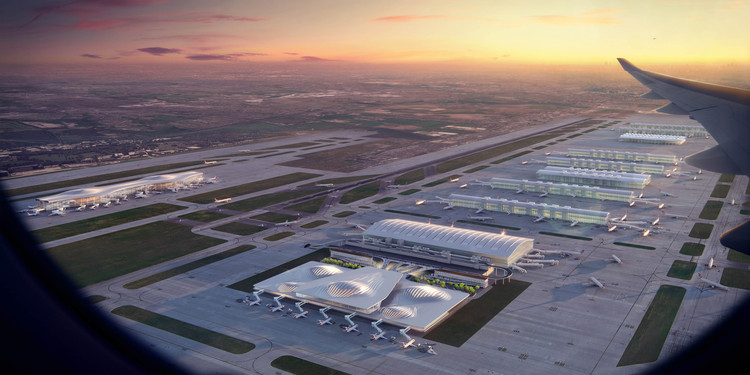 In response to the UK Airports Commission's call for evidence, Foster + Partners has released a detailed feasibility study supporting their plans for a new airport on the Isle of Grain in the Thames Estuary. Their plan proposes a four-runway airport built on a 35 square kilometre platform constructed partially in the mouth of the Thames. The scheme is popularly called "Boris Island" thanks to its most prominent supporter, Mayor of London Boris Johnson.

Norman Foster said "Since the Airports Commission submission a year ago, the need for increased airport capacity has become even more urgent. It is time to get serious about the issue of airport capacity. Britain needs an effective long-term solution, not the usual short-term fix that is Heathrow’s proposed third runway. London today needs to follow in the footsteps of its nineteenth-century forebears and invest boldly in infrastructure. Only long-term thinking will properly serve the demands of our future generations."

The prognosis does not look good for Foster + Partners' plan for an airport hub in the Thames Estuary. The Guardian reports that the Independent Airports Commission has released an interim report, revealing a shortlist of potential options for the UK - and the Thames Hub (with an estimated price tag of £112bn) isn't on it. Yet hope (however slim) does remain for the proposal, as its persistent defender, London mayor Boris Johnson, has managed to convince the commission to revisit the idea in early 2014. Get the whole story at The Guardian.

Identifying connectivity as the key to prosperity within the 21st century, London Mayor Boris Johnson acknowledged the wider economic and regeneration potential of a new hub airport at a City Hall meeting today.

In his speech, Johnson recommended three optimal locations for the new airport: the Isle of Grain in north Kent; Stansted; or on an artificial island in the middle of the Thames estuary. These three suggestions come as a result of a year-long, independently peer-reviewed investigation by the Transport for London, which confirmed the inability of London’s current major airport, Heathrow, to meet demands by expanding.

More on London’s future hub airport after the break...

BAA is looking to appoint a team to produce a ‘comprehensive masterplan to examine the potential expansion of Heathrow Airport’ – including a third runway and a new sixth terminal.