Save
Is Fixing City Sidewalks Feasible for Future Cities?
Share
Or
Copy

Whether you live in an urban, suburban, or rural area, there’s a good chance that using a sidewalk, in some capacity, is part of your everyday routine. Whether crossing over a sidewalk to get to your car in a parking lot or walking several blocks on your commute to your office downtown, sidewalks are critical for creating safe places for pedestrians away from the streets. But what happens when cities don’t take ownership over sidewalk maintenance, and they’re left to be protected by the people who just use them?

Sidewalks were once the main sources of transportation in American cities and the epicenter of social happenings. Before cars existed, sidewalks were places where all modes of transit came together- horses pulled carriages, people roamed freely, and streetcars moved people from place to place. The unruliness of the “sidewalk” allowed people to freely move in all directions. When cars were introduced and became mainstream transportation sources, sidewalks became what we know them to be now- slivers of pavement pushed aside and designated for people to walk on, with signals indicating when we are legally allowed to cross the street to the next sidewalk.

Los Angeles and New York City have two of the largest sidewalk networks in the United States, with 11,000 miles and 12,000 miles, respectively. Their maintenance, or lack thereof, is evident in their appearance and inaccessibility and in their cities’ municipal budgets which show how limited funding and resources go towards ensuring these urban areas are walkable. In Los Angeles, less than 1% of all of its transportation funds go to crosswalks, sidewalks, and signals, although the public voted in 2016 to increase the budget to 8% for the next 5 decades. It’s estimated that half of the city’s sidewalks are insufficient, and would require nearly 500 million dollars to repair and maintain them. As often as the city gets complaints and requests for repairs, Los Angeles has found it nearly impossible to keep up. The result is a city where walking is no longer much of an option, and mobility for people who need it the most is not feasible.

A recent survey of disabled residents in Hells Kitchen and Chelsea, two large neighborhoods in New York City, say that sidewalks are poorly maintained and dangerous, giving them an overall rating of “poor” or “very poor”, and describing them as “very often” or “all of the time” dirty. Nearly 85 percent of residents in these areas stated that they almost regularly trip on New York City sidewalks. Residents complained further regarding sidewalks in winter months, where individual building owners or landlords are assumed responsible for shoveling the snow in front of their respective properties- but often neglect to do so.

In recent years, the United States has become almost obsessed with the idea of a walkable city. But how can people be expected to walk when the sidewalks are not usable? Clean, safe, and crack-free sidewalks are rare in most cities, and yet are the one mode of transportation that, in an ideal situation, can be used by everyone. When purchasing a home these days, many residences come with a walking store, which rates how walkable a home is compared to other neighborhood amenities. It identifies where people can walk, but not how.

Many cities have begun to create guidelines or playbooks for how to think about sidewalk design of the future, looking ahead to city repairs in a way that integrates goals for sustainable areas that rely less on cars and more on public transportation and biking. Repairing sidewalks just to not keep them maintained is expensive, and continues to promote the use of cars. By rethinking what it means to have the ability to walk from your home, work, school, or local amenities, the shift will focus away from private vehicles and more on how the mass population will benefit. Sidewalks will no longer be pushed to the “side” but maybe they’ll be designed in the historical way they once were, front and center. 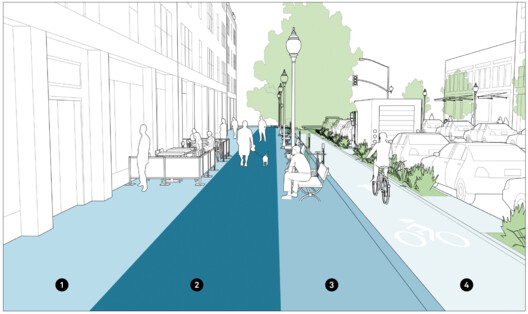