Save
Let There be Light! 12 Projects that Show the Impact Lighting can Make to an Interior Space
Share
Or
Copy

Light is a key feature in architecture. Centuries ago, the sun and fire were the only sources of illumination, but in today's technology-driven world, artificial lighting and cutting-edge optical technologies have found ways to mimic the qualities of natural light, making it possible to have a naturally-lit-looking space within four walls. LED technologies have even made it possible to embed lighting in furniture, interior surfaces, and facades, altering with their intensities and hues to make light a main feature in the architecture's storytelling.

If used effectively, lighting can become a lot more than just an illuminator; it becomes a mood setter, a symbol to a specific emotion the architect is trying to convey. For instance, indirect lighting becomes a floater, levitating the walls from the ground and making the space seem lighter in weight, whereas orange light manipulates the space's temperature, creating the illusion that the users are walking into an intense, overheated room. 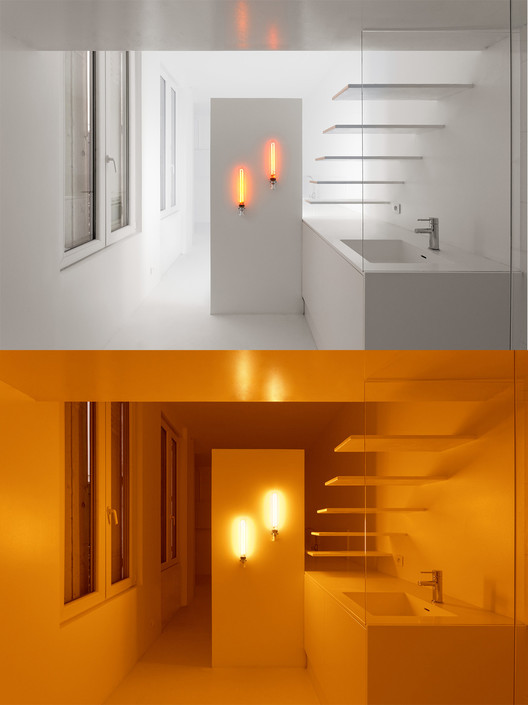 Read on to discover how lighting can influence a space and what interiors would look like if the lights were turned off.

The light we see is made up of waves of electromagnetic radiation that fall within a certain range of wavelengths. Our eyes can only detect light that falls within this specific range; anything outside the visible spectrum is not visible to the naked eye, such as Gamma rays, X-Rays, and UV Rays. Lighting is typically categorized in "ambient, task, accent and decorative lighting". Each category serves a different purpose, so when designing a space, it is important to understand how different light levels can complement each other and influence the environment inside the interior space.

Color is an important aspect of lighting as well. It can define the overall mood and environment of the space, and influence the way people respond to their surrounding environment. In lighting, color temperature refers to the amount of orange vs blue tint added to the white light: warm light has a more orange hue whereas cool light has a more blue tint to it. Warm white lighting fixtures are often used in residential spaces to create a cozy atmosphere, whereas neutral and cool white light boost people's energy and productivity, making them a good choice for commercial spaces, classrooms, and offices. However, some architects amplify these hues and add tints to create a specific atmosphere.

A small Parisian studio renovation project in which the lack of natural light led the client to ask the architects to intervene in regards to artificial light. The team chose to adopt a "radical and binary approach" by studying the spectral qualities of two different sources of artificial light. They explored the spectral qualities of the house's various light sources, and then created an architecture that uses their features. The apartment is designed in a simple and neutral manner, leaving the architectural expression to be generated by light.

A Guy, his Bulldog, a Vegetable Garden, and the Home they Share / HUSOS

This 46-square-meter refurbishment project is for an ER doctor and his bulldog. Since the client’s work hours are very inconsistent, he catches up on sleep after night shifts by taking long naps during the day. Therefore, instead of focusing on the bedroom as the only place to sleep, the architects created a capsule-periscope for taking siestas in the living room as an alternative to the bedroom. The capsule also allows to receive casual intimate acquaintances, since it is a norm in homosexual sex culture in Madrid to reserve the bedroom for closer relationships, as explained by the architects.

This socio-bioclimatic, multifunctional cabin is dedicated for a migrant couple and their extended family. Its shades of "Jacaranda mimosifolia purple" recreate the landscapes found in South America, where both the tree and the cabin’s residents are from. As well as offering privacy, this membrane provides representation for the cabin's occupants, a non-heteronormative, transnational family.

Option Coffee Bar is located at the city center of Udonthani, Thailand. The space has three primary functions: café, restaurant, and bar, all joined together in one space with time-sharing functions; café/bakery in the morning, and a craft-beer bar in the evening. Since it is a time-sharing, the zoning design of this café was created in the way to suit both functions. The main structure is a simple white box to facilitate highlighting the contrast of the different contexts. A major plain of this white box comes together with 2 types of voids: ‘transparent’ and ‘translucent’. The translucent one is the front façade, and is made of a double-layer clear-colored polycarbonate, which creates a variation of light. It allows natural sunlight from the outside during daytime for the café, while projects a multi-color lighting display from the inside during the night for the bar. This manipulation of light changes customers’ emotions in parallel to the space's timeline.

D-Edge electronic music club underwent a restoration process in early 2011. The restoration aimed to expand the house, as it could no longer welcome the amount of people every day. According to Muti, the architecture " is an immersive experience in which the audience experiences the sound waves. The architecture of the space changes according to the music." The lighting implemented in the interior spaces create dynamic shapes and colors that correspond to the music and transform according to the beat being played.

T3 Architects designed the first Dojo in Saigon, Vietnam, in the garden of an old French style Villa. Since the existing Villa will be rented as part of the Dojo office and as a co-working space for Judo practitioners, T3 decided to create the main circulation through the existing building where a new changing room is allocated.

The aim of the center was to be visible from a distance, covering an entire western perspective, from north to south. This is why the architects have designed the structure as a luminous form, acting as a sign for passengers by day and by night. Due to the illumination of the facade, passengers driving by will witness a moment of uncertainty between sensation and reality, not knowing the position the structure is in. Turned off, the facade acts as a sheer envelope that shows what's inside the structure.

The Rombo's is a private space with three houses and a studio in a central and tree-lined area of Mexico City called Bosques de las Lomas. The architect left aside the touch and expression of materials, creating an all-white structure, that is ornamented by natural light and the surrounding landscape during the day, and vibrant artificial light during the night.

American artist James Turrell is notable for his fascination with light. He explains that light is not a tool to enable vision but rather something to look at itself. To heighten the light experience of a uniform blue sky, Turrell erases the gradation near the horizon; stating that “…if you go to the Rocky Mountains, to a high altitude where it is cold, you see sky that is such a crisp blue you feel that you could cut it and put it in cubes! That is the kind of sky I want, and I have been able to get it by selecting the altitude. There are gradations near the horizon where the blue is lighter, and then gradually, toward the zenith, it gets deep. With Roden Crater I have taken out the first fifteen degrees of height by aiming the tunnel sight lines above that level. At that point you see thirty degrees less than one hundred eighty degrees. That is how you get that incredible color – by eliminating all of the white at the horizon.”

Misci (short for miscegenation) is the crossing of ethnicities; brazing; miscegenation; mixture. The architects relied on a simple design to make the space seem like a sophisticated allusion to the aesthetics of vernacular architecture, utilizing earthy colors and textures. The team chose to use the same color throughout the space, and work the lighting in the negative footer, bringing lightness that the project asked for in the face of the strong context.

The core of the project is its monumental staircase; a structure wrought with the radiator grill of steel, and covered with a plastic material that creates a sculpture-like look.

The Philadelphia Museum of Art opened its doors to the public early May after completing an extensive four-year renovation led by Frank Gehry. The intervention focused on renewing the museum's infrastructure and creating galleries and public spaces while leaving the 1928 exterior untouched. To create the optical illusion of an increased height, the architectural team added indirect lighting to the ceiling coffres.