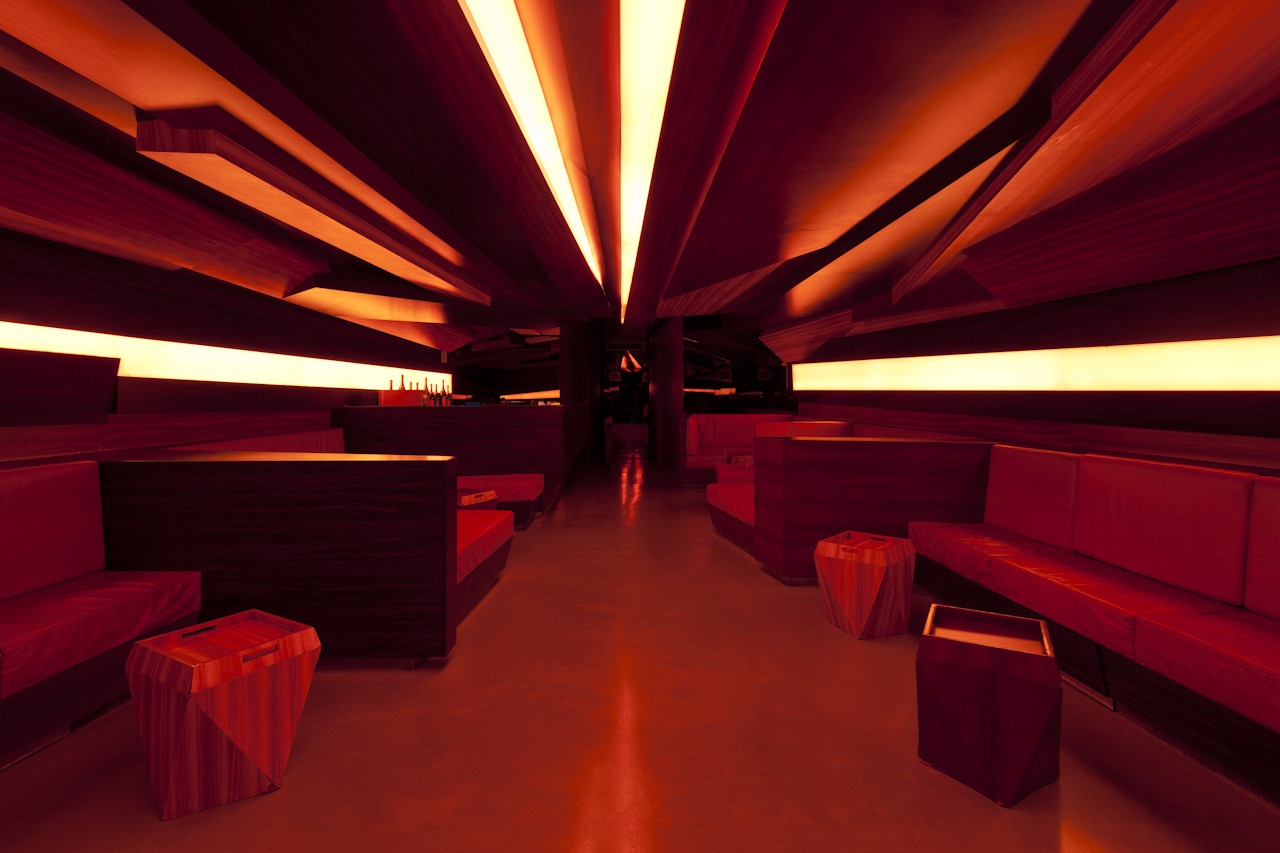 Text description provided by the architects. Opened in 2003, D-Edge electronic music club underwent a smart restoration process in early 2011. The aim of the restoration project was to expand the house, which could no longer house the amount of people interested in enjoying a program on an extremely well designed environment and great architecture every day.

The expansion follows the concept that brought the club international recognition. The designer Muti Randolph, along with architects Marcelo Pontes, Paula Zemel and Eduardo Chalabi were able to enhance to the maximum the capacity of the house.

Open for 13 years, the club operates in the Barra Funda neighborhood in central Sao Paulo. The original project, designed by the Franco-Brazilian office Triptyque, divided the space into a dance floor and bar. With the need to expand, the design by architect Marcelo Pontes was to use the neighboring site, a long and narrow plot, and distribute the environments into four floors.

The great challenge was to enhance the capacity of the club. To make this possible, Marcelo Pontes challenged the site by creating 4 floors with variable heights, with a reinforced concrete structure, allowing large spans for the stages to have enough spatial freedom. The idea was to organize the vertical circulation on one side of the building and the restrooms on the opposite side, creating a large open central space where Muti Randolph, Paula Zemel and Eduardo Chalabi could do what they wanted in terms of design.

The two volumes, the original black box and the new 4-storey building, are interconnected on the ground. The new entrance allows greater comfort for customers. Moreover, this new design opens up space for installing more check outs, creating a more pleasant flow at the exit. The check outs are also in harmony with the rest of the club, as they are part of a large, illuminated glass box that changes color. The new dance floor and lounge occupy, respectively, the first and second floors, while the roof yields a large terrace that overlooks the Memorial of Latin America. On this terrace is a bathroom disguised as a water box, vertically aligned with the restrooms downstairs.

Another change from the previous space was the responsibility of Paula and Eduardo. Utilizing the large space created due to the layout of the vertical core on one side and the restrooms on the other, the duo made ​​possible the creation of wood volumes that appear in the new dance floor, housing the bar and the DJs across the floor. They feature asymmetrical geometric shapes and they were not installed in parallel, in order to enhance the acoustic conditions of the house. "With the play of light, these volumes interfere in the environments, there is some shuffling, it's as if the place was shaking," says Muti Randolph. "The idea was to create the possibility of having these volumes disappear with the play of light and sound, and amplifying the environment," adds Paula.

The lounge is also lit by LEDs, it is more quiet and cozy, for clients who are conversing or taking a break before returning to the dance floor. On this level, small environments were designed that can accommodate groups of up to 12 people, which are still part of the larger quieter atmosphere. The bar is near the restrooms, and behind them is the same design for the dance floor. Paula tells that "The lounge was designed with naval reasoning, through the experience I had in the office Fernando Almeida, doing interior design for boats. On them, there is a different cut every 30 cm, both longitudinally and transversely. Thus, working in the tight spaces of small vessels where there is a need for maximum use of the space, we can find unique solutions that could present asymmetrical geometric shapes installed in parallel, in order to enhance the acoustic conditions of the premises. We use a refined geometry so that people can sit comfortably allowing for improved circulation," she adds .

Besides the unquestionable sound quality, the software used for lighting is able to synchronize the rhythm of the music with lights and animations projected on the walls. According to Muti, "it is an immersive experience in which the audience experiences the sound waves. The architecture of the space changes according to the music." The interior spaces make shapes and colors with the music and transform according to the rhythm.

The unification of the two volumes of the club is determined by the cladding of the facades with corrugated sheet metal. The main facade is cropped by frames that are protected by automatic shutters, revealing the exterior and the interior play of lights.

The idea of the double frame was detailed by Zemel + Chalabi skillfully. It is an operable glass sandwich that can be opened to perform maintainance of the led strips. Furthermore, silica is used in this space due to the internal AC temperature and the external heat.

The perfect design makes the people outside have the feeling that they are also dancing to the music. The colors of the facade change according to the music played inside the club, allowing people waiting outside to participate in what is happening inside.