The city of Madrid can be viewed as a place that is representative of all the architectural styles found on the European continent. 16th-century Renaissance buildings and 18th-century Baroque buildings all co-exist in harmony with more modern architectural styles such as Art Deco or the expressive contemporary architecture of recent years. Iconic contemporary architecture firms such as Herzog & de Meuron and Rogers Stirk Harbour + Partners, with projects such as the BBVA Headquarters and Madrid-Barajas Airport Terminal, have all played a part in defining Madrid’s architectural character too, making for a city with highly varied and distinct streetscapes. 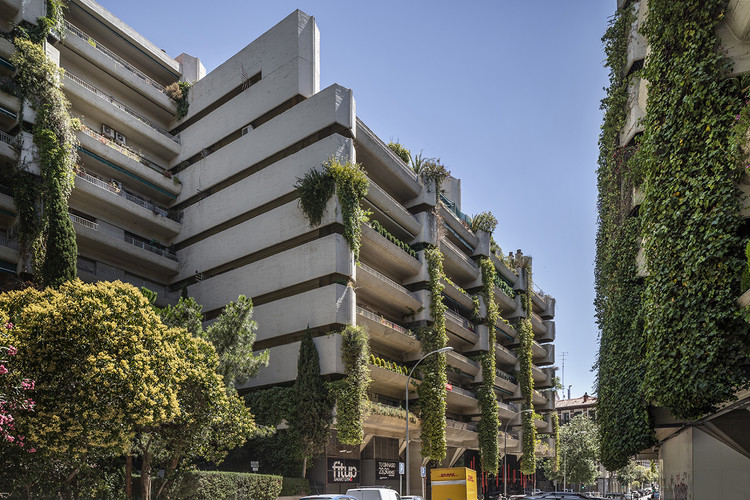 The Spanish capital’s link to another architectural style however - Brutalism - is less apparent in architectural conversations about the city, and photographer Roberto Conte’s photo series explores Brutalist architecture in the Madrid context. Documenting the buildings in a 2020 trip to the city, Conte’s photographs reveal the presence of striking concrete buildings that feature a combination of rectilinear and curved forms, most of them built from the 1960s to the 1980s, as Spain gradually moved away from the Francoist regime to becoming a democratic state. That period saw the emergence of Spanish architects such as Fernando Higueras Díaz and Antonio Miró Valverde, whose Brutalist works are far from plain, having an eclectic quality that is reminiscent of the Postmodernism movement.

The two architects - Díaz and Valverde - worked as a duo to design what is arguably the most emblematic building of the Brutalist style in Spain, the Instituto del Patrimonio Cultural de España, in 1964. Nicknamed the “Crown of Thorns” mainly due to its distinctive pyramidal rooflights that wrap around the top of the circular structure, the structure features four stories with a large central courtyard, and five inner courtyards housing interior gardens. The project underwent significant alterations throughout the design process, only being completed in 1990 after undergoing multiple renovations.

Brutalist Belgrade: Through the Eyes of Alexey Kozhenkov

The duo also went on to design the unique Edificio Princesa in 1975 - residential housing for the military in the Universidad neighbourhood of Madrid. Extremely deep balconies make up the expressive facade, with the rough, unfinished concrete finishes characteristic of Brutalism softened with the presence of vertical gardens and vegetation-filled terraces, creating a concrete structure that belies its imposing scale.

Earlier on in Spain’s Brutalist movement, the early 1960s also saw the maturing of the work of Francisco Javier Sáenz de Oiza, part of a group of architects who emerged in the 1950s and 60s, in an era that saw the rejection of the unimaginative neoclassicist style that emerged after Franco seized power in 1939. Oiza’s Torres Blancas building - designed in 1961, is an apt example of the “organic” Brutalism that typified Oiza’s architectural style. The concrete tower is 71 metres in height and designed to resemble a tree, with the curved balconies of the building grouped in a way similar to that of leaves on branches. The global influences at play are apparent with the building, with the intersecting cylindrical forms that make up the massing of the building bearing a close resemblance to the Japanese Metabolist structures of the 1960s.

Not limited to commercial and residential structures, Brutalism in Spain also found its way into religious buildings - such as the evocative churches designed by Cecilio Sanchez-Robles Tarín and Miguel Fisac Serna. The Church of Santa Ana y la Esperanza, designed by Serna in 1965, echoes Le Corbusier’s Ronchamp with its interior treatment, the altar containing arched recesses that are almost cut out from the bare concrete wall. Tarín’s Church of Nuestra Señora del Rosario de Filipinas also bears a similarity to the Ronchamp - the interior of the church making full use of creative openings to create a powerful and dramatic presence of light.

In a city that houses the famous medieval neighbourhood of La Latina, seeing the significant presence of Brutalist structures in Madrid highlights the truly global influence of the Brutalist movement, and shows how Spanish architects moulded the architectural style into highly unique urban forms.

Roberto Conte (b.1980) is a Milan-based photographer whose work focuses on the architecture of the twentieth century, documenting rationalist, constructivist and avant-garde projects, Brutalism and Soviet modernism. 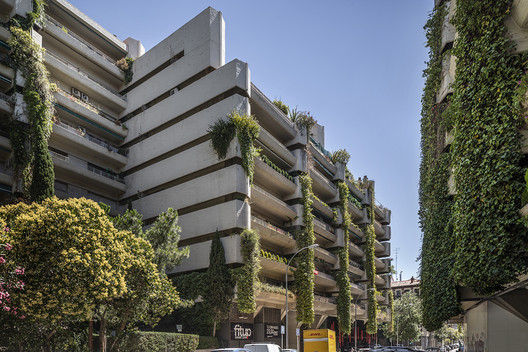