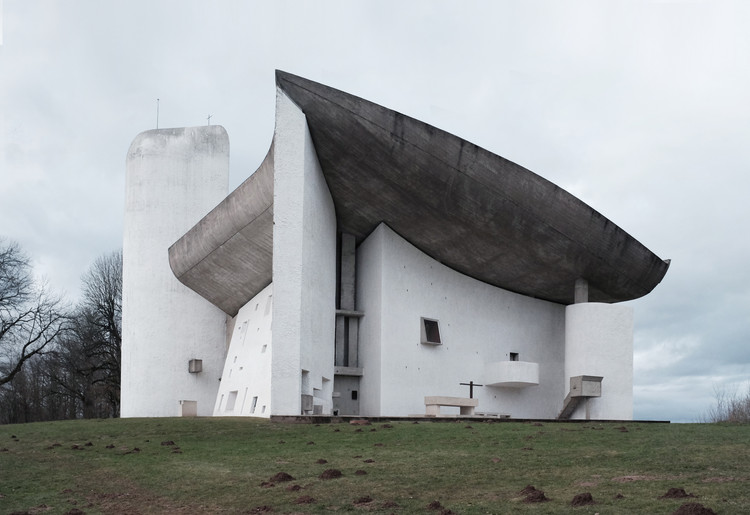 Text description provided by the architects. In the commune of Ronchamp, slightly south of east of Paris, sits one of Le Corbusier’s most unusual projects of his career, Notre Dame du Ronchamp, or more commonly referred to as Ronchamp.  In 1950, Le Corbusier was commissioned to design a new Catholic church to replace the previous church that had been destroyed during World War II.

The site of Ronchamp has long been a religious site of pilgrimage that was deeply rooted in Catholic tradition, but after World War II the church wanted a pure space void of extravagant detail and ornate religious figures unlike its predecessors.  Ronchamp is deceptively modern such that it does not appear as a part of Corbusier’s aesthetic or even that of the International Style; rather it sits in the site as a sculptural object.  The inability to categorize Ronchamp has made it one of the most important religious buildings of the 20th Century, as well as Corbusier’s career.

In 1950, when Corbusier was commissioned to design Ronchamp, the church reformists wanted to clear their name of the decadence and ornamental past by embracing modern art and architecture.  Spatial purity was one of Corbusier’s main focuses by not over complicating the program and removing the typical modern aesthetic from the design.

Instead, Corbusier wanted the space to be meditative and reflective in purpose.  The stark white walls add to this purist mentality that when the light enters into the chapel there becomes this washed out, ethereal atmosphere.  The effect of the light evokes expressive and emotional qualities that create heightened sensations in tune with the religious activities.

Ronchamp sits among a wooded terrain secluded from the rest of the commune; the chapel is placed atop a hill on the site setting itself on a metaphorical pedestal giving Ronchamp added importance.  Unlike most of Corbusier’s other works consisting of boxy, functional, and sterile volumes, Ronchamp is more of an irregular sculptural form where the walls, the roof, and the floor slope.  Stylistically and formally it is fairly complex; however, programmatically it is relatively simple: two entrances, an altar, and three chapels.

The walls of Ronchamp give the building its sculptural character. The thick (4’-12’ thick), gentle curving walls act as a practical method of supporting the concrete and masonry construction, as well as the massive curvilinear roof.  However, the walls do not solely act as structural and sculptural elements; they also act as acoustic amplifiers, especially in the case of the eastern exterior wall that reflects the sound out over the field from the outdoor altar.

The most striking part of Ronchamp is the curved roof that peels up towards the heavens.  The curving roof appears to float above the building as it is supported by embedded columns in the walls, which creates a 10 cm gap between the roof and the walls, which allow for a sliver of clerestory light.  The roof is actually the only glimpse of mechanized influence in the overall design of Ronchamp; the roof’s curvature mimics the curves of an airplane wing.  It’s aerodynamic in design and in all of its massive and heavy qualities it still appears weightless.

One of the most interesting aspects of the design is the sporadic window placement on the walls. Corbusier implemented small puncturing apertures on the façade that amplified the light within the chapel by tapering the window well in the wall cavity.  Each wall becomes illuminated by these differing window frames, which in conjunction with the stark white washed walls gives the walls luminous qualities punctuated by a more intense direct light. On the wall behind the altar in the chapel, the lighting effects create a speckled pattern, almost like a starry night, of sparse openings that are complimented by a larger opening above the cross that emits a flood of light, creating a powerful religious image as well as a transformative experience.

Even though, Ronchamp was a radical derivation from Le Corbusier’s other works, it still maintains some of the same principles of purity, openness, and communal sense of coming together.  Ronchamp was less of a move away from the mechanistic, International Style, as it was more of a contextual response to a religious site.  Ronchamp is an architecture rooted in context that’s based on modern principles, which makes Ronchamp one of the most interesting buildings of the 20th Century and of Le Corbusier’s career. 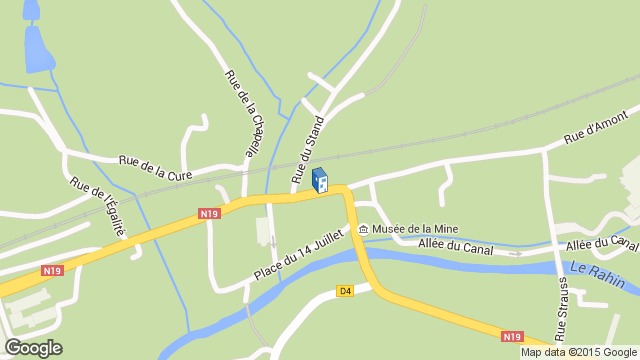 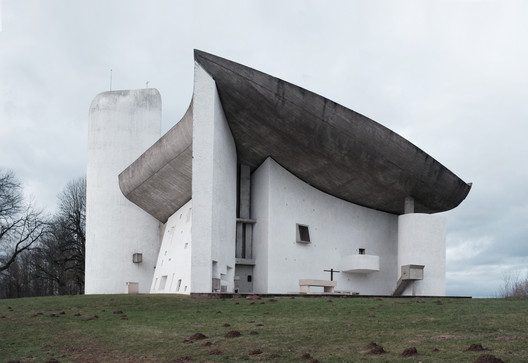