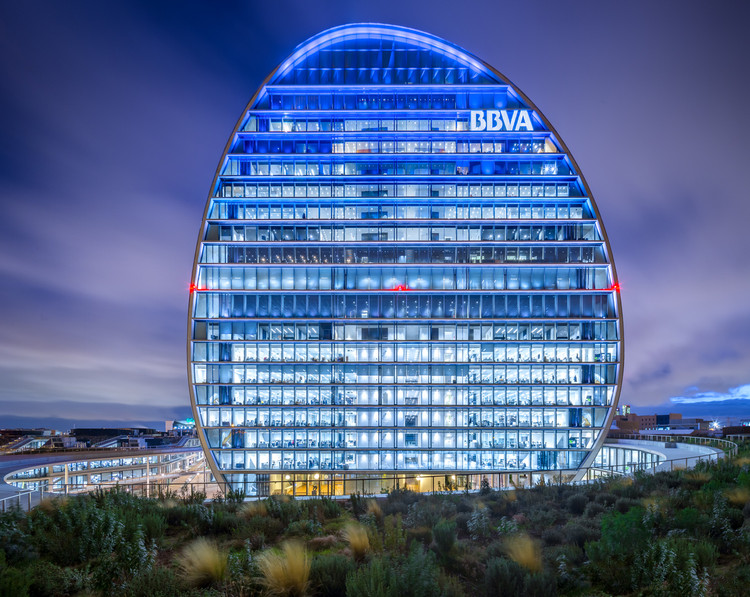 At the Periphery of the Capital
BBVA’s new headquarters is located on the northern periphery of Madrid. The site faces the highway and is surrounded by newly built offices, commercial buildings, and residential developments. When the bank acquired the site, eight unfinished office buildings occupied a substantial portion of the land, and as much of the existing buildings as possible were to be incorporated into the new development.

A Carpet
A linear structure of three-story buildings, with courtyards, passages and irrigated gardens, is laid over the entire site – which has a considerable slope – like a carpet, analogous to an Arabian garden. We chose to “internalize” the complex, to design it uniquely around the inner needs of BBVA, given that the surroundings didn’t have much identity, there simply wasn’t much to relate to. The low-rise arrangement fosters communication: instead of taking elevators, people walk up stairs that encourage informal exchange; maximized visual transparency gives everybody a view and generates a sense of community; whilst the relatively small units permit employees to identify with their particular workgroup.

The new headquarters is designed for 6000 pax. Both the site and the scale of the development challenged us to find a radical solution – we choose to create an inward looking oasis in this otherwise anonymous urban landscape, a place that establishes a balance between the natural and the built and that functions both like a small city and a big garden.

The existing buildings are altered to tie in with the new structures, and to create offices and gardens of similar linearity and scale. They are either cut out or filled in to be integrated into the overall “fabric”.

A Southern Type of Architecture
It is a raw architecture, one where the structure is prominently expressed. It is a design that is informed by the strong influence of the solar conditions, which ultimately results in a southern type of architecture. Along the rather narrow inner gardens and streets, concrete columns and cantilevering floor slabs provide shade to prevent excessive sun, which reduces demand for air conditioning. The full height but recessed glazing provides good daylight conditions in the offices in order to minimize artificial lighting.

Along the periphery of the complex we developed brise-soleils that are fixed in between the floor slabs. Unlike the prominent modern references, these are cut out in the lower part at an angle to provide more view and daylight where protection is needed least- resulting in figurative element that vary in direction and size according to the solar angle and program. The sloping site creates another subtle yet influential consequence on the facade as the brise-soleils adjust in height.

Locating BBVA in the Madrid Skyline
A round like plaza is cut out of the carpet, and then, it is as if this mass were tilted upward to become a very slim tower to mark BBVA in the Madrid skyline. In contrast to the low-rise offices, the tower offers another type of workspace, with views across the city and to the mountains. The plaza is planted with hundreds of trees and surrounded by various communal facilities. Together, the plaza and the tower provide orientation to the entire complex. 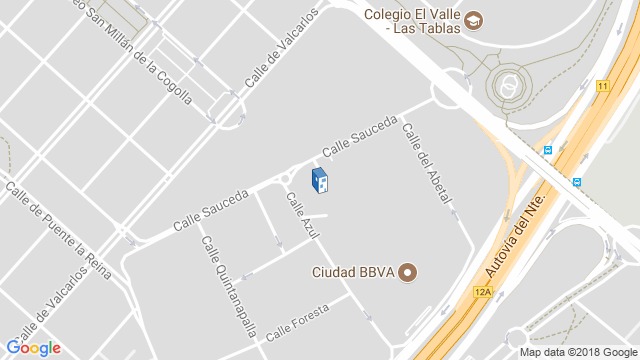 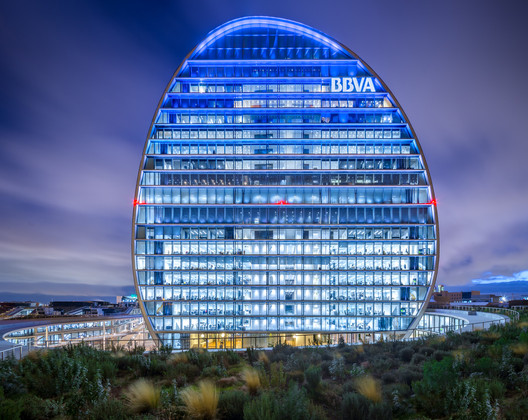