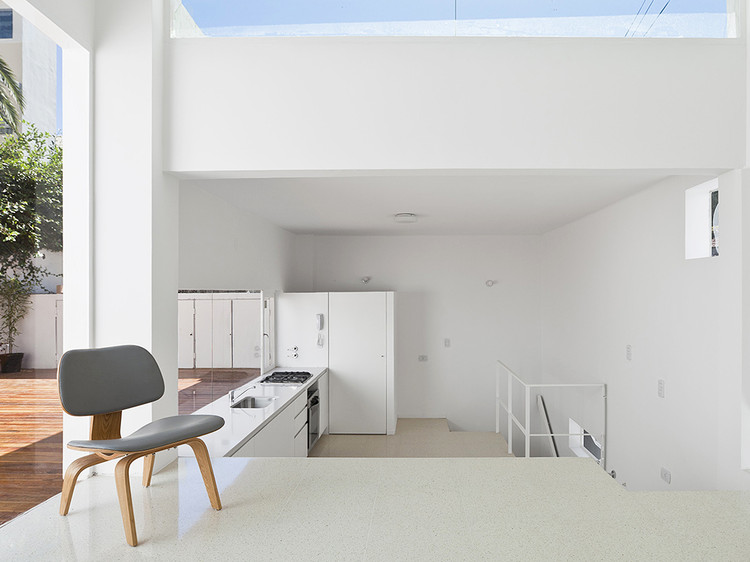 In architecture, split-level houses are typically in response to a plot's uneven or sloping topography. In the case of the houses featured here, their split level interiors are a matter of function, allowing spaces to be virtually separated by dividing them between raised and semi-subterranean floor layouts. For example, adjoining two spaces with a 50cm step up or drop off allows for separation without the use of walls or other physical barriers.

This ability to "divide two spaces" without a barrier allows hierarchies to be established between spaces while simultaneously emphasizing continuity as well. In his renowned Villa Müller, Adolf Loos illustrates this tactic, prioritizing interior spaces by placing them on varying levels. By using this Raumplan, Loos divvies up the spaces of the home based on their function while maintaining the open space.

The project focuses on highlighting the pre-existing split level between the interior and the exterior. This expands the living room over the terrace while the kitchen remains "submerged," allowing the terrace to be viewed through a horizontally placed thin glass slit.

To illustrate these split-level layouts, we've compiled a selection of 10 Argentine houses that integrate elevated and submerged floorplans to differentiate between spaces without losing their visual continuity:

*It's necessary, when designing both private and public projects, to take into consideration the needs of handicapped and elderly individuals. Check out more of our articles on Universal Design and Accessibility.