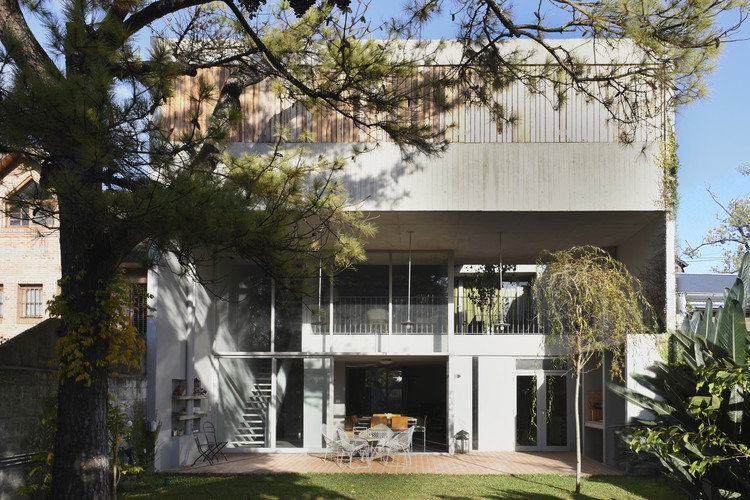 Text description provided by the architects. This house is a combination of a new architectural entity with an existing house, which has been constructed by "Federación del caucho" in a working-class neighborhood.

The house, which has an irregular slab framed with inverted beams and supported on the main walls, can be identified in most of the constructions of the neighborhood. It has a good construction quality. Now, this neighborhood has become from a working-class to a high-valued district.

The new concrete shell is the result of connecting two prisms in half levels. It avoids supporting the existing house; therefore it creates a half-cover entrance and the expansion. Over the roof of the old house we define the main space with variable height and also with a terrace, which balcony over the lateral courtyard and the gallery.

The existing house was remodeled to ensure that the front and back green areas were linked and to get more brightness. We took all the non-bearing walls and we expanded the openings of some lateral bearing walls.

The original entity is connected with the new shell without leaving its identity. However, it does not contrast with it, looking for a new and complex unity.

The raw concrete defines the new building. Shaping a shell supported by three beams of ten meters free span, it releases the eye vision of the front, back and lateral. The concrete casing with vertical tables was used to create continuity with the vertical wood. We want to highlight the tightness of the private spaces in the front and back of the house.

The existing house was covered with a rustic cement looking for a texture and color like the raw material. The connection between the existing building and the new one is a glass window. It works as a connection between the existing house and the new one.  Following the section defines the limits between "inside" and "outside". The irregular section of the shell configures a landscape over the lower slab. A wood ramp leads to a garden full of wild plants and a lot of cactus.

The unintentional contrast between the house and the local architecture is the result of the intentional decision to link the new house with the existing natural landscape and the new one, the courtyard. We want natural airflow and natural lighting all over the place.

The determination of an abstract formal concept, hanging over the existing house, creates the spaces and defines the architectural identity.  That guarantees the building as a whole.