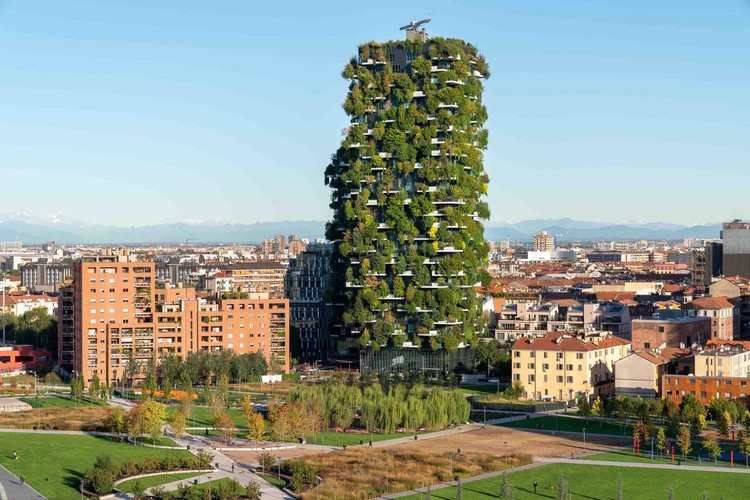 From the city’s first skyscraper in 1937, the Torre Snia Viscosa, to postwar highrises and modern towers, Milan has begun to embrace progressive ideas for urban living. With new towers and skyscrapers taking shape across Milan, the following projects explore this vertical development and how they are formed within an ancient context. Whether built as a vertical forest that explores the process of hybridization or a mixed-use redevelopment, the projects reveal how Milan has begun reaching new heights in architectural design.

To develop this project, the team immediately thought it was not interesting to rely on a single architect for the design of the whole complex, but to start a dialogue. Due to the size of the area, they decided to aspire to re-interpret the complexity of the city through many architects who brought the idea of buildings with different shapes and materials. A modular system was selected that is composed by 6 office floors with a long thin plan.

The project of Mario Cucinella Architects includes the construction of three of the seven residential towers inside the Expo Village, designed by Euromilano, within the redevelop of the Masterplan Cascina Merlata in Milan. The three buildings are located in the area north of the Masterplan and they were used as Expo Village in a first phase, then to be converted into apartments of social housing.

The PWC tower completes the business district of the CityLife master plan in Milan. Close to the center of the new grand central park it is one of three iconic commercial high rise buildings. Situated between towers designed by Zaha Hadid Architects and Arata Isozaki & Associates who won the competition in conjuction with Studio Libeskind in 2004. The Libeskind Tower draws on the sphere for inspiration and slopes inward towards it’s counterparts and the central park below.

The three buildings that divide the building space are meant for distinct but complementary functions. A tower, above all, to report a strong presence and a authentic willingness. In the tower centered on a spiral staircase-space are located the archives, the areas of consultation and the digital library: the memory of the initiatives and activities of IULM in the field of fashion, film, communication and the place of training and study.

Aligned at ground level with three of the city’s primary axes that converge within CityLife, the 170m (44-storey) Generali Tower connects with its surrounding public piazzas and park; the curvilinear geometries of its podium defined by the perceived centripetal forces generated from the staggered intersection of these three city axes at the tower’s base. This vortex of centripetal forces at ground level is transferred vertically through the tower by realigning successive rhomboid-shaped floor plates to twist the tower about its vertical axis.

The first example of a ‘Vertical Forest’ (il Bosco Verticale) was inaugurated in October 2014 in Milan in the Porta Nuova Isola area, as part of a wider renovation project led by Hines Italia. Milan’s Vertical Forest consists of two towers of 80 and 112 metres, hosting 480 large and medium trees, 300 small trees, 11,000 perennial and covering plants and 5,000 shrubs. The equivalent - over an urban surface of 1,500 m2 – of 20,000 m2 of forest and undergrowth. 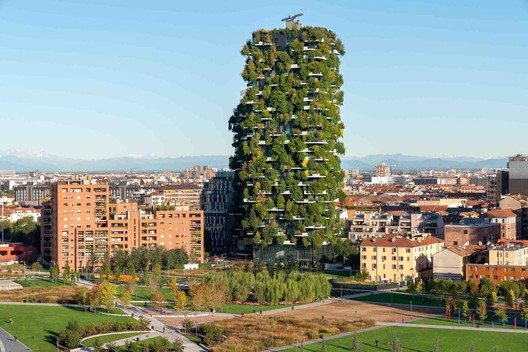