German design has become synonymous with accuracy, efficiency and precision. While the stereotype has roots in geography and local culture, the country's built environment reflects an affinity for structure, privacy and order. Combined with influences across Europe, Germany's contemporary architecture showcases refined forms and an emphasis on craft. 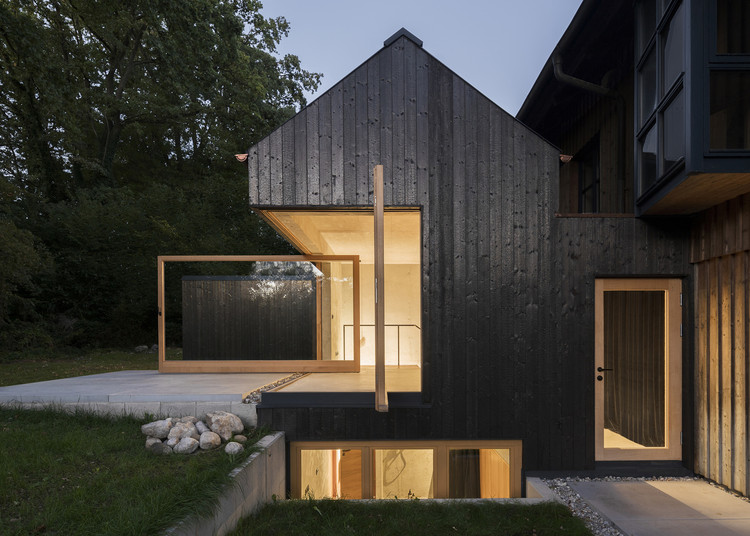 While a great diversity of buildings and structures can be seen across Germany, this variety is especially apparent from town to town. Though the country is known for the famous Bauhaus school that originated in Weimar during the 1920s, there is a wide representation of styles that evolved over the last century. Reinterpreting past traditions and building methods, from the ideas of Gropius to Mies van der Rohe, housing is one typology where Germans are building with a spirit of craft and precision. The following projects showcase a range of new homes built within the last five years.

Villa K, located in Thüringen, is the first German project for Paul de Ruiter Architects. The realization of a sustainable villa, discrete and integrated in the natural environment, was the wish of the client. The result is a straightforward, but innovative residence built from only glass, steel and concrete.

A residential ensemble of three polygonal buildings has been developed in a rural area of Lake Constance. The narrow site with its own boat ramp is situated in a privileged location on the banks of the lake. The language of the new building reflects a re-interpretation of the small scale and richly detailed character of surrounding buildings.

This compact house is divided into an open ground floor and an intimate upper story. With windows on 2/3 sides, the living area opens out onto the surrounding garden and the terraces, which sit behind the copper façade and offer a gentle transition to the outside world.

House H is located in Starnberg, created in collaboration with the Munich firm of Jacob & Spreng. The open ground floor of House H seems to blend seamlessly with the surrounding landscape. Glass and reflective facade elements made of chrome-plated steel – which provides for the necessary degree of privacy – form the almost invisible exterior enclosure of the ground-level living area.

A family owned meadow in a little village in Bavaria is the inspiration for the design of this archetypal house. Surrounded by sheds and barns the house finds its place among a wildflower meadow. Based on traditional local architecture the new two-storey house offers a place to live for a young family. The two floors are based on a strict functional separation.

A28 House by SEHW Architektur

SEHW Architektur gave new life to an industrial building in Berlin’s Zehlendorf district. Built in the 70s for business and production, it followed a functional purpose: staff area on lower ground floor, naturally lit by the shape of the topography, a big hall for delivery with machine shop on the ground floor and offices on the first floor.

Haus B is a work by Yonder for a well-known, Stuttgart-based family of architects. Before the turn of the century, the family moved into a frequently refurbished 1950s building located on a site with magnificent views of Stuttgart’s basin-shaped valley. Yonder’s task was to renovate and rebuild this existing building.

The Black House by Buero Wagner

Rural areas in Germany are often characterized by urban sprawl, faceless villages and generic detached houses. This is especially the case for the eastern shore of Lake Ammersee, which lies inside Munich metropolitan region. A contrast is formed by a small black house that stands out from its surroundings solely on account of its iconic facade.