João Luís Carrilho da Graça describes his studies, the effects of the revolution on the education system, and how he began teaching, delving into the curiosities of landscape, cities, and territories.

Past, Present, Future - PAST. Interview with João Luís Carrilho da Graça from Itinerant Office on Vimeo

GIANPIERO VENTURINI: Could you share some of the important moments and milestones that define the years after you graduated from university?

CARILHO DA GRAÇA:“The things I had begun to work with was the territory, the landscape and the city - the way the city was growing, for example, in Lisbon, where we were working very much in. The way the city was growing in this complex but beautiful territory. And that was what I was working on with my students and this was the point of departure of lots of my initial works. I also visited Porto and Álvaro Siza. I spoke with him, I liked very much the works that he was doing and in the beginning, I was also very much influenced by the position of Álvaro Siza and I was trying to do something in, more or less, the same way. Also, I was very interested in Aldo Rossi - one of the architects that was very famous in that period - and later, Rem Koolhaas.”

The architect explains what drove him into looking beyond the material taught in architecture schools, and describes how he mentally prepares for every project he takes on, the importance of architects in the field, and his numerous participations in competitions.

GV: What would you suggest to reduce the gap between architects and non architects?

CDG: “ I like very much to think that in each place or site we are going to work on, there is an enormous number of qualities. Every part of the world is incredible. So one of the things that I like to do in every work is to discover these qualities and to enhance and have the idea that after the intervention, things are better than before.”

The architect insists on keeping the same design approach he had been using in the past for his future projects, and gives advice to future generations on how to face the difficulties of a career in architecture.

GV: Are there any key concepts or terms that you are concerned with today and of the future?

CDG: “I think it would mainly be the concept of scale. I always hear elder architects saying that what they would like to do a house for a friend near the studio - something like that - where they can discuss and go to the construction site. Something simple in which they can resume what they thought about construction and architecture in their life. I think this is something interesting we can refer to - to achieve simple things in a very good way.” 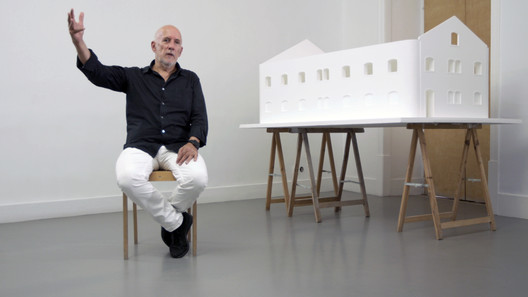