Save
Brooklyn's Tallest Building Tops Out, Designed by KPF
Share
Or
Copy

Brooklyn Point, the tallest building in Brooklyn, has topped out at 720 feet. Designed by KPF, the 68-story scheme will feature a mixed-use program of apartments, food, shopping, and entertainment functions. After undergoing a three-year design process, construction at Brooklyn Point began in the summer of 2017.

The double-height stacked frames of the exterior will form a sculptural relief, further accentuated by the corners and crown angled upwards on the northeast and southwest. Light falling on the building will create patterns from the shadows upon the custom curtain walls behind as well as emphasizing the frames and distinguished silhouette. The overall appearance and quality of the tower will sit nicely against the other City Point buildings such as COOKFOX’s City Point Tower, associated with their luxurious outlook.

A new infinity pool offering unparalleled views of New York City is also to be constructed atop the tower. At 680 feet above grade – nearly 100 feet higher than the iconic infinity pool at the Marina Bay Sands Hotel in Singapore – when completed the pool will become the “highest residential infinity pool in the Western Hemisphere."

Brooklyn Point will feature more than 40,000 square feet of shared indoor and outdoor amenity spaces, including the rooftop terrace, where the 27-foot-long saltwater infinity pool will be surrounded by a landscape designed by Nielsen Landscape Architects also featuring a sun deck, outdoor dining area, changing rooms and showers, an outdoor movie projection screen and an observatory for stargazing.

Being developed by Extell, Brooklyn Point is the final piece and only residential building to be constructed as part of the new City Point mixed-use complex in Downtown Brooklyn. At 720 feet tall (across 68 stories), the building will become the tallest in Brooklyn. The scheme marks the latest accolade for KPF, who have designed the tallest buildings in Paris (Tour First), Seoul (Lotte World Tower), Beijing (CITIC Tower), and Shenzhen (Ping An Finance Centre). Recently, the firm completed the third-tallest building in Shenzhen, and released images of their proposed Huamu Lot 10 towers in Shanghai, seeking to create a “new participatory urbanism,” as well as their scrolling tower in Tel Aviv. 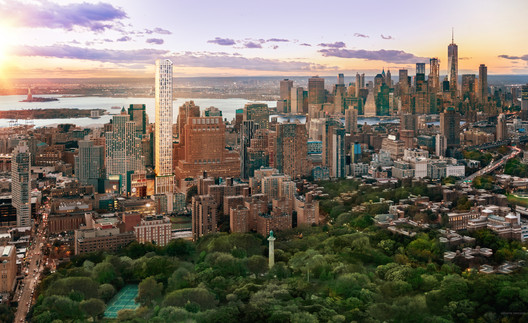