Brooklyn Point by Kohn Pederson Fox will hold the title of Brooklyn’s tallest building - although for a short while as the downtown developer craze competes for the next top spot. The mixed-use skyscraper is the final step in the City Point mega-development and is the first of Extell Development Company in the borough

After being in the design process for the past three years, construction of Brooklyn Point began this summer; it is only now that Extell is releasing the details of the tower in a new render that displays the extent of the façade.

The double-height stacked frames of the exterior will form a sculptural relief, further accentuated by the corners and crown angled upwards on the northeast and southwest. Light falling on the building will create patterns from the shadows upon the custom curtain walls behind as well as emphasizing the frames and distinguished silhouette. The overall appearance and quality of the tower will sit nicely against the other City Point buildings such as COOKFOX’s City Point Tower, associated with their luxurious outlook.

The skyscraper will include 458 residences, ranging from studios to three-bedroom luxury apartments over its 68 stories, starting from $840K up to $4million – a fair price compared to Extell’s previous one 57. 720 feet in the air, it will shortly be taken over by JDS’s 9 Dehlab Tower nearby that will surge over 1000 feet.

Still not giving away too much, Extell have confirmed that the 40,000 square feet of amenities will include ‘abundant entertainment areas’ and ‘unrivalled outdoor amenities.' The skyscraper is located at 1 City Point (previously 138 Willoughby Street) so residents will also be able to enjoy Willoughby Square, a one-acre park under development next door.

KPF's designs have always defined exuberance and ambition, being responsible for the Lotte World Tower, South Korea's tallest building and 5th tallest in the world. Their other buildings have also gained titles due to their excessive heights, including One Bayfront Plaza which is Miami’s joint tallest tower and One Vanderbilt, the second tallest in the city of New York. 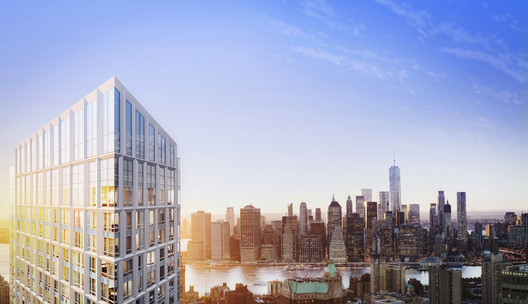