A new infinity pool offering unparalleled views of New York City is to be constructed atop KPF’s upcoming Brooklyn Point tower. At 680 feet above grade – nearly 100 feet higher than the iconic infinity pool at the Marina Bay Sands Hotel in Singapore – when completed the pool will become the “highest residential infinity pool in the Western Hemisphere."

Being developed by Extell, Brooklyn Point is the final piece and only residential building to be constructed as part of the new City Point mixed-use complex in Downtown Brooklyn. At 720 feet tall (across 68 stories), the building will become the tallest in Brooklyn – at least until it is surpassed by other planned towers including SHoP’s 340 Flatbush.

Brooklyn Point will feature more than 40,000 square feet of shared indoor and outdoor amenity spaces, including the rooftop terrace, where the 27-foot-long saltwater infinity pool will be surrounded by a landscape designed by Nielsen Landscape Architects also featuring a sun deck, outdoor dining area, changing rooms and showers, an outdoor movie projection screen and an observatory for stargazing.

Construction on the project has already begun, with an expected completion date in 2020.

Brooklyn Point by Kohn Pederson Fox will hold the title of Brooklyn's tallest building - although for a short while as the downtown developer craze competes for the next top spot.

From the soaring infinity pool on top of Marina Bay Sands to a glass-bottomed pool hovering over a mountainous Italian landscape, it's safe to say death-defying swimming elements have emerged as the most high-adrenaline trend in luxury accommodation. 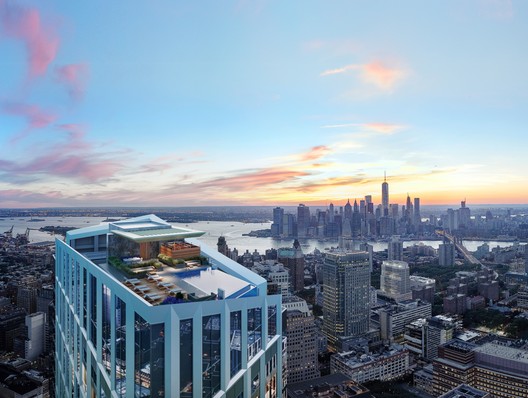