Kohn Pedersen Fox Associates (KPF) has announced the completion of the SOHO Gubei office tower in Shanghai. Inspired by the proportions of Constantin Brâncuși’s “Endless Column” sculpture, the tower manifests as an undulating obelisk with a diagonally canted zig-zag profile.

Each side of the tower’s sculptural form consists of four stacked volumes, with a series of shifted grids creating a density of wall surfaces that offer shade, reduce glare, and create a sense of urban solidity. 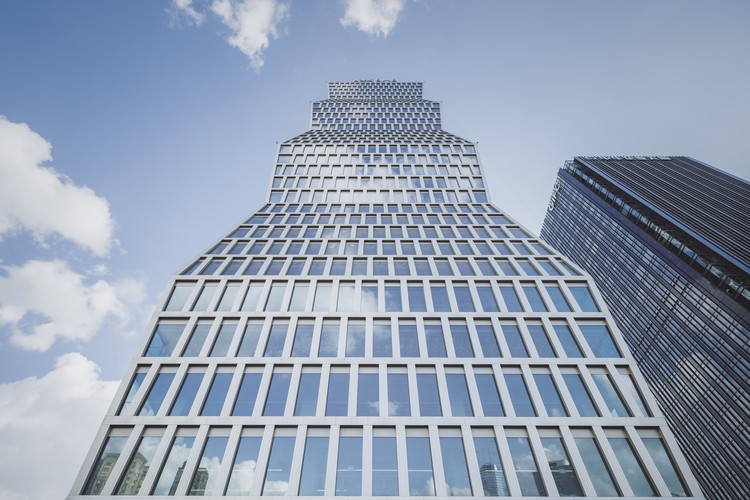 The 38-story office tower is grounded by a 12-story retail podium, the massing of which compliments the tower with a simpler articulation. The angles of the podium’s vertical planes place emphasis on the street through responding to the grain of the residential neighborhood, while at the top level, a sky garden offers dining and outdoor spaces to tenants and the general public.

Shanghai is full of tall towers, but perhaps few that make such a high priority of sculptural simplicity. In SOHO, we met a client who shared this goal. Founders Zhang Xin and Pan Shiyi pushed us to follow our initial idea all the way to completion. Together, I feel we’ve given the city of Shanghai a giant piece of public art.
-James von Klemperer, President, KPF

The building’s completion was celebrated at an opening ceremony on February 28th. The event was also marked with the inauguration of Pan Shiyi’s personal photography exhibition on display in the SOHO Gubei lobby, featuring over 80 portraits of entrepreneurs, scientists, scholars, actors, writers, construction workers, teachers, and children of Panji Village in Tinahsui Gansu.

The scheme marks the latest accolade for KPF, who have designed the tallest buildings in Paris (Tour First), Seoul (Lotte World Tower), Beijing (CITIC Tower), and Shenzhen (Ping An Finance Centre). Recently, the firm completed the third-tallest building in Shenzhen, and released images of their proposed Huamu Lot 10 towers in Shanghai, seeking to create a “new participatory urbanism,” as well as their scrolling tower in Tel Aviv.