Described as a “new form of participatory urbanism,” the scheme has been designed to accommodate large-scale artwork in a public setting, thus activating the central plaza as a cultural hub. 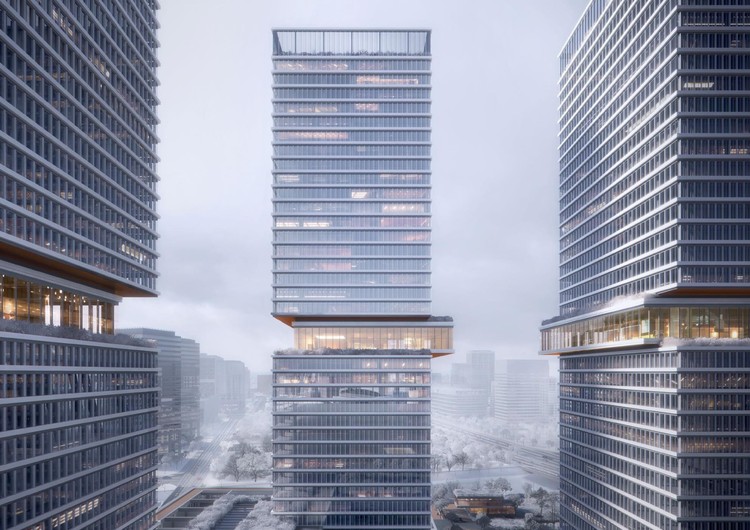 The urban significance of this cluster of buildings goes beyond their office function. They combine with a major museum to make cultural space, and create a “sky plane” above that raises the aspirations of the city.
-James von Klemperer, President and Design Principal, KPF

Each tower has been designed with an efficient, rational massing to allow for flexibility in future contexts. Glass curtain wall facades allow for panoramic views and natural light, with strong horizontal elements emphasizing rigidity.

A series of subtle cantilevers at uniform heights create a visually connected Sky Gallery, “a dramatic and iconic gesture high above the surrounding neighborhood.” During the day, stepped gardens on the building roof and terraces offer outdoor garden space, while at night, the cantilevered elements are illuminated to become grand lighting features.

The project seeks to flip the equation of a tower which typically includes an iconic top, and instead uses the gallery program as a cantilevered volume near the mid-point of the tower. The result is a moment that engages the pedestrian realm while simultaneously sculpting the project’s identity within the Shanghai skyline.
-Jeff Kenoff, Design Principal, KPF 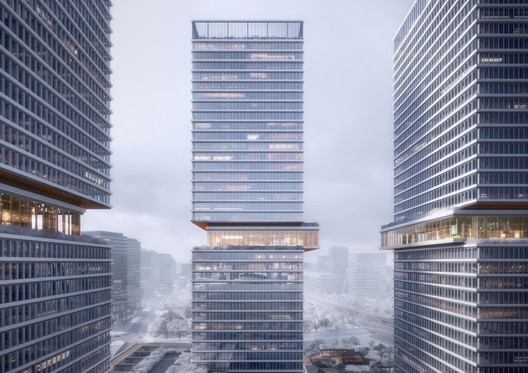