Save
4 Mega Bridges that were Never Built
Share
Or
Copy

2019 has already witnessed a series of bridge-related milestones marked, from the world’s longest bridge nearing completion in Kuwait to the world’s largest 3D-printed concrete bridge being completed in Shanghai. As we remain fixated on the future-driven, record-breaking accomplishments of realized bridge design, "911 Metallurgist” has chosen to look back in history on some of the visionary ideas for bridges which never saw the light of day.

Whether stopped in their tracks by finance, planning, or engineering difficulties, the four bridge designs listed below embody a marriage of art and engineering too advanced for their time. From a proposal for a EuroRoute Bridge between Britain and France, to a 12-rail, 24-lane bridge across the Huston River in New York, all four designs share a common, ambitious, yet doomed vision of crossing the great divide from pen and paper to bricks and mortar.

Below, we have republished the four bridges from 911 Metallurgist. For a full description of the projects, and further reading, visit the official website here. The project was developed in collaboration with NeoMam Studios, who have previously speculated on alternative designs for six British cities, as well as alternative designs for New York's Central Park.

EuroRoute Bridge between Britain and France

911 Metallurgist: In a design that would have worked for as a metaphor for Anglo-French relations, Jean-Paul Viguier’s bridge would have reached just part of the way across the Strait of Dover before plunging into the sea. More precisely, the bridge from Calais would lead to a mid-sea island, from where it would spiral down past shops, hotels, and leisure facilities into an undersea tunnel. From there, the road would rise up to an identical island off the coast of England, leading back up onto a continuation of the bridge and into a hole bored into the white cliffs of Dover.

911 Metallurgist: Gustav Lindenthal’s bridge was to have been twice the length of the George Washington Bridge, connecting New York City’s 57th Street to Hoboken in New Jersey. It was an epic vision, with room for 12 rail tracks, 24 motor lanes, and two pedestrian walkways. The 8-foot concrete cornerstone was laid on June 18th, 1895, but that’s about as far as the bridge ever got.

911 Metallurgist: John L. Smithmeyer and Paul J. Pelz drew up plans for a bridge to honor the 18th President of the United States just where DC’s Arlington Memorial Bridge crosses today. But the government was unnerved by the bridge’s association with the Union Army general and vetoed the project’s funding.

911 Metallurgist: After WW2, the great Russian engineer Boris Konstantinov proposed a stark and melancholy bridge across the same gloomy corner of the Black Sea. Work began but despite the inclusion of hefty monuments in honor of Joseph Stalin, the Soviet leader pulled the plug for economic reasons.

32 There has been increasing awareness in recent years of the importance of infrastructure for pedestrians. These additions to the urban environment improve the quality of cities by connecting spaces and shortening travel distances, and their introduction can be beneficial not only to pedestrians but also to cyclists seeking a more environmentally friendly method of transport. 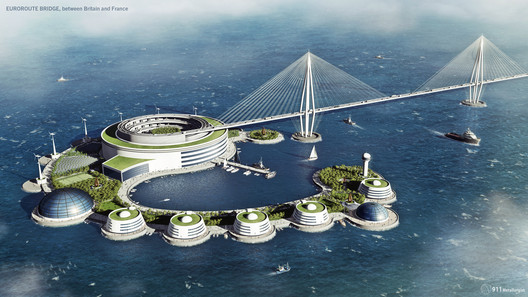