The collaboration follows on from similar previous endeavors by Neomam, who recently speculated on what New York’s Central Park could have looked like, and how six ruined British castles would look today had they stood the test of time.

We have republished the images below with an edited description by QuickQuid. For more detail on the buildings, as well as references for their creation, visit the official website here.

QuickQuid: The Royal Festival Hall is a relatively conservative construction, but only because the chosen design pipped a more imposing Brutalist blueprint in a competition to commemorate the 1951 Festival of Britain.

Sir Misha Black and Hilton Wright’s design would have dominated both the riverbank and the skyline, its imposing glazed spiral ramp leading to a 1500-ft high viewing platform across the city.

QuickQuid: Visitors to Liverpool today can’t fail to notice “Paddy’s Wigwam,” the tent shaped Catholic Cathedral at the opposite end of Hope Street from the giant Church of England Cathedral.

But believe it or not, the design could have been even more bizarre. C.H.R. Bailey’s entry to the 1959 competition for Liverpool’s new cathedral looks like it was ripped from the film set of sci-fi classic Forbidden Planet, released just three years previously.

The idea for a bridge first came about after the 1754 death of a local wine merchant, who bequeathed a small sum towards its construction. After violent riots against a toll on Bristol’s existing bridge in 1793, architect William Bridges unveiled a proposal for an overpass that would pay for itself.

QuickQuid: The architecture of Piccadilly Gardens has long been a site of controversy for the people of Manchester. But few realize it could have been settled once and for all with the construction of an art gallery on the spot back in the 1930s.

After the First World War, the council voted for the area – which had been a temporary infirmary for returning soldiers – to be partially put aside for a new gallery and library. While the gardens were re-landscaped, a competition was held, with the forerunning gallery design provided by 29-year-old E. Berry Webber.

QuickQuid: The 1960s was a swinging period for architecture, with new ideas, materials, and economic confidence rejuvenating the industry. All the same, Newcastle may seem an odd place to have become a ‘city in the sky’ – but it nearly happened.

In an effort to separate pedestrians from the modern blight of ubiquitous automobiles, Newcastle’s city planners looked up. Designs were drawn and work began on a system of overhead walkways between raised buildings. Searching for a modern equivalent, expert Professor Stephen Graham suggests that Hong Kong is one of the closest real-life ‘3D’ cities to use every dimension as Newcastle nearly did.

QuickQuid: Everyone is familiar with the way Edinburgh Castle peers down on the majestic city as it has, in many forms, for over 1,000 years.

David Bryce’s 1862 sketch for a Memorial Keep in honor of Prince Albert would have been a major change to the city’s skyline. But Queen Victoria, Albert’s widow, disapproved of the construction, and the tower was never erected. 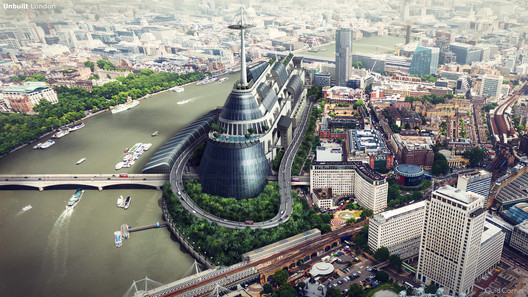