Save
Watch 6 Ruined British Castles Come Back to Life

The landscape of the United Kingdom is littered with historic castles reaching back centuries. Once proud structures commanding the surrounding countryside, many stately houses, castles, and churches have since collapsed into ruin. While the ruins evoke a sense of magic and curiosity in their own right, a study into how these castles looked in their heyday is a worthy venture.

With this in mind, Onward and NoeMam Studios have joined forces to digitally reconstruct six ruined castles across England, Scotland, Wales, and Northern Ireland. The series of gifs sees the castles fluidly re-emerge from the landscape, retelling the sense of place by showing “the true splendor enjoyed and defended by yesteryear’s barons, queens, and kings.

Below, we have laid out the series, with an edited description from Onward. Visit the official website here for more information on the castles and their legacy.

Onward: Dunluce has one of the most dramatic histories of any UK castle. Built around 1500, it was abandoned as early as 1639. The castle’s kitchen – and kitchen staff – had collapsed over the cliff edge and into the sea as the 2nd Earl of Antrim’s family sat waiting for their dinner.

Onward: King Edward II’s most powerful baron, Earl Thomas of Lancaster, built this enormous castle as a show of might when relations soured between the two men. However, the earl was captured and executed before he could enjoy his epic crib.

Onward: Architecturally, Bothwell is notable for its “cylindrical donjon” (a fortified refuge for the castle’s inhabitants), which was ruined in a series of sieges. Visit on Halloween and you may encounter the ghost of Bonnie Jean, a noblewoman who drowned crossing the River Clyde to elope with her lover.

Onward: Goodrich was begun in 1102, and strengthened later that century by the fantastically named Godric Mappestone (from whom the castle probably took its name). It wasn’t until the Civil Wars of 1642-6 that the stronghold would sustain serious damage. Cromwell’s army pelted it with 200-pound balls from Roaring Meg, a cannon built specifically for the purpose.

Onward: The UK’s only triangular castle has a triple history: built in the 1280s, it was partially dismantled in the 14th century on the word of Sir Robert Bruce, to prevent it falling into English hands. Once rebuilt, it was again taken apart after being besieged by the Earl of Sussex in 1570. Again rebuilt, a thirteen-week siege during the Bishops War resulted in one last dismantlement; and that is how the castle is to be found today.

Onward: Kidwelly was initially built as a wooden structure as the Normans entered southwest Wales, around 1106. Major stone fortification was added in the final decade of the 1300s, just in time to withstand a five-month siege at the outbreak of the Owain Glyn Dwr rebellion. 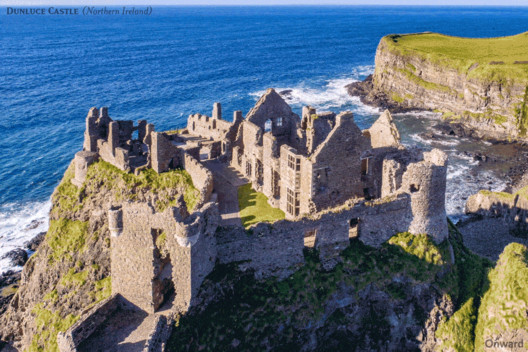