The world's longest bridge by Hyundai E&C and Combined Group Contracting is nearing completion in Kuwait. Called the Sheikh Jaber Al-Ahmed Al-Sabah causeway, the $3 billion project is one of the largest infrastructure projects in the world. Running a total length of over 30 miles, the bridge will connect Kuwait City on the south of the bay with Subiya New Town to the north. The causeway joins a larger development plan for the revival of the ancient Silk Road trade route.

The project forms part of the Kuwait National Development Plan 2035, and is named after the 13th Emir of Kuwait to commemorate his contribution to the development of Kuwait. The causeway features a 1,100-foot-long span with an asymmetric cable-stayed construction. While the current drive around the bay takes over an hour, the project aims to shorten the travel time to less than twenty minutes. Korean company Hyundai E&C and local consortium Combined Group Contracting Company won the project in 2013, and the project is scheduled to open this year. 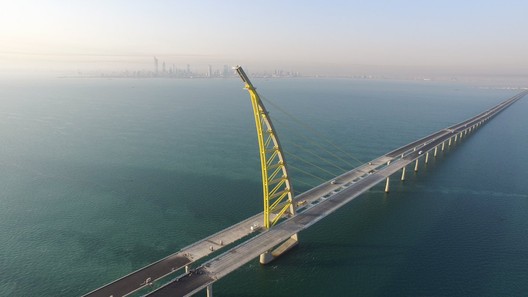