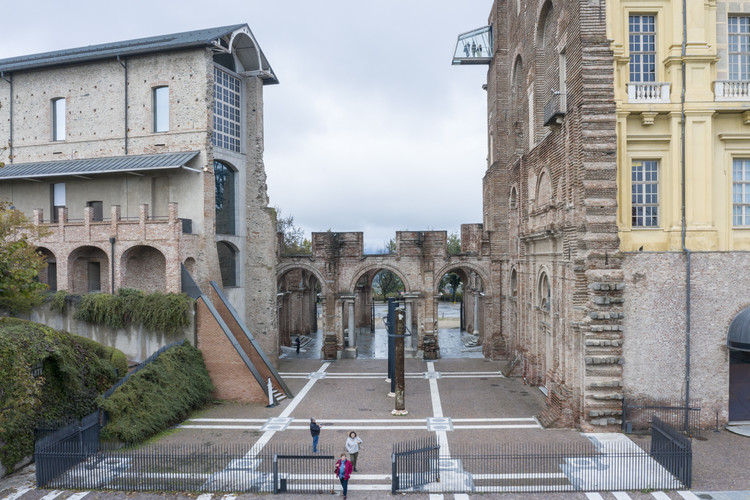 Castello di Rivoli is a building without a time and without an architect - or, to be more precise, it is a building of many ages and many architects. Its hillside site to the northwest of the city proper has long made it strategic and defensible; the first mention of a structure at the site dates back to 1159. Throughout the Middle Ages the castle passed through generations of various and venerable owners, until its first formal reconstruction in the late 17th century.

Under the hands of father-son architect duo Francesco Paciotto and Domenico Ponsello, the castle transformed from a defensive fortressto a luxury manor. It was short-lived: portions of the complex were burnt by the French in a conflict mere years after the reconstruction. But a new tone was set.

The teenage years of Castello di Rivoli were equally (and appropriately) dramatic. Filippo Juvarra’s designs were ornate and commanding, inspired by the grandeur and symbolism of Versailles. Just like the Parisian palace, Castello di Rivoli was to be the built manifestation of newly-crowned King of Sicily Vittorio Amadeo II’s power. Symmetric wings were joined by a cavernous atrium and flanked by halls of lounges and residences. Colonnades were to be the backdrop of leisured strolls, ballrooms the setting for scandal and intrigue.

Only small portions of this were ever realized. In fact, the halting of construction is still visible today: bases still await columns at the open air entry and brick stairs-to-be trail off to nowhere.

Carlo Randoni, the next architect to take over the project, had other influences in mind. A still-existing apartment on the castle’s second floor is of the English style popular at the time (made so as the Industrial Revolution skyrocketed the island nation’s growth, wealth, and outside influence.) The grand staircase so hoped for by Filippo Juvarra was finally built.

Savoy’s power as seat of the Kingdom of Sardinia waned in the late 1800s. The region was annexed by France during the Napoleonic Wars and, in 1861, lost further sovereign significance as the unification of Italy dissolved regional boundaries of power.

As went the Kingdom of Sardinia, so went the Castello di Rivoli.

Castello di Rivoli fell first into a state of insignificance, then disrepair. It was only 100 years later that fates would finally turn for the better. Andrea Bruno, an architect from Turin, was commissioned in 1961 to begin renovations on the Castello as a celebration for the centenary of Italy’s unification. The initial budget covered only basic structural repairs, but as the decade continued Bruno pushed forward with renovation, demolition, and construction. Refurbishments were completed in phases (1984 and 1986) commemorated in the walls of the Castello itself.

Bruno’s work not only revitalized the Castello for the modern age but combined and elevated the designs of his predecessors. Apartments from Juvarra were reconstructed and rooms by Randoni restored. The long-unfinished atrium was not completed, but enhanced, introducing visitors to the structure’s layered history before they even pass through the museum itself.

Indeed, Bruno’s own additions establish a constant dialogue with the building’s past. Materials and decoration are either painstakingly accurate to the past, or unabashedly contemporary. Practical circulation (i.e. stairs and elevators) is outsourced to external additions that allow visitors to view the Castello as they move between spaces. In one particularly dramatic instance, visitors in search of an overview can step out onto a glass outlook that bursts from an otherwise quiet brick facade.

The Castello today is a museum for contemporary art; a match of place and program that seems almost too perfect. The building is a layered study of history that, in turn, is host to exhibitions that seek to make sense of art’s present and future. Renovation is at the best of time technically challenging, but great renovation elevates the competing ages of the architecture in harmony. Andrea Bruno’s thoughtful work at the Castello di Rivoli tells not just the story of a building, but of the shifting tides of sovereignty and power. It may not be obviously or conventionally stylish, but it is profoundly meaningful. 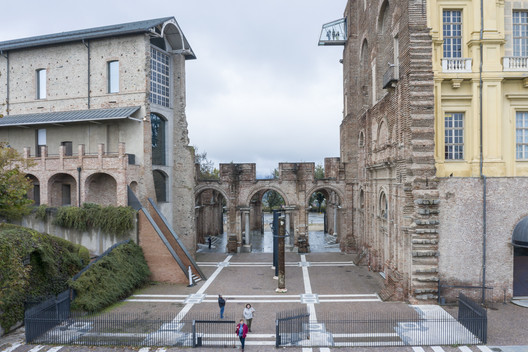