Save
History's Most Notorious Unfinished Buildings
Share
Or
Copy

Both today and in centuries past, it is a reality of building that not every project is destined for success. Financial issues or unrealistic timetables can complicate a building’s construction but, while usually the final result eventually meets the initial expectations, other times the worst-case scenario of a building being abandoned during construction becomes a nightmare come true. Unfortunately, these failed projects have an extensive history. Economic factors are the most common cause of unfinished construction, but buildings have also been stranded in limbo by wars, geopolitical shifts, epidemics of disease and other unpredictable obstacles, leaving partial structures as haunting reminders of what might have been.

Whether partially completed and left as ruins or still under construction decades (or centuries) after initial groundbreaking, unfinished buildings offer an alternative history of our built environment, promising long-delayed gratification or examples of design so ambitious that they prove impossible to realize. Initiated by civilizations across the globe, the following list details just a few examples of history’s most interesting and infamous unfinished construction projects. 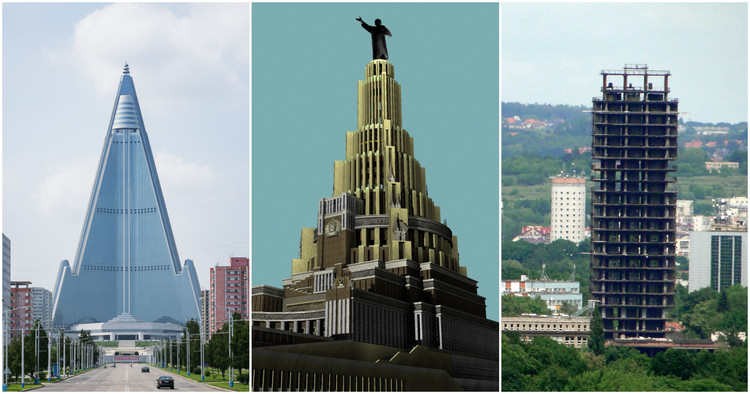 A work in progress since 1882, Antoni Gaudí’s monumental Roman Catholic Church stands amongst the most well-known examples of unfinished architecture. Gaudí took control of the project a year into the church’s construction, reshaping the evocative design that he would see only partially realized by his death in 1926. Progress was interrupted in the 1930s by the Spanish Civil War, and much of the architect’s documentation was lost when combatants destroyed his workshop during the conflict. Now in late stages of construction, the design is based on reconstructed versions and contemporary adaptations of Gaudí’s plans. With current construction funded by entrance fees from visitors to the unfinished masterpiece, the structure and all 18 of the church’s towers are expected to be complete by 2026, and all its decorative elements should finally be in place by 2032, a full 150 years after groundbreaking.

2. Palace of the Soviets, Moscow

During the height of Stalin’s rule of the Soviet Union, a design contest yielded plans for a massive new building that would house the nation’s government in Moscow. The winning design detailed an ambitious 415-meter (1,362-foot) neoclassical pyramid build of seven increasingly-narrow concentric cylinders, with the bottom ring’s footprint covering 140 meters (460 feet) in diameter. If completed, the 100-meter (328-foot) statue of Vladimir Lenin planned for the top of the palace would have projected higher than the spire of the Empire State building. Construction began on the project in 1938 but was quickly interrupted by the eruption of World War II. Steel from the building’s frame was repurposed for wartime infrastructure projects, and the palace scheme was officially abandoned by the Soviet government in 1957. The foundation was used as a public swimming pool from 1958 to 1994, and today the site supports the rebuilt Cathedral of Christ the Saviour.

The recognizable completed structure of Siena’s iconic Italian Gothic cathedral was finished in 1348, but an ambitious expansion project begun in 1339 was abandoned after less than a decade of work when the Bubonic Plague hit the city in 1348. Construction never resumed on the project, which would have doubled the size of the cathedral. Several unfinished exterior walls from the addition are still standing, and the partially-built nave floor now supports a museum and parking lot.

Shortly after moving to its current location on Fifth Avenue, The Met decided to update Calvert Vaux's initial Gothic design by commissioning Richard Morris Hunt to design the museum’s iconic Beaux-Arts facade. Featuring four prominent pairs of columns, the facade’s construction was briefly interrupted by the financial Panic of 1901, resuming in time for the project to be completed in 1902. During this period the column sets were capped with stacked pyramids of rough limestone that were meant to be carved into allegory ornament representing sculpture, painting, architecture, and music, but after the work stoppage these sculptures were never realized, and the raw stones still sit uncarved atop the order of columns.

Planned in honor of Scotsmen who died in the Napoleonic Wars of the early 1800s, the National Monument of Scotland atop Calton Hill near Edinburgh was intended as a recreation of the Parthenon, but a lack of funding left the building only fractionally complete. The project was priced at £42,000 in 1822, but after they raised only £24,000 the project’s committee was ultimately only able to afford the construction of the monument’s foundation and 12 columns. Construction halted in 1826 and the monument has remained in its unfinished state since.

Standing out prominently against the Pyongyang skyline as the tallest structure in North Korea, construction began on the imposing Ryugyong Hotel in 1987 and work on the project has been sporadic since construction was suspended in 1992. Measuring 330 meters (1,080 feet) tall, the monumental pyramid was intended to be complete by 1989, but political shifts thwarted this ambitious goal as North Korea plunged into major turmoil after the fall of the Soviet Union. Designed by the North Korea-based Baikdoosan Architects & Engineers, the mixed-use building sat as an empty concrete shell until 2008, when a financial contribution from Egyptian investors allowed for the installation of windows and the completion of the building’s exterior. The opening of the hotel was announced in 2012 and again in 2013, but those plans are currently on hold as construction continues on the project. With information tightly-controlled by the North Korean government, the detailed status of the project and the estimated completion timeline are unknown.

Designed by Enrique Gómez and Associates to be the headquarters of the Confinanzas Group in Venezuela’s capital city, construction began on this project in 1990 but stalled in 1994 after a banking crisis in the country and the death of the project’s main investor, David Brillembourg. Now colloquially known as the Torre de David (or Tower of David) in his honor, the 45-story skyscraper remains incomplete, lacking windows, elevators, balcony railings and most basic services. In October 2007 the building was taken over by Venezuelans who took up unofficial residence in the tower, constructing ramshackle housing units inside and even bringing in rudimentary electrical power and running water in parts of the building. By the late 2000s, the building housed over 5,000 residents in its unfinished shell and supported its own community and economy with bodegas, daycare centers, barbershops and gym areas throughout the building. Featured as the setting of an episode of Homeland in 2013, the tower was also the subject of a documentary and research project by Urban Think Tank, Justin McGuirk and Iwan Baan that won a Golden Lion at the 2012 Venice Architecture Biennale.

8. NOT Tower (aka Szkieletor), Krakow

Originally intended as the headquarters of Poland’s 49 regional associations of engineers and technicians, the 92-meter (300-foot) concrete building shell known as “Szkieletor” (the Polish name for Masters of the Universe villain Skeletor) stands as one of the tallest structures in Krakow. Construction began on the project in 1975 but was interrupted by political upheaval in 1981, and the site’s tricky legal status has complicated efforts to redevelop the site. After changing ownership several times, the structure spent years only occasionally wrapped in advertising billboards, before a new scheme to complete the tower was begun in 2016. With construction continuing apace, it seems this ominous and infamous icon of Krakow won't be incomplete much longer.

A descendant of his ambitious design for the modernist city of Brasília, Oscar Niemeyer’s International Exhibition Center complex in the northern Lebanese city of Tripoli was designed in 1962 but was never completed after civil war in the country forced the suspension of its construction in 1975. The site includes 15 different fascinating modernist structures on 10,000 hectares of territory, including a monumental arch, an outdoor performance space and an experimental domed indoor theater with impressive acoustic properties. Planned according to modern urbanist ideals, it remains a popular destination for architectural explorers and it continues to host an annual book fair despite its unfinished state.

Built adjacent to the Quwwat ul-Islam mosque and the soaring Qutb Minar minaret in Delhi, the Alai Minar was planned by Alauddin Khalji of the Khalji Dynasty to tower over the complex built on the remains of Lal Kot in the neighborhood of Mehrauli. Thought it was intended to stand at twice the height of the 239-foot (73-meter) Qutb Minar, the structure measured only 24 meters (80 feet) tall when construction was abandoned upon Alauddin’s death in 1316. Construction on the unfinished, undressed stone core of the project was never continued by later generations.

Correction update: This article was altered on July 23rd 2018 to add information about the recent construction progress to the NOT Tower (Szkieletor) in Krakow. 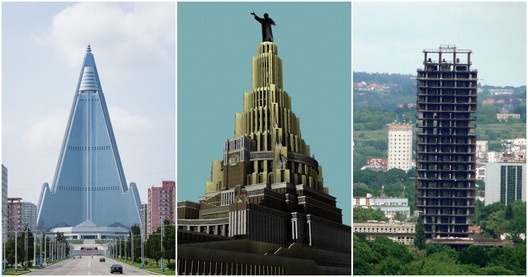