It was an early morning in Chelsea, and men in suits were standing around the street, ushering in guests into a dark, 12,000 square-foot exhibition space at the XI gallery. Inside, the room was lit by a centerpiece installation of the New York City skyline, sprawling upwards towards the ceiling with its reflection. Bjarke Ingels was going to unveil new plans for The XI (‘The Eleventh’), a pair of twisting towers set between 17th and 18th Streets and 10th and 11th Avenue. Es Devlin, a British artist who has stage-designed for Beyoncé and Katy Perry, was tapped by HFZ Capital Group to create three installations to present the project.

In the gallery, Bjarke Ingels's work is seen through a sculptural map of Manhattan constructed within a 30-foot wide concave hemisphere (Egg); a pair of illuminated towers gently rotating upon shimmering water (Dance); and a 360-degree film strip of Ingels and his sketches scrolling across a horseshoe-shaped room (Paper, Stone, Glass, Water).

“Evolution in constant motion,” Es Devlin told reporters as she gestured towards the curves of the dancing towers.

Bjarke laughed. “I’ll bring it down to pragmatism.”

Bjarke Ingels explained that because the two asymmetrical towers were situated on different plots - one along the Hudson River, the other along the High Line, they had different views of the surrounding district and could potentially obstruct each other’s views. This was made worse by warehouses along the street that were blocking views to the South.

“Which is why we opened out,” he continued, “So the tower on the river is reducing its footprint on the ground and opening up direct views for its neighbor to look out over the river.” He points towards the model of the two towers, which are twisting in opposite directions, as if through a dance, in mutual courtesy, they are enhancing each other's conditions.

“In return, at the top, the other tower diminishes its width, opening up direct views for the tower on the river to look at the High Line and over the city. As the tower re-proportions, you have some of the windows from one facade going to the other side, and you end up cutting all these corners, where windows migrate from one part of the building to the other, giving the two towers their distinguished characteristics.”

The skewing of this geometry will offer residents optimized views of The High Line, the Hudson River, Downtown and Midtown.

Bjarke Ingels drew inspiration from New York City’s classic Modernist structures and combined it with the features of lofts in the area. The facades are comprised of travertine and bronze, and the sophisticated geometry with the rows of floor-to-ceiling windows that migrate from one side of the building to the other actually lay bare the bones of the building, like a real Chelsea loft. Ingels added, “By following the columns and the grid, the result is a sort of composition that is at its core fundamentally practical and pragmatic, and also solving it in a way that is almost poetic.”

The towers will be connected by a glass sky bridge, and will have luxury residences and a hotel.

Located between 10th and 11th Avenue and 17th and 18th Streets in Manhattan, with The High Line on one side, and the Hudson River on the other, The Eleventh has some remarkable architectural neighbors. These include Frank Gehry’s IAC building, Renzo Piano’s Whitney Museum of American Art, Jean Nouvel’s The Chelsea Nouvel ('100 Eleventh Avenue') and forthcoming buildings by Norman Foster, Thomas Heatherwick and Jeanne Gang.

It will also take advantage of new developments in The High Line, designed by Diller Scofidio + Renfro and Field Operations. It is the only location where The High Line has any real manifestation on the ground, and DS+R are creating a park so that restaurants and shops at the basement of The Eleventh will expand naturally into The High Line.

When complete, the towers will be approximately 300 and 400 feet, the tallest buildings in West Chelsea. On the prominence of Bjarke Ingels’ project, Es Devlin said, “It’s a context that starts with the first time in the caves of North Spain, when somebody put their hand on the wall and said I’m here and put red mud around it, to now, when there is a hand drawing through the streets of New York and extruding a new part of the sculpture, and it’s a part of the city that will cast its light and its shadow on everyone that walks through it.” 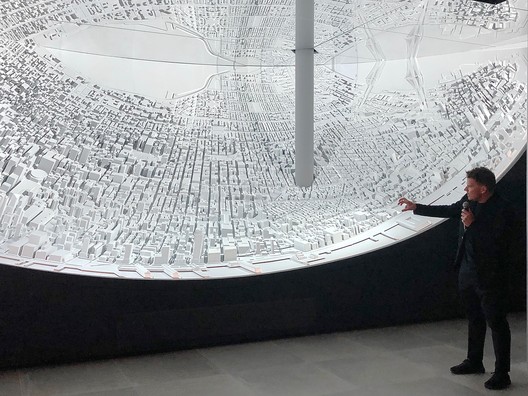