More about the curtain wall after the break.

Working with façade consultants, Front, Nouvel’s approach emphasizes the window mullions to the point that they become scattered frames. To simplify the construction process as the façade’s fragmented surface has quite varied window dimensions, megapanels that contain about 20 smaller individual windows can be used when there is a continuous vertical mullion. 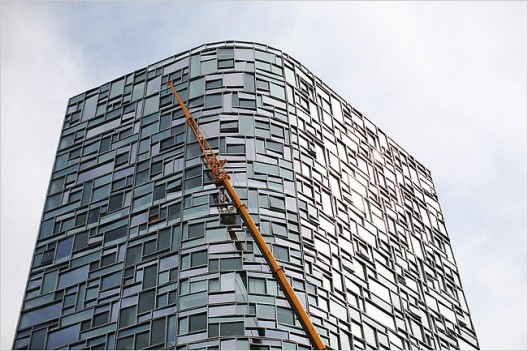 “The wall was really designed from the inside out.  A typical floor features seven megapanels, and each megapanel corresponds to a room. In the largest rooms, you have a 37-foot-wide panorama that eradicates all evidence of traditional curtain-wall construction,” Front’s Marc Simmons told Record.

Things get a little tricky when trying to support the façade, as the fragmented pattern creates non-continuous load paths. Steel was selected for the exterior structure, as its strength allows it to remains a mere 3-inch-wide.  The exterior layer is silver anodized aluminum, which is non structural, yet still holds the low-E glass panels. Different glass coatings add another layer of depth as the light plays across the façade. 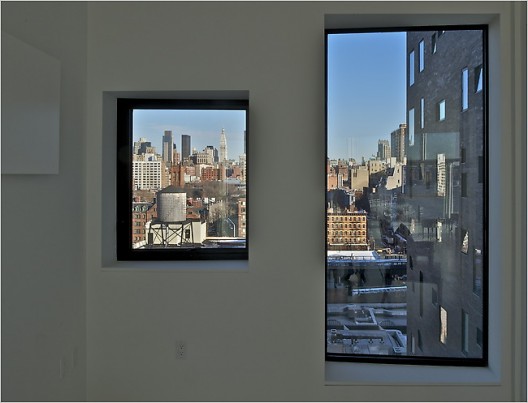 With such a dynamic façade facing the water, it is almost shocking to view the tower’s east facing façade. This surface is treated as a solid wall with specific punched openings. Yet, as Ateliers Jean Nouvel’s project manager, François Leininger, told Record, the different facades relate to the building’s drastically different contextual surroundings, “There is the contrast of wide open views to the river from the transparent steel-and-glass facade, and the specific views to Midtown — like paintings on a wall — from the punched windows of the brick facade.”