In 1961, the architect Louis I. Kahn was commissioned by the Fine Arts Foundation to design and develop a large arts complex in central Fort Wayne, Indiana. The ambitious Fine Art Center, now known as the Arts United Center, would cater to the community of 180,000 by providing space for an orchestra, theatre, school, gallery, and much more. As a Lincoln Center in miniature, the developers had hoped to update and upgrade the city through new civic architecture. However, due to budget constraints, only a fraction of the overall scheme was completed. It is one of Kahn’s lesser-known projects that spanned over a decade, and his only building in the Midwest.

Kahn’s original proposal encompassed a philharmonic hall, art school, gallery and civic theatre bound together in a large complex. Yet, troubles began early in the project as the architect’s 20 million dollar estimate dwarfed the expected 2.5 million dollar cost of the Fine Arts Center.

From 1961 to 1964, while also completing the Richards Medical Center at the University of Pennsylvania, Kahn and his office worked a series of schemes for the expansive project. A collection of plaster models held by MoMA reveal Kahn’s intention to arrive at a single entrance for all activities—accessed either by foot or car. “I think when all these activities come together, there is a kind of thing that is created,” Kahn said. “They surely function in themselves but when they come together there is something new.” [1] These interests in the relationally of building and program would, like a majority of the project, bow to economics. The mundane realities of parking meant Kahn’s intention for an elevated parking tower as part of the complex would vanish in later study models.

A more developed scheme appears to have been settled around 1964. A site plan reveals a campus of nine buildings orbiting around central courts and gardens. In this concept, the Philharmonic Hall was linked to the Theater of Performing Arts by an octagonal Philharmonic Annex bridging the spaces. A central courtyard connected these theatres to the Historical Museum, Art Museum, Reception Centre, and Amphitheatre while the School of Art occupied four separate structures at the edge of the site.[2]

However, by 1964 funding for the project was scarce. His plans for the Fine Arts Center were put on hold until 1966 when attention turned from the larger complex to the design of the Theatre of Performing Arts. Developed while finishing the Kimbell Art Museum in Fort Worth, Texas, Kahn’s concept for the articulated double-structure hinged on the notion of a violin and its case, or, as he described, a “violin inside the violin case.” The concrete “violin,” with its faceted panels, would represent the inner structure of the hall while the brick exterior, housing lobbies and adjacent spaces, would act as the violin case entirely separate from the contents within.[3]

This concept was less metaphoric than pragmatic. As the site was adjacent to railway lines, the physical as well as acoustic separation of the theatre and concert hall was a primary concern for the architect. This notion of a building-within-a-building also builds on Kahn’s interest in classical ruins and appears in a concurrent project: the Phillips Exeter Library in New Hampshire, conceived as three “rings” of ruin-like structures.[4]

The essence of the theatre also captivated Kahn during the course of the project—both in what it meant for the audience as well as the performers themselves. Cursory spaces for rehearsal and preparation were conceived as secular actors’ chapels in the lineage of the classical structures at Delphi where performers could engage with their craft.

For the audience, the experience was to be more entrancing than reflective. “When you hear the familiar strains of the Fifth Symphony, it is like a relative entering the room whom you haven't seen in a long time, and you realize for the first time that his eyes are blue,” Kahn once said. [5] A series of sketches produced between 1966 and 1968 show an ongoing struggle to negotiate form, space, acoustics, sightless, and vantage points. Thus, the concrete “violin” was conceived as an inhabitable instrument—one that allowed viewers to both see and feel as well as engage with the familiar and the foreign.[6]

Aside from the concrete interior, perhaps the most striking element of project is the anthropomorphic facade. Two broad brick arches and the nibbed beams coupled with the recessed entranceway give the appearance of a mask or face, where the arches represent the eyes while the beams suggest the nose above the entranceway or mouth. The focus on the importance of this single entrance to the structure was a hold-over from the original masterplan, where Kahn had wanted to provide a clearly delineated procession to reveal the life of the building. The two eye-like arches of the facade frame the second floor assembly and gathering spaces.[7]

By the summer of 1970, Kahn’s office had completed the working drawings for the theatre, and construction proceeded shortly after. In the end, only the Theatre of Performing Arts was completed out of the nine proposed buildings for the Fine Arts Center of Fort Wayne. The theatre was officially inaugurated in 1973, a year before Kahn’s death in 1974.[8]

Ultimately, the Theater of Performing Arts was relatively disappointing for Kahn as it represented only a shadow of the original plan and betrayed his vision for an architecture of interrelations. “Form is that which deals with inseparable parts,” said Kahn. “If you take one thing away, you don’t have the whole thing, and nothing is ever really fully answerable to that which man wants to accept as part of his way of life unless all its parts are together.”[9] As Joseph Rykwert comments, it's hard to believe that the striking face on the facade was an accident.[10] Instead, it remains a lasting testament to the negotiations and often frustrating realities of making architecture. 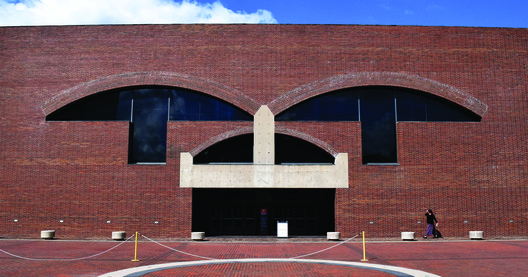