Herzog & de Meuron has released images of their proposed scheme for the redevelopment of an old brewery site on the banks of the Moscow River. The Badaevskiy Brewery project will see the transformation of a largely abandoned cluster of historic, industrial buildings, a delicate restoration project contrasting with the contemporary addition of a residential “Horizontal Skyscraper.” With this bold addition elevated on tall, slender stilts, a new ground-level public park is created to strengthen ties between the brewery site and adjacent river.

Founded in 1875, the Badaevskiy Brewery site was characterized by its brick industrial architecture, with monumental front façades masking a disorderly mesh of support buildings growing towards the river. The site has been in ruin following the brewery’s closure in the 2000s, with only two of the three original factory buildings remaining. The two surviving buildings, one Russian Romantic Revival and the other an English-style industrial cluster, have been awarded cultural heritage status mandating their preservation.

Under the Herzog & de Meuron scheme, both heritage buildings will be restored for public use. The two Romantic structures, comprising 215,000 square feet (20,000 square meters), will host a food market, fashion store, co-working space, and large gym. These independent functions are linked under a central atrium covered by historically-inspired timber roofs. Meanwhile, the cluster of English-style, brick, industrial structures are enhanced with new light wells, hosting an arts center, childcare facilities, and apartments.

The two existing wings were once linked by a now-demolished central structure. The Herzog & de Meuron strategy will see this building re-constructed to its original design using historic documents, featuring a grand hall, and a small, local brewery. Together, the three heritage buildings form the monumental heart of the architects’ vision with rear facades opening towards a park and river - a connection once obscured by redundant support structures.

Moscow is a city with a rich and controversial cultural and political heritage, with architectures reflecting avant-garde as well as conservative trends in the course of history. Our project for the redevelopment of Badaevskiy factory inserts itself in this very history and tradition of Moscow urbanism – it respects and re-uses existing industrial buildings while adding and overlaying them with radically contemporary structures.
– Jacques Herzog, Founder, Herzog & de Meuron

In tandem with this extensive restoration work, the architects propose a bold contemporary addition to the site, in the form of a “Horizontal Skyscraper” representing a “city lifted up in the air.” The scheme is elevated 115 feet (35 meters) from ground level, supported by slender stilts connecting the building to a new urban park underneath “like trunks of trees.” This radical elevation brings two key advantages: maintaining a connection between the historic buildings and adjacent river while creating sweeping views across the city from the new structure.

The new building consists of approximately 1.1 million square feet (100,000 square meters) of apartments, highly individualized in terms of layout, façade, and vista. Each apartment has a large balcony, with the gardens of eight “sky villas” comprising the roof of the hovering structure. As part of the scheme’s development, a landscaping strategy will prioritize pedestrianizing the entire site and strengthening connections between the brewery site and river. 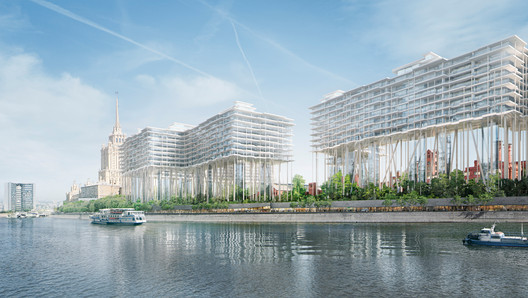