Chicago-based Skidmore, Owings and Merrill (SOM) have won an international competition for the design of an enhanced urban district in Charenton-Bercy, on the eastern edge of Paris. Working with a team of urbanists, landscape designers and community think tanks, SOM have proposed a highly connected urban landscape incorporating a 180-meter energy efficient tower, and contemporary rotunda serving as a virtual reality hub.

Formerly an industrial zone, and constrained by high-speed rail tracks, motorways, and the River Seine, the SOM-led urban strategy envisions a vibrant mixed-use neighborhood forming a gateway to Eastern Paris. A range of living options for all ages, shopping and leisure centers, and a new primary school all allude to SOM’s goal of creating one of the first urban districts with WELL Community Standard accreditation.

Similarly, a strong sustainability agenda will include greywater recycling, rainwater harvesting and a smart electricity grid. One-third of the site is reserved for green space, including a suspended ‘garden bridge’ over existing train tracks. The developer has committed to planting one tree on the site per residential unit, which at the moment stands at 1000.

In scripting the overall masterplan, we saw our role as bringing a fresh perspective from an international point of view, refined in close collaboration with our local team to ensure a sensitive integration within the existing community - Daniel Ringelstein, Director, SOM.

At the heart of the 360,000 square meter masterplan is a 180-meter tall tower containing residential, retail, and hotel space. With a highly sustainable agenda featuring 5000 square meters of interior green space, the tower seeks to create a new mode of living for the French capital, with loft-style apartments fronting onto suspended gardens. The tower sensitively integrates into the development at ground floor, with a new plaza geared towards public interaction at a human scale.

As part of a wider environmental strategy, the tower at Charenton-Bercy will become one of the most sustainable buildings in Europe - Yasemin Kologlu, Associate Director, SOM.

In dialogue with the residential tower, a circular timber frame building will form the center of a new digital hub for Eastern Paris. In response to its 360-degree context, the rotunda is raised on two sides to form a public courtyard with views towards the River Seine, whilst an interactive façade alludes to the virtual reality world within.

News via: Skidmore, Owings and Merrill.

BIG and Silvio D'ascia Architecture have released new images of their competition-winning design for the new Pont de Bondy metro station in Paris. One of a total of 68 new stations commissioned as part of Société du Grand París' Grand Paris Express project, the Pont de Bondy station will "[continue] the Parisian tradition of utilizing bridges as social spaces and cultural landmarks." 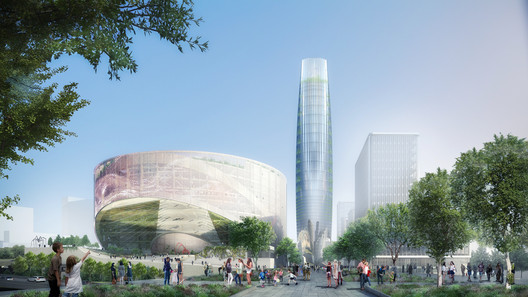