From the design team: 38th parallel is not a thin superficial line, rather a thickened situation: it has been solidified by accumulation of ambivalent emotions - tensions and relaxations - between North and South. In the proposed bathhouse, represented as a ‘metaphorical theater’, visitors (actors/audiences) coming from each side reproduce the process of such solidification while walking down the double helix ramp; experience of merging and diverging, moments of crossing uncrossable lines, while being more away from each other. Upon reaching the communal pool, all such experience is liquefied into water, and debris of emotions brought by visitors soaks into each other’s skin.

From the design team: Our project aims to explore how border functions as key element that embraces two contradicted territories into one united entity rather than separates them. By introducing an undulated line that dramatically dances in-between the two countries, a continuously weaving underground wall ties a series of collectively shared open pools and solid individual rooms with round shape geometry which is inherited from the mechanism of traditional Korean bathhouse typology Jimjilbang. By inviting natural sunlight and topographical landscape from above-ground to underground, this form creates multiple crossing-border interstitial conditions that mutually encourages people from both North and South Korea to interact physically.

From the design team: North and South. Communism and Democracy. Socialism and Capitalism. Korea has been existing within pairs of opposite features since the devision. The "Primitive Field" is about this existing condition of Korea itself. On the ground, physical materialization of the "demarcation line" will symbolize the reality of the Korean division. As approaching underground by entering into the border itself, the architecture rather dematerialize its physical presence in order to reinforce the bathhouse's social activity within the primitive field condition. The "Primitive Field" is the coexistence of over and underground and materialized and dematerialized.

From the design team: The extreme tension of the DMZ paradoxically reinforces an intense peace. With a similar intention, this project proposes to erase interpersonal conflict through a process of introspection. Guests of the bathhouse share in the equality of solitude and inner reflection, regardless of their origin or state of existence in the external world. Suspended glass vessels lower individual bathers into a vast subterranean dome, treating them to a steam, hot soak, and paralyzing ice dip in the process. A mass spectacle of simultaneous personal isolation unfolds, mirroring the human condition beyond the bathhouse.

From the design team: The addition of a bathhouse introduces leisure activities within the militarized buffer zone and ecological sanctuary of the DMZ. Water Whirl takes two existing spatial conditions - firstly the void of the DMZ, a space across which transgressions, propaganda, posturing and political relations are constantly played out, and, secondly, the highly charged negotiation spaces within the blue meeting houses in the JSA / Panmunjom - and reinterprets them into an architectural machine that uses playful spatial devices towards productive interaction and reconciliation. Using the expanded functions of a large Jimjilbang enables the programmatic exuberance to provide variety and critical mass.

From the designer: Hypotenuse thermae proposes a radical responds to the paradoxical DMZ. It creates a world of autonomy, in order to ease and accelerate the confrontation at the same time, to show a true reflection of the local context. The thermae is an exotic, consisted of traditional functions of a Roman baths and other modern social activities. All elements blended together in a complete artificial underground cave, just like the mystery vault of ancient ruins depicted by Piranesi. It is an enclave of silence, a heterotopia full of roars, an enormous mat for prayers, a palace of policed orgy.

The next arch out loud international open ideas competition will focus on a site located in Tenancingo Municipality, Mexico, and will explore how architecture can address the global epidemic of human trafficking. Information on the competition can be found here.

News via: arch out loud

Dedicated to providing opportunities for designers to explore contemporary sociopolitical issues, arch out loud is now hosting the first international architecture competition addressing the global epidemic of human trafficking. Invisible and incomprehensible to most, the issues of modern day slavery are real and widespread. 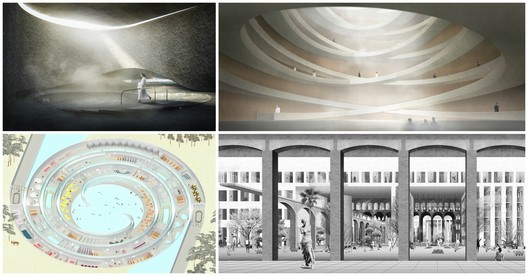