From the architects: Stranger things have happened on Mulholland Drive. Like the Chemosphere before it, this house pushes hard on the envelope of experimental residential design. A spheroid floating low to the ground on a single column, the form is the anexact offspring of more geometrically perfect round houses already achieved. It rotates, too, like Foster’s Roundhouse, but much more slowly, perhaps over the course of a year or more. In this way, the house’s many faces continually recombine visually to produce new profiles and elevations, an ever-changing, ambivalent object. The iconicity that is inevitable of an experimental house on this site is challenged, then, by its resistance to ever being viewed or read the same way twice.

From the architects: The Project arises as a respond of re-generate the site in a natural way. Mimicking the surrounding orography with a geometrical slab which reduce the visual impact and ecological foot print, containing multiple green roofs, which act as a natural cooling system and water collectors to be re used. At the center of the project an organic vain is opened to illuminate and ventilate the house in a nature way, at the same time it produce an spectacular view of the landmark Hollywood sign. Playing with geometry to open windows through the slope.

From the architects: The Last House is an experimental house for the near future. The Last House uses a combination of traditional technique and emerging technology to form a double skin roof. The Last House favors the use of passive technology systems that work in harmony with the site. The structure is nestled into the landscape to reduce exposure to heat and maximize cool air flow. The natural slope is embraced and used to define space in a house with no walls. The last house seeks a minimal impact upon its environment, yet a noticeable silver of light below the Hollywood sign.

From the architects: Integration, Innovation, Iconicity. The site is strongly characterized by the wild pattern of the surrounding nature. From here the view is open to the wide landscape, from the hills to the LA urban sprawl.The sheet music is complex, made up of overlapping signs, located on a fraught ground, characterized by icons of the global collective imaginary. The project is based on simplification, on reduction, on pure forms, on the enhancement of well-being and sustainability. The circle is the representation of these concepts, in analogy with the iconic Hollywood sign and its own shadow projected on the hills.

Learn more about the projects here.

News and project descriptions via: arch out loud. 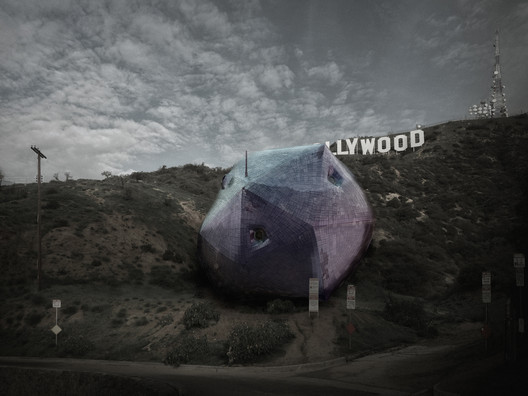