The concept is based on a dialogue between volumes made of two drastically different materials and the empty space in the middle. Apart from generating interesting spaces with three different ambiances, this could be considered a metaphor for cemetery, a place between two worlds: dead and living. Our project recognizes them both as different and bonds them together within one structure by finding a place for utilities and public spaces. All this is concealed in modular grid that sorts out space dedicated for each grave in an economic and respectful manner that does not contradict Japanese traditions nor customs.

BEYOND THE HORIZON OF CONSCIOUSNESS questions about our current concept of the consciousness and its relation to death. The project is an ‘uncanny' negation of Tokyo - the city which floods every ‘dark space’ with light and noise, the city that leads to shatter myth and irrationality. Space express itself through mimicry of cave, architecture that doesn’t have a plan or rooms. The site is a meadow interacting with users. The surface of rocks serves as a columbarium, a storage for modern ‘urns’ created from the separation of DNA. The bottom of cave consists of a main reflection space. Smaller, personal ones are located all the way from entrance to lake.

Inner Landscape is a boundary between the frantic rhythm of the city and the timeless interior space. Inner Landscape is a vertical path, hybrid interpretation of multi-storied pagoda and Japanese shrine. Inner Landscape symbolizes the Buddhist tripartition into three lands: a land of roots, a land of the middle and a plain of high heaven. Inner Landscape is death and life: a cryptic place to feel close with loved departed and a spiritual route between "artificial" pieces of Japanese landscape, that leads to the perception of the Shinto's reverence for natural artifacts.

This project explores a new way of dealing with the spatial constraint for urban cemeteries while expressing a unique approach to life and death. By having the balloons as a medium for coffin storage, we utilize the vertical space by having balloons that gradually rise up and eventually fly off. The appearing and disappearing of balloons resonate with the temporality of life. Departing from the depressing silence in traditional cemetery design, we propose a new space of tranquility created by a tower of rising balloons.

The winners of the competition will be featured in the first issue of the out lous journal, “DEATH + ARCHITECTURE,” which will be released in early 2017.

Learn more about the winners, as well as honorable mentions, here.

News and project descriptions via arch out loud. 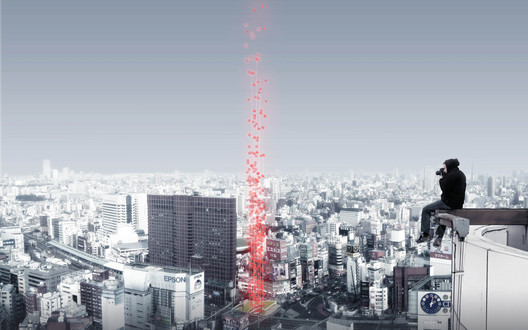