Save
The 10 Best Global* Architecture Projects of 2016 (*Asia, Africa and South America Not Excluded)
Share
Or
Copy

Ethiopia balances a decade of economic growth with increasing social, economic and racial tensions. It’s still one of the 10 poorest countries in the world, but its growing middle class (and foreign investors) demand more products and services, creating unprecedented changes in its cities.

In the capital, a new market draws inspiration from the vernacular, traditional Mercato, the largest open-air market in Africa. Eschewing the glass-clad box typology of contemporary shopping centers (which are not efficient, but project an air of “development”), the building functions as an environmentally-appropriate public edifice, with the perforations in its prefabricated concrete skin harkening back to the traditional Ethiopian fractal patterns used to moderate the entry of light. The generous interior volume encourages natural ventilation and the rooftop features photovoltaic umbrellas to combat deficiencies in the energy supply.

To the east of the province of Córdoba—in a place that doesn’t even have basic utilities—architect Nicolás Campodónico melds nature and brick into a chapel that borders an estate and opens up to an ample field. Facing the sunset, natural light bathes the chapel in warmth, serenity and symbolism. In a year when brick was lauded for its versatility, popularity and availability at the Venice Biennale, the Capilla San Bernardo brings together a precise alignment of individual bricks around an invisible, six-meter diameter sphere. The resulting structure is not only exquisite, but also echoes the shape and form of traditional Argentinian coal ovens.

Still recovering from its stigma as the drug-trafficking battleground of the 80s and 90s, Medellín is now a city transformed, and public investment in architecture has played an essential role in this renaissance. The EDU (Empresa de Desarrollo Urbano de Medellín) has been an exemplar in the initiative to bring high quality public spaces to the city, including projects like the Unidades de Vida Articulada (UVA). The UVAs are inserted into low-income, dense neighborhoods and are primarily reformulated or refurbished existing spaces that provide opportunities for cultural programming, performances and sports. EDU is a powerful example for other states and governing bodies to follow; the potential and impact of investing in architecture and urbanism can make cities better, more equitable places.

The Leixões cruise terminal is not only a beautiful physical interpretation of the flows it distributes, but also a great response to its site—at the center of the the connection of Souto de Moura’s conversion of the South Matosinhos coastal promenade and Álvaro Siza’s historic Piscinas de Marés. The building is expected to welcome over 130,000 passengers per year and it currently shares spaces with the Marine Science and Technology Park of Oporto University. Local artisans created hexagonal ceramics inspired by the Portuguese “calçada” to imbue a modern building with meaning and utility.

Le Duc Ha’s workshop sits on the edge of the Thu Bon river, which it shares with communities which work in the production of Terracotta and silk. Structured as a three-dimensional bamboo grid, the studio gives the artist the flexibility to work, have tea, rest, and store his finished works, without endangering the property should the river flood. Beyond reveling in the material qualities of bamboo and clay brick, the project is a beautiful volumetric exercise in which a permeated facade reveals little of the interior while maintaining the privacy of the artist, and allowing adequate ventilation and connection to the outdoors.

In Sierra Leone, projects like this one must deal with societal fissures, educational issues and public health crises. Orkidstudio asked, “What role can architecture play in the aftermath of such a crisis?” Avoiding a paternalistic approach and collectivizing the construction of a better future, this architecture in particular mends the wounds of a broken country. In this primary school, architecture activates and mobilizes the parts of society that will surely contribute to a solid transformation of this African nation.

China’s rapid urbanization stimulated the planning and construction of gargantuan cultural hubs as a symbol of economic development and a catalyst for tourism. The projects are often characterized by a grand formal gesture that allows it to perform on its own, detached from its contents, in an attempt to capitalize on the elusive “Bilbao effect.”

Even though China has more than 20,000 mosques around its vast territory and Islam is the third most popular religion in the country (uniting 10 of the 55 recognized ethnic minorities), the Da Chang Muslim Cultural Center is an exception. In Dachang, a Muslim enclave close to Beijing, this project reinterprets the spatial structure of the mosque, typically seen in arches, domes and Islamic symbols with new materials and an even grander scale. As a center for cultural activities, the architecture aids in bringing a physical space to a practice that has strong roots in western China as it approaches the megacities of the coasts.

Investment in Olympic infrastructure often yields better returns for private financiers than for cities. Greece, and in particular Athens, ended up abandoning much of the sports infrastructure they constructed for the 2004 Olympic Games. However, twelve years later, Renzo Piano’s project reused an old parking lot on the site of a former Olympic racetrack, bringing together the National Library and the National Opera in a single volume. Conceptually defined by its raised ground plane, Piano’s single gesture creates a new green lung in the city and reconnects the urban fabric of the port of Kallithea with the sea. The project also generates enough solar energy to be self-sufficient in terms of electricity. At a time when cultural projects are often seen as a chance to create self-absorbed, questionably appropriate icons, the Stavros Niarchos Foundation Cultural Centre is a welcome addition.

Latin American architecture has recently garnered attention for projects that re-evaluate public space in the city. A similar situation precedes many design challenges: the resources available are public and limited; the spaces created must be multifunctional to meet multiple needs; the sites are leftover spaces; and the community must care for and manage the new public space, or else it will die. Along those lines, Fernanda Canales proposed a civic and cultural module created from concrete. Its size was based upon another module: the standard dimensions of a parking space (2.5 x 5 meters), thus fitting into residual spaces in residential areas of the Latin American city. Answering multiple programmatic needs, its form is designed to optimize the internal spaces while its thermal solution also offers four configurations to cover a series of different activities. This ensures its use throughout much of the day, while at night the structure functions as a lantern, improving the safety of the surrounding environment while also assuring its own.

In the embrace of the Pacific Ocean and at the mouth of the Maule River, Constitución was one of the cities most affected by the magnitude 8.8 earthquake that struck Chile in 2010. As a result of the ensuing public-private urban transformation plan, one of the projects built in front of the city’s heart, the Plaza de Armas, was Sebastián Irarrázaval’s Constitución Public Library. Three reticulated cubes of laminated pine order the project into three thematic areas; three showcases; three invitations to enter and three spaces for those who wish to pause while walking down the street. In a city sustained by the timber industry, the architects opted to use high quality local carpenters and the abundant wood to build a project that makes the construction process and structural loads are intentionally evident. 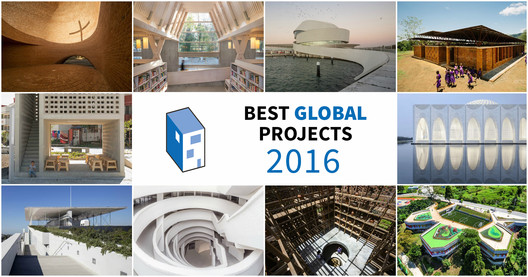