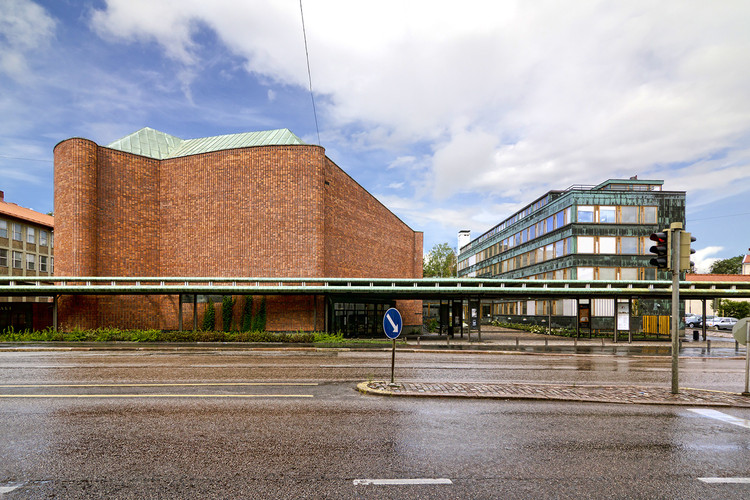 Aalto’s office was busy with a substantial workload when design work commenced on the House of Culture in 1955. Numerous other designs were still on the drawing board, ranging from a studio house in Helsinki to a large concert hall in Oulu.[2] Meanwhile, construction was ongoing on multiple other projects designed by the office – including the first phase of the Pedagogical University at Jyväskylä. However, it was the House of Culture that would emerge as perhaps the most memorable design to come out of Aalto’s practice that year.[3]

The House of Culture’s tripartite design stems from the variety of programs which were intended to take place within its walls. Serving as the headquarters of a political party meant the facility would have to be equipped for daily administrative and bureaucratic business as well as special public events, all in keeping with the political ideologies it was to represent. The two main elements of the program arose as the two main elements of the complex, the space between them serving as a public plaza and reception space.[4]

On the left side of the plaza is the undulating brick edifice of the auditorium. Constructing such an irregular form out of brick required extensive experimentation; a particular unit had to be capable of forming both concave and convex walls of varying radii.[5] The resulting bricks were not rectangular but fanned, each forming a small segment of a circle. Rounded corners allowed for greater ease of assembly, more complex play of light across the surface of the facade, and even helped to protect against fractures in the walls.[6]

Aalto had made extensive use of red brick in his previous projects, but it was in the House of Culture that he would first experiment with its use in a non-orthogonal form.[7] He would employ  a similar treatment in two other projects: the Baker Dormitory and the Otaniemi auditorium of the same year. However, Aalto would ultimately make little use of this typology in his career; after the House of Culture’s completion in 1958, Aalto would turn away from brick altogether, instead beginning to work with ceramic tile and marble sheathing during the 1960s.[8]

Visitors enter the auditorium wing by way of a vast, sweeping lobby which follows the curve of the seating in the auditorium itself. Three flights of stairs lead up and out of the lobby, their bronze handrails gleaming under the curving banks of lights above. Though primarily intended as a dramatic entryway to the auditorium, the lobby is not solely relegated to this purpose: indeed, the presence of a bandstand allows for it to additionally serve as a social hall in itself. The red tiles of the floor emulate those of an exterior plaza, further strengthening the sense that the lobby is as much a potential destination as the auditorium it serves.[9]

The auditorium is laid out as a broad, asymmetrical clamshell that is much wider than it is deep. Wrought of concrete, wood, and tile, the hall places significant importance on controlling acoustics: the materials are assembled into specialized panels that either reflect or absorb sound, based on the particular need of each part of the room. Certain panels can even be removed or interchanged based on the number of attendees and the type of event taking place, while still maintaining the general layout and aesthetic Aalto envisioned.[10]

Seating in the auditorium is broken up into various subsections, each with its own unique footprint and visual quality. The orchestra space before the stage is wide and flat, allowing for variable configuration as with the acoustic panels along the walls. Aisles divide each of the subzones from each other, as do a pair of elegantly finned concrete columns in the rear end of the room. This subdivision creates the sense that each seating zone is its own space, despite being unified in their focus on the stage.[11]

Standing in silent rebuttal to the sinuous, irregular curves of the auditorium is the administrative block. “Block” is an appropriate term for the firmly rectilinear office wing, which is also surfaced in copper instead of the unique bricks that make up its neighbor. The building’s relatively austere, formal nature is suited to its use for bureaucratic affairs, as opposed to the public gatherings in the auditorium across the plaza.[12]

Though its original patrons have since disbanded, the House of Culture has continued to serve as Helsinki’s concert hall of choice since its completion in 1958. It is, as its website states, a “magnificent building” which “exudes the atmosphere of years gone by.”[13] Age has evidently not tarnished the House of Culture’s original lustre; indeed, the building remains one of the most iconic of Aalto’s works of the 1950s. 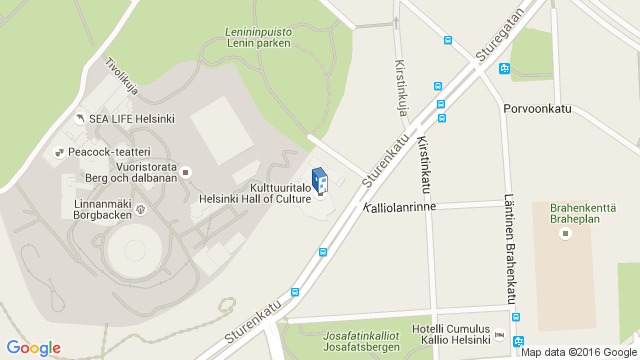