Initially, the material was enticing for sheer economic purposes – where the architect desired steel frameworks, reinforced concrete consistently proved cheaper. Working together with Max Dubois and Perret, in 1915 Le Corbusier developed a theoretical study for Maison Dom-ino, a structural frame of reinforced concrete. A pun on the Latin word domus, or house, and the game of dominos, the study intended to find an affordable prefabricated system which could solve the lack of housing left by the brutal destruction of World War I. He quickly became fascinated, however, with the remarkable adaptability of concrete, and with its sculptural and structural potential. Concrete’s ability to take any shape and to be enhanced by the surfaces of various molding forms entranced Le Corbusier, and its structural promise was foundational to the formulation of his Five Points for a New Architecture: pilotis, free facades, open floor plan, ribbon windows, and roof gardens. The most iconic implementation of these ideas was in the Villa Savoye, a pure embodiment of the Five Points.

Among its many qualities, concrete granted Le Corbusier the ability to realize his early design ideals, such as the necessity to link the machine age with classical architecture. However, the mechanized destruction brought by World War II gave him reason to critically rethink his endorsement of the machine, and it was during the postwar era that he truly began to explore the meaningful potential of concrete. Embracing both the language of the vernacular and the monumentalism of the Classical, and blending romanticism with sensibility, Le Corbusier turned his attention to the tactile expressiveness of concrete, which could evoke both a primitive purity, and enable buildings to be built on a much grander scale than before. Concerned with the concept of the architect as "poetic engineer," Le Corbusier's explorations are clearly realized in buildings such as the monastery of La Tourette, as well as the Chapel at Ronchamp.

It was during this process that Le Corbusier inadvertently invented a completely new building material. In a letter to Josep Lluís Sert on May 26, 1962, he writes, "Beton brut was born at the Unite d’Habitation at Marseilles where there were 80 contractors and such a massacre of concrete that one simply could not dream of making useful transtions by means of grouting. I decided: let us leave all that brute. I called it ‘beton brute’ [bare concrete]. The English immediately jumped on the piece and treated me (Ronchamp and Monastery of La Tourette) as ‘Brutal’ – beton brutal – all things considered, the brute is Corbu. They called that ‘the new brutality’. My friends and admirers take me for the brut of the brutal concrete!" The discovery of beton brut may indeed have added to the list of influences Le Corbusier had on the later Brutalist movement, a term coined by Reyner Banham and Peter and Alison Smithson.

The Convent de La Tourette, built concurrently with Le Corbusier's work in Chandigarh throughout the 1950s, is mainly constructed of prebricated concrete, expressed through the use of beton brut to evoke worn handicraft and natural stone construction. As Nathaniel Coleman explains in his book Utopias and Architecture, "La Tourette reveals a debt, in terms of form and material character to Le Thoronet," a 13th century Cistercian Abbey as "although the building is constructed of concrete, it is conceptualized here as an analogue of stone, a new stone, cheaper to use and easier to manipulate, perfect for construction after craft's demise."

Bare and stripped down, some of the idiosyncrasies apparent in the building are the result of Le Corbusier's appreciation of the human fallibility of his craftsmen, and his celebration of the scars of formwork. While the his contractors for the convent were well-versed in using concrete for public infrastructure, applying it in architecture was a new step, resulting in concrete skin of variable finish throughout the building. Some of the exposed mechanical systems were even accidental, although the contrast between the rough and sophisticated is mainly intentional, demonstrated through bare light bulbs set directly into the concrete. The rawness of the material shapes the spiritual nature of the space, and works to elevate the mind of the user towards the purpose of the monastery.

The Chapel of Notre-Dame-du-Haut at Ronchamp epitomizes Le Corbusier's experimentation in pushing the limits of the expressive potential of concrete. While the form maintains the appearance of a stereotomic, solid mass, the building is in actuality composed of tectonic shells and suspended planes. What looks like battered, cave-like walls are instead anything but. Three walls are supported by concrete columns nested within rubble, and a fourth is a concrete armature sprayed with Gunite. The roof, also made of concrete, departs from this solidity with a draped, fabric-like form, made of two thin concrete membranes supported by internal concrete girders and pre-cast beams. Consistent in this building is the use of concrete to continuously surprise.

In many ways, it was the poetically raw, elemental nature of concrete that Le Corbusier responded to. In Towards a New Architecture, he writes, "You employ stone, wood and concrete, and with these materials you build houses and palaces. That is construction. Ingenuity is at work. But suddenly you touch my heart, you do me good, I am happy and I say: 'This is beautiful.' That is Architecture… By the use of raw materials and starting from conditions more or less utilitarian, you have established certain relationships which have aroused my emotions. This is Architecture." 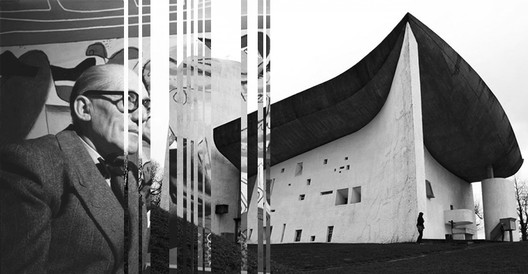