According to Rowan Moore, Stirling also "designed some of the most notoriously malfunctioning buildings of modern times." Yet, for all the "veiled accusations of incompetence," as Reyner Banham put it, Stirling produced a selection of the world's most interesting and groundbreaking buildings. Notably, the Royal Institute of British Architects' highest award, the Stirling Prize, was named after him in 1996.

The Queen’s College Florey building was the third and final building of The Red Trilogy, encompassing the Leicester Engineering Faculty building and the Cambridge History Faculty building. Within its design was held an architectural style imbued with a radically revised type of Modernism. This history faculty building (1968) at the University of Cambridge, which he designed alongside his partner James Gowan, often forced its inhabitants to "struggle to study in [an] alternately freezing/boiling greenhouse, with dodgy acoustics, frequent leaks and falling cladding tiles." Yet the architectural concepts of interweaving tension and elaboration and, according to Moore, "interplays of forces and illusions" were groundbreaking.

His 1984 Neue Staatsgalerie in Stuttgart quickly became, according to Moore, "one of the biggest tourist attractions in the country," making it "a prototype of the Guggenheim in Bilbao." After the Staatsgalerie, Stirling's work was often described as Postmodernism, a label which he himself rejected. During this time he also received a number of significant commissions, from the Clore Gallery to London's Tate Britain and the design for the new Tate Galleries in his hometown of Liverpool.

A few days after being conferred with a Knighthood, Stirling was hospitalized and died on the 25th June 1992. In recent years his work has been continually re-evaluated, leading to a number of books and exhibitions, most notably the 2012 exhibition James Stirling: Notes from the Archive in Canada. For Moore, his later work became "more likeable and less leaky". His defenders have often ascribed the technical failures of his buildings to poor construction, cost-cutting and unworkable clients.

See the work of James Stirling featured on ArchDaily via the thumbnails below, and more coverage of Stirling below those:

London Calling: The Man Behind the Stirling Prize 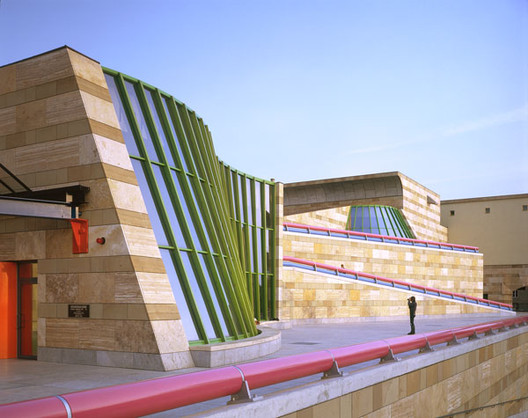