Placemaking: The Latest Architecture and News

Ever since the tramline’s closure, the 800-meter-long strip in the center of Corso Gabetti and Ponte Regina Margherita in Turin, has been abandoned. To make use of the dead area and give residents an extra space outdoors following Italy's severe pandemic repercussions, non-profit cultural association Torino Stratosferica has transformed the tree-lined strip into Precollinear Park, a temporary public space fit for socially-distanced leisure. 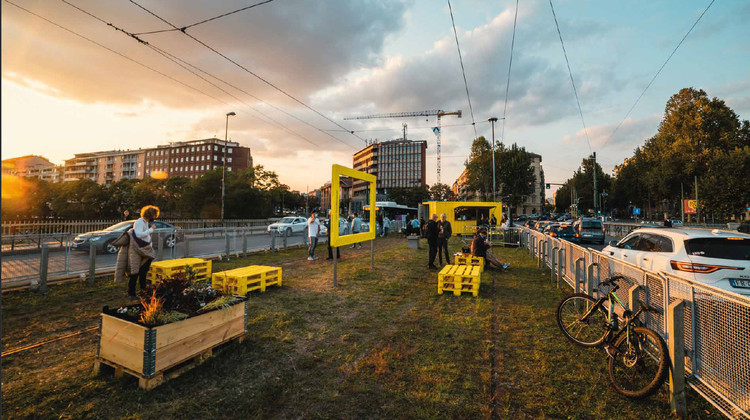 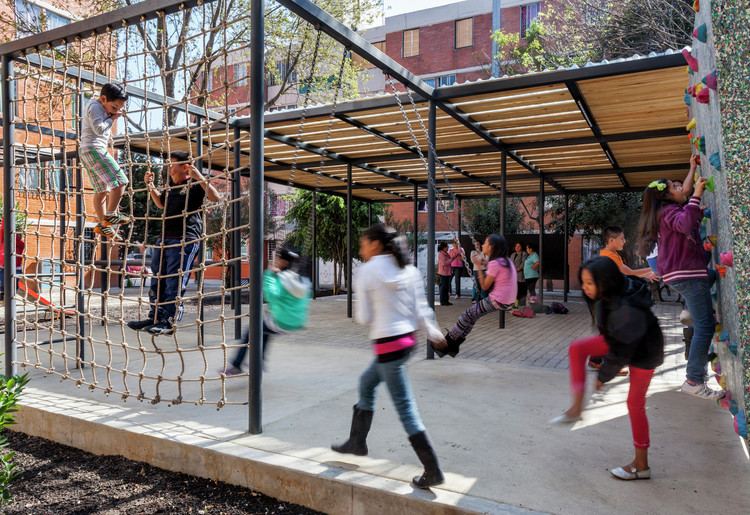 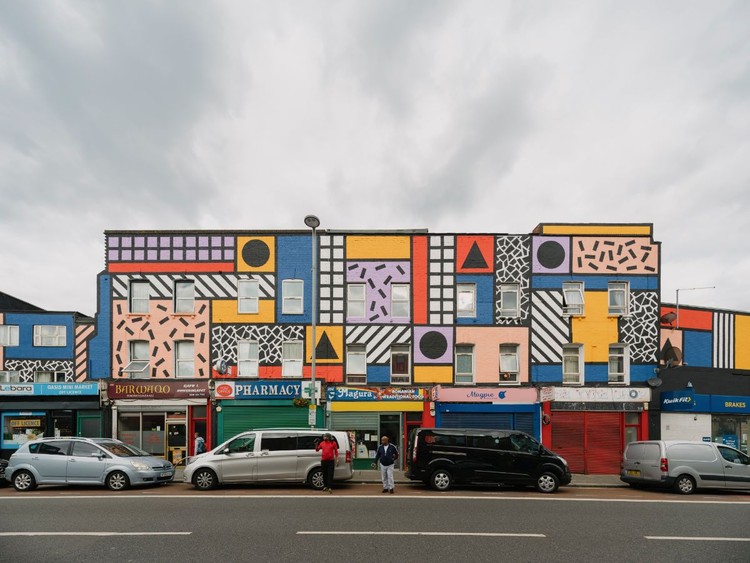 This article was originally published by Project for Public Spaces as "What makes a successful place?", a brief guideline about how to develop great public spaces by following four qualities: Sociability, Uses & Activities, Access & Linkages, and Comfort & Image.

Great public spaces are those places where celebrations are held, social and economic exchanges occur, friends run into each other, and cultures mix. They are the “front porches” of our public institutions – libraries, field houses, schools – where we interact with each other and government. When these spaces work well, they serve as the stage for our public lives, but what makes some places succeed while others fail?

Public Play Space (PPS) is launching a Call for Best Practices for projects and concepts focusing on innovative and creative practices for the co-design of inclusive, cohesive, and sustainable public spaces and cities, through the use of games and digital technologies.

PPS is a project co-funded by the Creative Europe programme of the European Union, aiming at exploring the development of innovative and creative practices for the co-design of inclusive, cohesive and sustainable public spaces, through the use of games and digital technologies.

This Call is an opportunity to present your project at the European scale! PPS is looking for best practices

ShopSmart on Redchurch is an ideas competition that will explore ways that placemaking and technology can bring character, activity, community and economic success to Redchurch Street in Shoreditch, London.

The brief invites new ways of thinking about the connection between retail technology and the public realm. Entry is free and we are open to submissions from students or professionals - we want creative thinkers from all industries, including architecture and urban design, landscaping, lighting, artists, tech etc.

The judging panel is chaired by Sir Peter Cook. Five shortlisted entries (individuals or teams) will received £1,000 and there is the potential for

Open Call: design the next generation of multimodal parklet

In partnership with Better Block Foundation, Spin is launching an open call for designers, urbanists, architects, citizens and anyone who cares about safer and more livable streets, to design an on-street parklet prototype that blends the traditional parklet, bike corral, scooter parking, and bus shelter with placemaking.

Finalist teams in the design competition will receive $1,500 towards fabrication costs, plus mentorship and support from Better Block Foundation, and up to $1,500 in travel budget for domestic U.S. travel to Denver, Colorado.

All finalist designs will be built and installed in Denver, Colorado, and rolled out on National Parking Day, September 20,

Cultural flagships, from trendy breeding grounds to iconic cultural palaces, form the core of many urban cultural landscapes. Spaces of Culture is about the new construction and redevelopment of cultural buildings in Amsterdam in the period 2000-2016.

In the construction and development of new cultural spaces in the city, the precise location and architecture play a major role in connecting the venue to the changing needs of the public, the makers and the neighbourhood. Using various case studies, Spaces of Culture shows that the cultural sector could benefit from knowledge exchange between urban planners, developers and the world of architecture.

Beloved by architects as the most original and successful of the mid-twentieth century’s wave of ‘New Towns’, and famously ‘different by design’, Milton Keynes (MK) has successfully reinvented itself as a ‘Smart City’ and is a key contributor to the United Kingdom’s knowledge economy.

This success has highlighted the need for a university — MK is the largest urban area in the UK without its own university — and to resolve this, MKC and Cranfield University, a global leader for postgraduate

This Week in Architecture: What Makes a Place?

It’s well understood that a sense of place is an essential value for people, architecture, and cities. Everyone from designers to planners to city governments speak breathlessly of the power of places to transform cities for the better - but it’s not clear what placemaking really means.

The Rudy Bruner Award for Urban Excellence (RBA) celebrates transformative urban places distinguished by their economic and social contributions to our nation’s cities. Winners offer creative placemaking solutions that transcend the boundaries between architecture, urban design and planning and showcase innovative thinking about American cities. One Gold Medal of $50,000 and four Silver Medals of $10,000 will be awarded.

Amongst other placemaking-related news this year, the Boston Society of Architects’ Placemaking Network celebrated its 10-year anniversary by launching the Placemaking Manifesto in November. Co-authored by Christina Lanzl, Robert Tullis, and Anne-Catrin Schultz, the document set down six key ideas: “quality of life,” “sense of place,” “community identification,” “collaboration and communication” between “individuals of all backgrounds, interests and talents,” “inclusivity” and “greater civic engagement,” and “awareness of tradition with an embracing of new and emerging technologies.” While the basic principles that placemaking espouses are often hard to question, this manifesto in particular begs one question: Is placemaking understood and defined clearly enough for it to be a useful tool for urbanists?

In the past decade or so, placemaking has gained considerable momentum, spewing forth an array of approaches, countless lists of best practices (including, in essence, this new manifesto), and complicated sub-categorizations. It is simultaneously a much-lauded global movement, an academic discipline, a field, discourse, process, and tool, but is also, among other charges, heavily criticized for being an “ill-defined buzzword.”

For the last 30 years, street furniture and outdoor advertising have defined the grammar of our cities. In Public-Private-Partnerships (PPP), cities award long-term licenses for advertising in public space in relation to the partly necessary urban furniture and their maintenance (bus stops, public bathrooms, benches, trash bins, signposts, etc.). The business model is dominated by the few large, globally oriented companies with profits running into billions. For instance, for years Berlin has been “supplied” by the Wall AG - part of the international JCDecaux group as the number one outdoor advertiser worldwide since 2009 (with a turnover in 2014 of 2,8 billion euros in more than 60 countries with 11.900 employees).

The 2017 SEGD Global Design Awards, the only international awards program focused on user experiences in the built environment, is now open for entries.  Since 1987, the SEGD Global Design Awards have set the standard of excellence for environmental graphic design and experiential graphic design, honoring design work that connects people to place by providing direction, content and compelling experiences in public spaces.

Gentrification's Image Problem and How It Has Been Villified

The idea of revitalizing a public space by bringing improvement that brings people together should not generate suspicion or fear. However, specific examples of places that have seen the cost of living greatly increase after their revitalization have been creating paradoxes. After all, does this "new villain" called gentrification have any relation to placemaking?

The answer, unfortunately, is yes. Although it's not a direct relation of cause and effect, it is impossible to deny the tenuous line between the two concepts. By definition, gentrification, or "ennoblement," refers to the social, cultural, and economic improvement of a neighborhood or, on a larger scale, of an entire region. Placemaking is the process of planning quality public spaces that contribute to the well-being of the local community. The concepts may be similar, but the methods and consequences of the two are very different.

Knight Cities Challenge: Open Call for Civic Innovators around the Country for Their Best Idea

From Charlotte, North Carolina, to San Jose, California, cities around the country are looking to address major challenges and build more successful communities. The Knight Cities Challenge, which opens today, is an invitation to engage in that process. It asks civic innovators to answer the question: What’s your best idea to make cities more successful?

The Rudy Bruner Award for Urban Excellence (RBA) celebrates transformative urban places distinguished by their economic and social contributions to our nation’s cities. Winners offer creative placemaking solutions that transcend the boundaries between architecture, urban design and planning and showcase innovative thinking about American cities. One Gold Medal of $50,000 and four Silver Medals of $10,000 will be awarded.