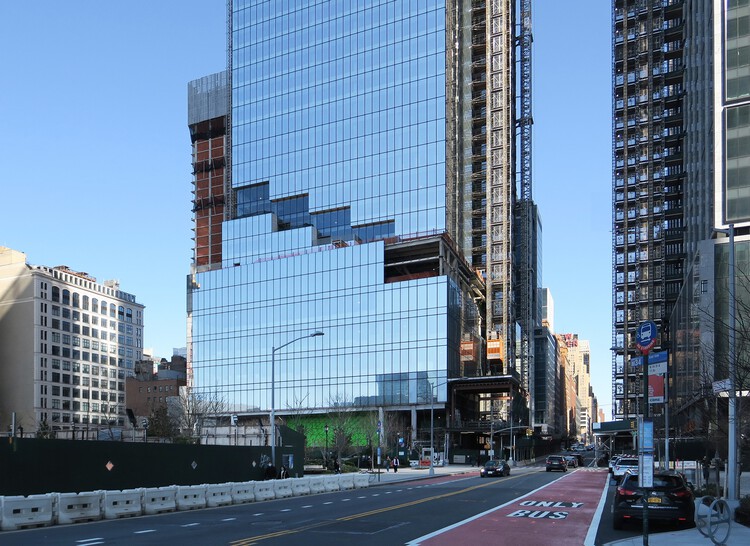 Mausoleum of the Martyrdom of Polish Villages / Nizio Design International 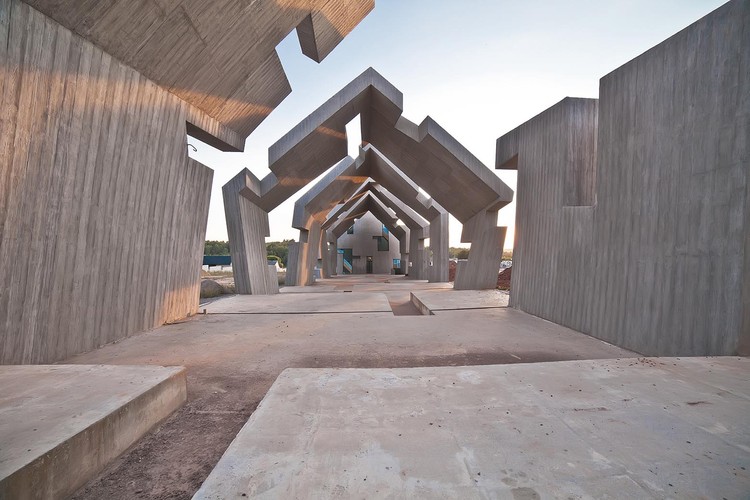 As part of a collaboration between the Centre Pompidou and the Mao Jihong Arts Foundation, the Cosmopolis #1.5: 'Enlarged Intelligence' exhibition features the developments of NLÉ Makoko Floating School. The Minjiang Floating System (MFS IIIx3), the fourth prototype and the third iteration of the prefabricated self-built system for water, investigates methods to counter the challenges posed by urbanization and climate change.

Earlier prototypes of the Makoko Floating School include the Waterfront Atlas (MFS II) launched in Venice, Italy and the Minne Floating School (MFS III) in Bruges, Belgium. The project, initially developed for the water in Lagos, is now usable in all these sites including the Jincheng Lake in Chengdu. 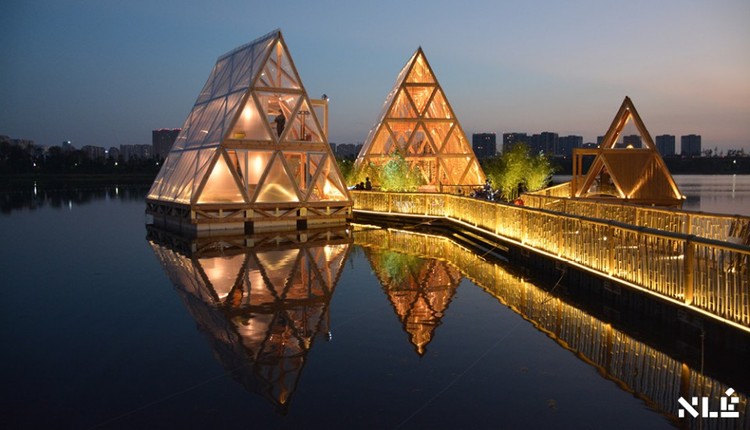 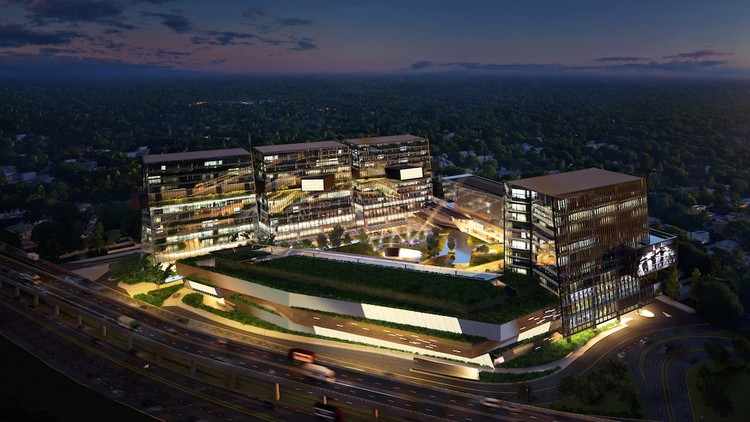 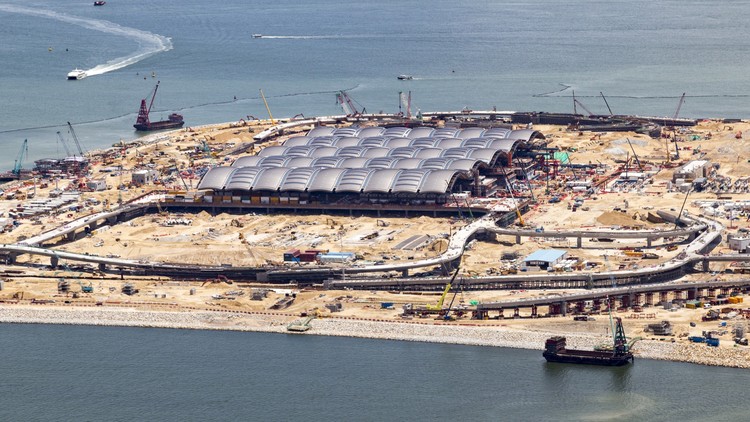 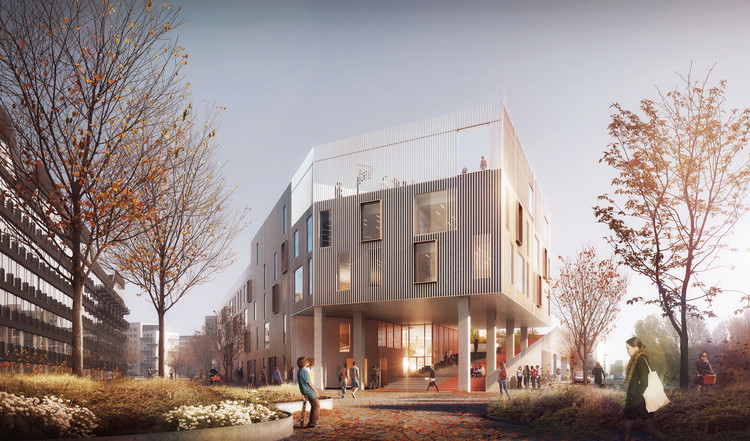 “Smart cities” are the latest urban phenomenon popping up across the globe. Among the newest being realized will be Union Point, a masterplan with a commitment to innovation located just south of Boston, USA.

What is a “smart city?” It is a city in which embeds multiple data collection technologies within the city in hopes of providing a supportive and competitive advantage to the city’s residents and business. Officials then use this data to make their cities safer, healthier, and more efficient. Cities are not geniuses quite yet, but the “smart city” is rethinking the way cities are run. 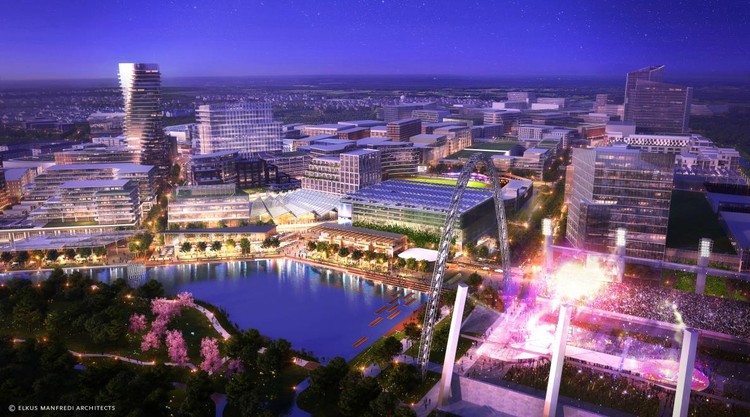 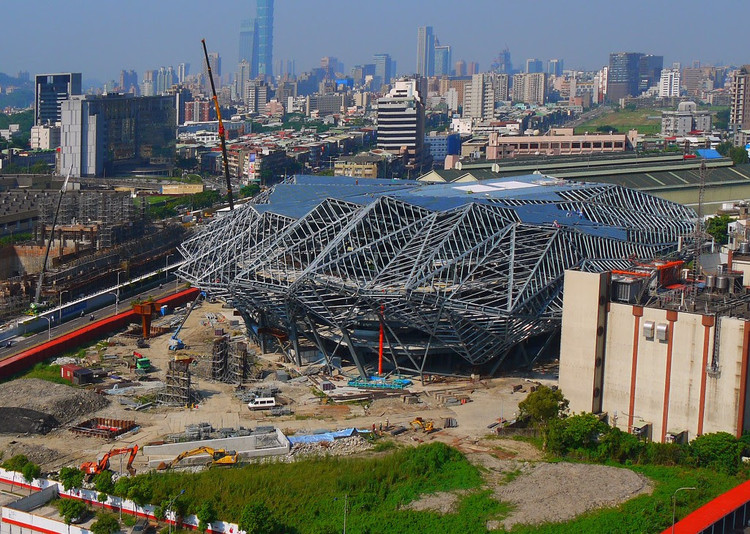 S9 Architecture’s Dock 72, a 17-storey commercial office project expected to bring 4,000 workers to the Brooklyn Navy Yard area, has been topped out this month marking the completion of the building’s steel superstructure.

Over 350 construction workers, local business leaders, community representatives and public officials attended the ceremony, which ended with the raising of the final beam signed by all the members of the Dock 72 team.

J. MAYER H., in partnership with Architekten, celebrated the groundbreaking ceremony for their competition-winning Pavillon am Ring Project in Freiburg, Germany. Located at the edge of Freiburg’s historic district, this new tram stop will feature a café and dynamic roof structure.

How to Design a "Building that Breathes": A Sustainable Case Study of Colombia's EDU Headquarters 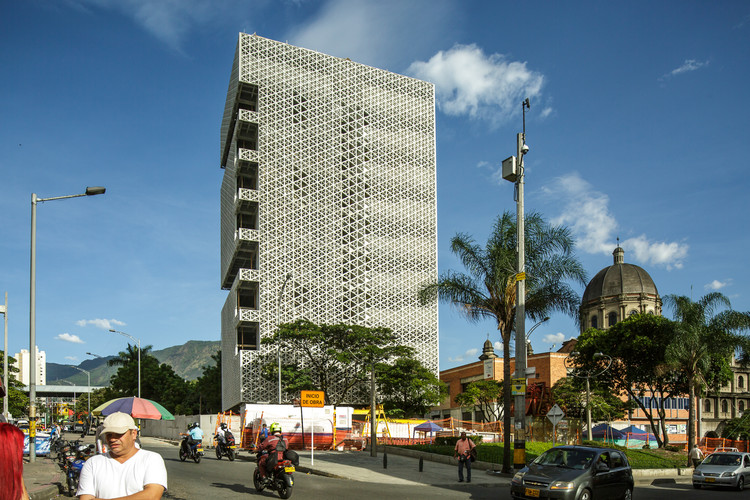 Construction is now underway on Columbia University’s new University Forum and Academic Conference Center, designed by Renzo Piano Building Workshop and Dattner Architects. Located at the school’s new Manhattanville campus at the corner of West 125th Street and Broadway, the 55,980 square foot building will serve as a new home for academic conferences and a meeting place where scholars from many fields can gather to share ideas.

Vincent Callebaut Architectures has released in-progress images of their Tao Zhu Yin Yuan sustainable tower, under construction in the Xinjin District of Taipei City, Taiwan. The tower’s rotating form draws inspiration from the double helix structure of DNA and will be covered in 23,000 trees in its aim to become a pioneering sustainable residential eco-construction that finds “the right symbiosis between the human being and the Nature.” 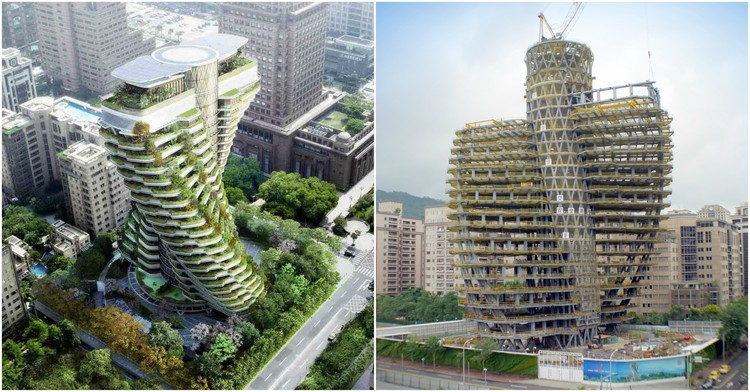 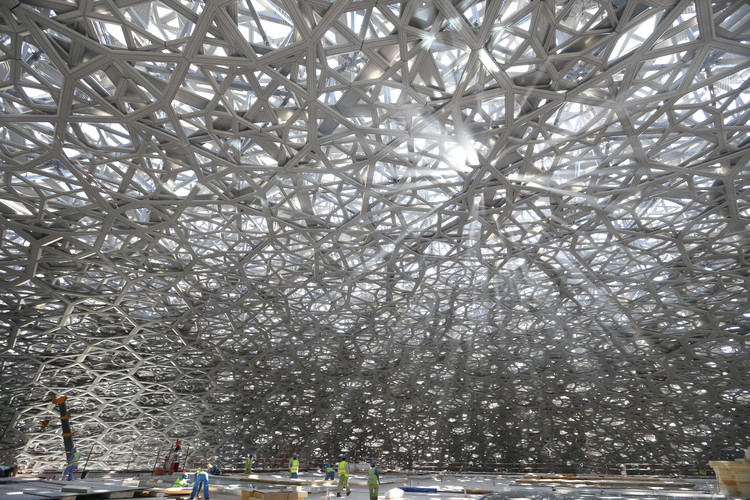 Henning Larsen has been selected to design a pavilion for Denmark for the 2016 Summer Olympics in Rio de Janeiro. Opening on Ipanema Beach from August 4-21, 2016, the pavilion – named “The Heart of Denmark” – will feature a tent structure that utilizes building techniques appropriated from sailboat construction. Inspired by Denmark’s maritime history, Danish architecture, the landscape of Rio de Janeiro and the buildings of Oscar Niemeyer, the pavilion will marry aesthetic iconography of both Denmark and Brazil.

After the Bolsheviks secured power in Russia in the late 1910s and eventually created the Soviet Union in 1922, one of the first orders of business was a new campaign, Novyi bit (new everyday life), which sought to advance many of the most hallowed causes of their newly minted socialism. The initiative’s great success came from the bold designs of Constructivist artists such as Alexander Rodchenko, Vladimir Mayakovsky, and Lyubov Popova. Using a high-contrast visual language and a combination of words and symbols, the graphics were arresting and comprehensible in a post-tsarist country that was largely illiterate, and became some of the most recognizable examples of twentieth century graphics and political propaganda.

It's hard not to see the connection between the styles of the Constructivists and the unusual graphics created by NL Architects in association with BeL (Bernhardt und Leeser) Sozietät für Architektur BDA for their competition-winning proposal for Hamburg’s St. Pauli neighborhood, consisting of an urban plan of housing and other amenities at the former site of Esso Häuser on the Spielbudenplatz. And, while this stylistic connection may not have been intentionally drawn by the architects - the inspiration for the graphics is not mentioned in the four-page project description - it is oddly appropriate for this particular development. 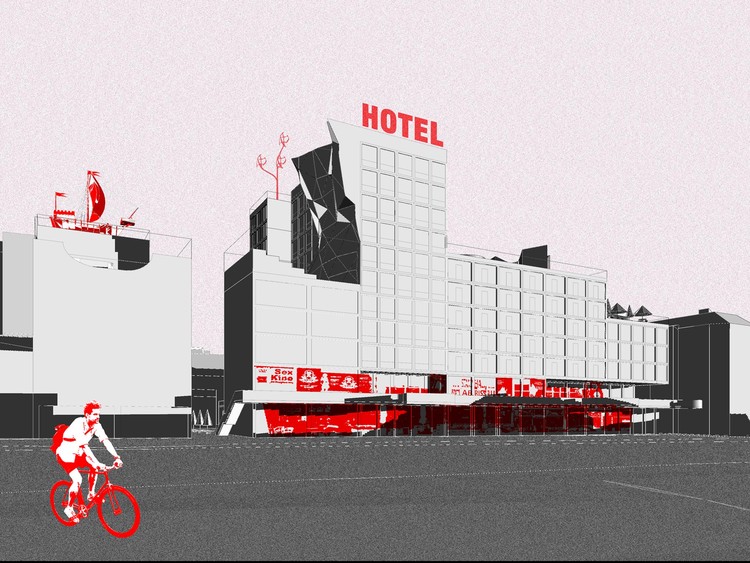 Selected as the winner of an international competition, Penda’s landscape pavilion for the 10th international Garden Expo in Wuhan, China seeks to highlight the importance of clean water and protecting the environment. Dubbed “Where the River Runs,” the pavilion takes visitors through a landscape of hills and valleys on a pathway resembling a river. Each visitor is given seeds to plant, taking over “the function of a river as they bring life to the pavilion.”

The 1,500-square-meter-pavilion is currently under construction and is set to be completed this year. Learn more about the design after the break. 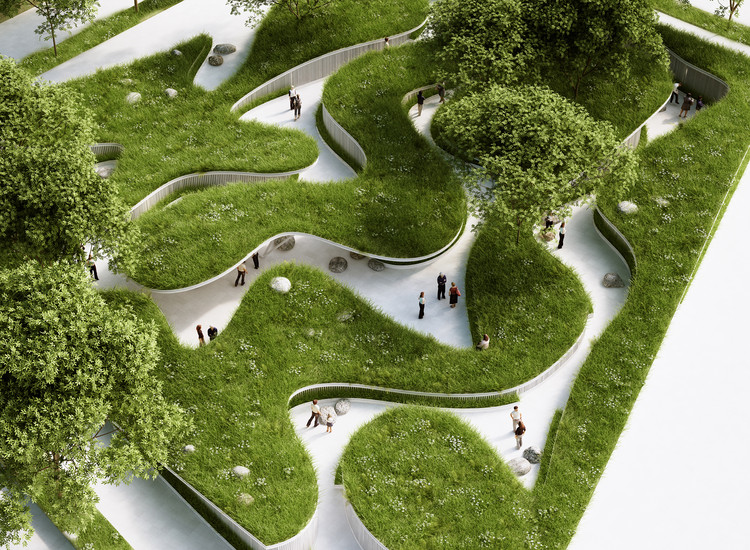 Five years after Studio Architektoniczne Kwadrat's design was selected as the winner, the Museum of the Second World War in Gdańsk, Poland is nearing completion, with a deadline set for Summer 2016. Presenting the narrative of the Second World War in a comprehensive way, the museum will focus specifically on the war’s impact on the everyday life of civilians and soldiers. The choice of Gdańsk as the site of the museum is also significant – not only was it where the war broke out, it was also where Solidarity emerged during the post-war division of the world. 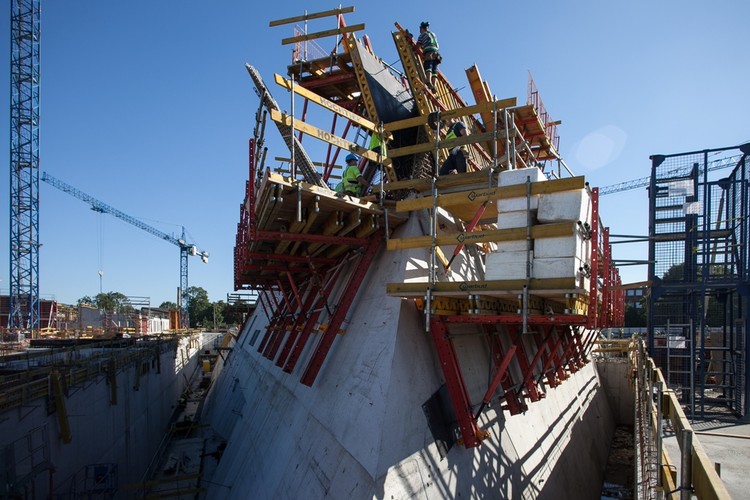 133 years since the laying of its foundation, the construction of Antoni Gaudí's Sagrada Família has entered its final phase. This news was announced in a recent press conference by the project's directing architect Jordi Faulí, who will oversee the completion of six new towers that will raise the "Tower of Jesus Christ" to 172.5 meters-tall, making it the tallest religious structure in Europe and Barcelona's tallest building.

The final stage will include the construction of the 172.5 meter Tower of Jesus Christ, as well as five other 135-meter towers honoring the Virgin Mary and the four apostles.

More information and a video after the break.

Overlapped with commentary by the late Steve Jobs, a new video update by drone pilot Duncan Sinfield has captured Apple Campus 2 taking shape. According to the report on MacRumors, work is still being done on the main building's multi-level underground parking structure, while the west campus parking structure is nearly complete. The auditorium now has interior walls and progress is being made on the Tantau development housing research facilities.

Vo Trong Nghia Architects has begun work on FPT University Ho Chi Minh City, a building set to begin a renewal of the natural landscape previously destroyed by mass development. In the city of Ho Chi Minh, Vietnam, only 0.25% of the city is covered in greenery, contributing to environmental stress on its infrastructure - frequent energy shortages, increased pollution, and rising temperatures are more common as the city grows. Read more after the break

In Progress: National Kaohsiung Center for the Arts / Mecanoo 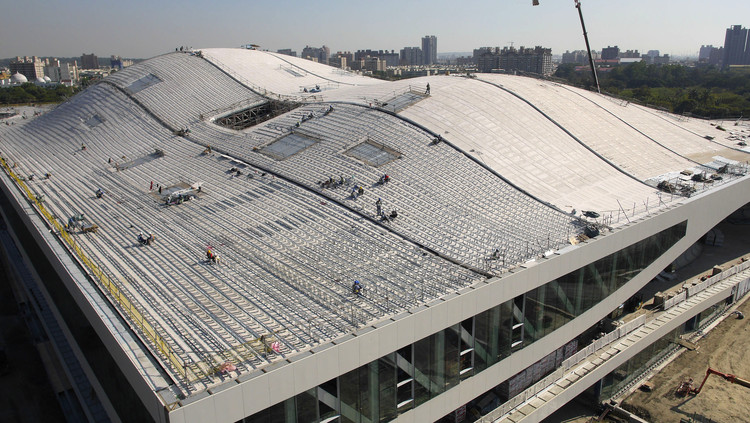