Save
Socialising, Commerce, and Trade: The African Market Hall in a Modernised World
Share
Or
Copy

A few months ago – in July 2021, the 47-year-old Kariakoo Market went up in flames in Dar es Salaam. Designed by Tanzanian architect Beda Amuli, the market is a central landmark – a key part of Dar es Salaam’s commercial hub. Early images of a new Kariakoo Market show a taller structure, with six floors compared to the three in Amuli’s design. Conversations on social media have abounded on the new design, and if a “tower” typology is really the appropriate choice considering the unpopular nature of other similar “tower” market halls in Dar es Salaam. 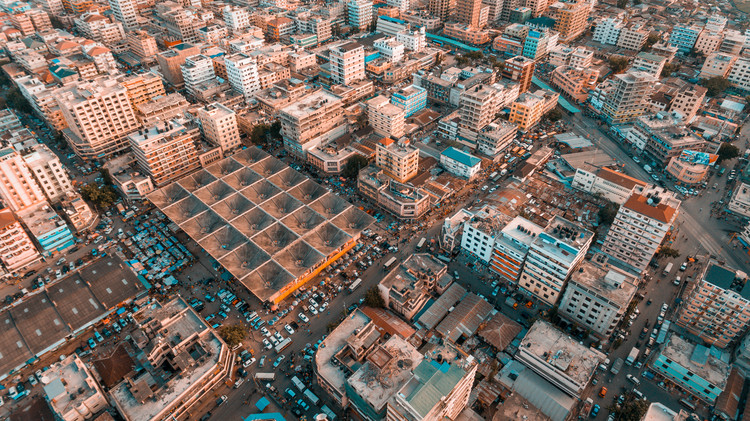 Although we’re in an age of increased e-commerce and online shopping, more informal traders in African cities such as Nairobi, Dar es Salaam and Accra still depend on physical customers to conduct business, with the physical public gathering of buyers and sellers still an essential component of commerce in those cities. As governments across the African continent have sought to construct market halls to make for an easier time between consumer and businessperson, the typology of market halls in sub-Saharan Africa tells interesting stories about the ongoing tussle between tradition and modernity.

This bid to build market hall structures for a contemporary society has seen architects in Africa look for programmatic influences in ‘traditional’ African markets, and stylistic influences in the natural world. Both the Kariakoo Market in Dar es Salaam and atelier masomi’s Dandaji Daily Market in Niger, for instance, look to trees as a precedent for the spatial organisation of the markets.

The current market in the Nigerien village is structured around an old, ancestral tree – which has functioned as an important gathering point for the weekly market. The new Dandaji Market took this impermanent, temporary activity and restructured it into a permanent gathering space, where compressed-earth brick stalls create a more secure gathering space for traders, and colourful, tree-like metal canopies serve the dual function of providing shading, and as a useful visual marker for visitors to the market.

The Dandaji Daily Market, is, however, located in a relatively rural area. The market hall typology in an urban scenario brings its own set of challenges. Amuli’s Kariakoo Market influence is well-known – the “traditional African market under the covering shade of trees” as quoted by the architect. The design was a creative re-imagining of the African-market-under-the-tree spatial scenario, featuring a concrete hyperbolic-shaped roof set on thin columns. Completed in 1974, it was a useful commercial boon to many traders who now would be able to have a formal space to conduct business. Dar es Salaam, however, has changed much since then.

The metropolis that is Tanzania’s primary city has been ever-expanding since the mid-1970s, and the physical footprint of Kariakoo Market had proved insufficient for housing all traders under its roof. What has happened in the forty-plus years since its construction has been a spilling out of market activities into the nearby streets outside the market, with mobile, small-scale vendors setting up shop outside the perimeter walls to attract potential customers from the nearby bus stops. The central Kariakoo Market hall building thus became a backdrop of sorts, with the small businesses that set up shop on its exterior creating a secondary spatial experience outside the main market hall.

In the busy Ghanaian capital that is Accra, the Makola Market in Ussher Town is one of the city’s most significant shopping centres. It is less a market and more an entire street, with well-established arrangements between buyers and sellers meaning that a fourth-floor trader in a building receives the same number of customers as a ground-level trader. A fire destroyed the Makola Market structure in 1993, however immediate plans by the municipal authority to reconstruct it and re-organise the existing spatial arrangement saw steadfast opposition by market vendors.

Re-organisation and reconstruction eventually went ahead – and the new market structure was designed in the style of the buildings around Ussher Town. Although the new structure had modern amenities, such as shops with proper doors, windows and air-conditioning, traders have not warmed to the new structure. The air conditioning, for example, necessitates that doors should remain closed, an action in the local context that typically signifies that a shop is closed. Individual rooms functioning as shops do not have the same ease of circulation as market stalls, and walls between vendors diminish the social cohesion between vendors built up over time. The end result of the development was predictable – most traders returned to the streets of Ussher Town, returning to a mobile method of commerce.

More and more people in sub-Saharan Africa will continue to leave rural areas and make their way into urban settlements, creating ever-growing cities. As architects in sub-Saharan African cities wrestle with how to design market halls that are modern yet embrace tradition, the contemporary market hall typology needs to be less about tower-block megastructures, and instead more about architectural landmarks that still accommodate the natural, informal spillover of commerce into the urban realm.