The night Hurricane Ida inundated New York City, Brooklyn’s Community Board 1 and roughly 100 residents met in a high school auditorium to discuss a potential development that would fundamentally change the Williamsburg waterfront. By the time the meeting concluded at 11:30 p.m., what began as light rain had turned into a torrential downpour and flooding. “It was like a red alarm siren ringing,” said Bonnie Campbell, a principal at Two Trees, the developer behind the project under review.

Weather is an apt source of metaphors for New York’s planning, approval, and entitlements process, especially in the case of River Ring, which proposes a pair of curving Bjarke Ingels–designed high-rises set within a new sponge park for absorbing storm surges. (The landscaping, by James Corner Field Operations, would also include marshes and tidal flats.) The climate of opinion on developments like this one is evolving, and it’s clear that developers need to tailor their proposals to the communities that would be directly affected.

This, in effect, is what Two Trees has attempted to do by focusing the project narrative on affordable housing as well as resiliency. On September 14, the community board approved River Ring by a 20-15 vote (technically a “yes, with conditions” outcome). No rain, this time.

Though favorable to the developer, the outcome nonetheless underscores certain questions: Do the city’s community boards and Uniform Land Use Review Procedure (ULURP) act more like gatekeepers than catalysts for equitable development? And how conditional are these conditions?

Some residents feel the process could function like a needed gatekeeper, but in this case, it seems to be falling short. In the view of local advocacy group Sustainable Williamsburg, River Ring is being railroaded through without enough public awareness, represents a tax abatement giveaway for developers, and overrules community sentiment for a paltry number of affordable units and meager public space. (Sustainable Williamsburg did not respond to multiple requests for comment.)

Broadly, criticisms of River Ring fall into two main camps. There’s what the developer is painting as the NIMBY contingent, which contends that the rezoning necessary for something of this magnitude—two giant towers, double the height of neighboring structures, containing 1,050 units (263 of which are designated as affordable)—will result in crowding the waterfront and opening the area to new residents and traffic, thereby altering the neighborhood fabric. As if to bolster these claims, the community board’s land use committee initially arrived at a “no, with conditions” result before being overruled by the full board. (The twist and turns of the ULURP process caused confusion even among committee members.)

“The NIMBY coalition surprised us a bit because these residents are, from our perspective, new, from the last 10 to 15 years,” Two Tree’s Campbell said. “Surprising to see people who didn’t want their neighborhood to change when they had been the change.”

Then there’s the second camp, local political actors and organizations that evaluate the project through the lens of benefits and trade-offs and how these can be tweaked or added upon to best serve the neighborhood. The horse-trading over building heights and affordability up until now hinged on requests to increase the number of very affordable units while at the same time cutting the total number of apartments by a third to “reduce the anticipated increased load on existing overcapacity on subway transit, vehicular traffic, pedestrian traffic, and wastewater” per public requests—an “unfeasible” demand, according to Campbell.

Two Trees’ argument turns on the matter of density. The recommendations added to the community board’s approval—that half the units be affordable and the height get cut by a third—can’t be met. For the project to pencil out and add to the nearby affordable housing stock, it needs to be a certain size, with a certain number of market-rate units, to subsidize the affordable ones. There’s some wiggle room, but nowhere near what would be needed to meet those recommendations. “Density pays for it,” Campbell said. Two Trees’ current commitment to permanently affordable housing would make a quarter of all units affordable to families making between 40 and 60 percent of the median income of area residents. This was enough to sway Community Board 1 and secure the provisional support of Brooklyn borough president, and presumptive future mayor, Eric Adams, who provided his own conditions and suggestions for more affordable housing in a 26-page report directed to the City Planning Commission. The commission has until early December to review these and other conditions (ultimately, these and the request to slash the height aren’t binding).

Local nonprofits and community groups have also come around. On September 27, before the borough president weighed in, Los Sures, El Puente, and St. Nicks Alliance, or the Coalition, sent Adams’s office a letter in which they demanded that 50 percent of the units be made affordable for residents with 40 percent AMI; in the same letter they observed that conventional inclusionary zoning, set between 80 percent and 120 percent AMI, is “too often filled by rising young professionals who have far more housing options.” Another neighborhood leader, Ramon Peguero of the Nuestros Niños Child Development Center, explained in an op-ed for Brooklyn Paper that “the development of affordable housing has been the only mechanism that has kept long-tenured Williamsburg residents in their neighborhood” and that supporting projects such as River Ring is more realistic than demanding all-affordable development and may offer the “last opportunities for many” to live in the desirable waterfront neighborhood.

In navigating the opposition, Two Trees called upon its lengthy experience in the area. (It owns the former Domino Sugar factory site next door; critics say there’s a sense of déjà vu over the current approval process.) But when it looked like its rezoning bid might founder early in the summer, the developer resorted to what were perceived as threats. If residents voted down the proposal in its latest iteration, Two Trees said, it would cut its losses and sell the site to the highest bidder—in all likelihood, a distribution warehouse, or so the developer maintained. In other words, the neighborhood could take the housing or leave it.

River Ring will continue to move through the ULURP process, including architectural design and permitting with the numerous agencies that oversee waterfront development. Two Trees tentatively hopes to get the official OK by the end of 2021—the end of the current mayor and city council’s term—and break ground in early 2023. But it is distinctly possible that newly elected local council member Lincoln Restler will weigh in if approval takes longer, and so the balancing act between density and housing commitments is certain to continue.

“These things will get negotiated until the very last vote is taken in the ULURP process,” said Campbell. 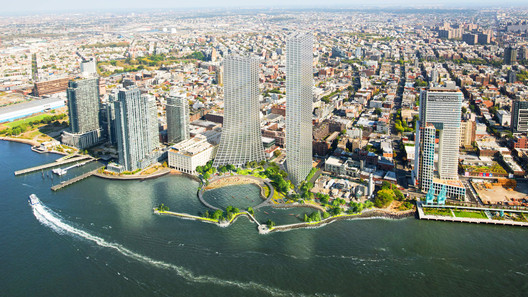