Save
From Festivals to Schools, Cathedrals, and Bomb Sites: The Story of Mid-Century Modernism in Britain
Share
Or
Copy

The typical typologies associated with American, often roadside, mid-century modern architecture sprung up on British shores too: motels, petrol stations, diners—but these were few and far between, mostly due to lower car ownership and different approaches to planning. Harwood, in her introduction to this coffee-table tome, elaborates: “‘Mid-century modern’ might be American, but it usually describes the best design by a generation that was equally confident in architecture, furniture design, and landscape, which included such international talents such as Arne Jacobsen, Alvar Aalto, Eero Saarinen, Charles and Ray Eames and Marcel Breuer.”

These architects influenced those practicing in Britain, and some even built there themselves. Breuer produced one of the U.K.’s most important modernist homes, the Sea Lane House (1936) in West Sussex, before heading off to the States where he fully established himself.

Brutalist Belgrade: Through the Eyes of Alexey Kozhenkov

More so than Breuer, it was the Danes and Swedes who made a bigger impact on modern British architecture of the time. Both countries pushed their architecture and design outputs in British publications. As Harwood notes, the Architectural Review devoted its November 1948 issue to Danish architecture, which it later also published as a book, while many British architects, most famously Ralph Erskine, traveled to Sweden, sampling its design prowess and progressive social programs.

A discussion on Mid-Century modernism in Britain, however, must involve the Festival of Britain, which primarily took place in 1951 along the South Bank, a stretch of land along the south side of the River Thames in central London. The festival commemorated the 100-year anniversary of The Great Exhibition of 1851 (for which the Crystal Palace was built for) and despite a cut in its budget (down to $16.3 million), the festival was a hit, attracting more than eight million.

“The festival was the last great event for television became widely available, so people had to actually visit the South Bank to appreciate it,” writes Harwood.

The eight million visitors were treated to a cornucopia of architectural delights such as the Skylon tower, a space-age conception courtesy of the spritely architects, Hidalgo ‘Jacko’ Moya and Philip Powell, and veteran engineer Felix Samuely. Adjacent was the Dome of Discovery, designed by Ralph Tubbs, at the time the largest dome in the world. Both were hints at the high-tech era to come 30 years later but were each sadly demolished within a year of being built. However, one element on the South Bank remained; architect Leslie Martin’s Royal Festival Hall. This is arguably Britain’s most significant contribution to mid-century modernism, and rightfully, it’s the first building profiled by Harwood in the first chapter, which fittingly focuses on the Festival of Britain (while also showcasing still-built elements erected beyond the South Bank).

Mid-Century Britain uses this as a springboard to introduce other typologies belonging to the period, taking readers on a journey through some exquisite private houses to cities and towns recovering from decimation in WWII. Houses from the lesser-known architect Peter Womersley are featured, with the interior of Farnley Hey in West Yorkshire being the standout—chiefly because it is one of the relatively few interiors showcased. (Harwood, remarkably, took almost all of the photos in the book).

One of the less glamorous to be featured is an example of the ‘Swedish Prefabs,’ prefabricated flat-packed (of course) timber houses imported to Britain until 1948. These have a fascinating history that dates to 1943 when Anglo-Finnish architect Cyril Sjöström and Briton F.R.S. Yorke joined forces with MI6 to import prefabricated houses from Sweden. This failed when the Nazis intercepted them, but later, Arthur Kenyon and Robert Matthew, in partnership with Svenska Trähus, were able to produce and import 5,000 flat-packed houses.

With all the post-war housebuilding taking place, schools also had to be raised for the baby-boomer generation. In Norfolk, Peter and Alison Smithson produced what many regards as Britain’s first brutalist building, the Hunstanton School. But while this was a seminal building worthy of Philip Johnson’s praise in the Architectural Review, its steel frame homage to Mies van der Rohe bankrupted the Norfolk County Council of the material, which was on steel rationing until 1953.

In Hertfordshire, however, a more tried and trusted method of construction was being pursued: prefabrication. A county just north of London, it was where many schools were built, in part due to the evacuees from London settling there. Adept at working under ration conditions, architects A.W. Cleeve Barr, David and Mary (née Crowley) Medd, and others designed a number of schools across the county. The former’s Templewood School is featured, with a photograph that manages to describe the generous amount of daylight afforded to classrooms, the building’s structure, and its circulation.

London, where said evacuees were originating from, saw major reconstruction after the war, with mid-century modernism springing up there as well, as can be seen with the Central Parade in Walthamstow.

“If one building exemplifies mid-century modernism in Britain, this is it,” writes Harwood, eulogizing the shopping center as the symbol of Walthamstow’s resurgence after a V-1 rocket hit the crossroads in the heart of the town. The parade was designed by Walthamstow Forest Borough surveyor, F.G. Southgate, who flaunted the undulating capabilities of the concrete shell construction. The complex is still in good shape today, thanks to spruce up by the London-based Gort Scott Architects.

Harwood highlights many other building types that employed a mid-century modern style—too many to list in detail here—including shops, offices, industrial buildings, and places of entertainment, transport, and worship. The book is lacking archive imagery, which would admittedly paint many buildings in a (welcomed) rose-tinted hue. Sam Scorer’s Markham Moor services station and Mary Medd’s other schools in Hertfordshire are the most notable example of this regarding structures still standing, while photos of lost works, such as Louis Erdi’s Royal Oak Motel in Folkestone, Kent would also complement Harwood’s descriptions of the British architectural scene.

Thankfully, however, this does not detract from her incredible insight on the subject, seasoned with the odd quip, as evidenced by Coventry Cathedral. A masterpiece from renowned post-war architect Basil Spence, who worked with world-famous engineer Ove Arup, the Cathedral is dazzling in every sense. A lightweight, faceted concrete vault beautifully frames artist Graham Sutherland’s Christ in Glory tapestry. “On opening,” Harwood writes, “the cathedral was described condescendingly as an ‘uplifting place to take the girlfriend on a wet Sunday afternoon.’ It is now recognized as one of Britain’s great 1950s repositories of art and culture.” 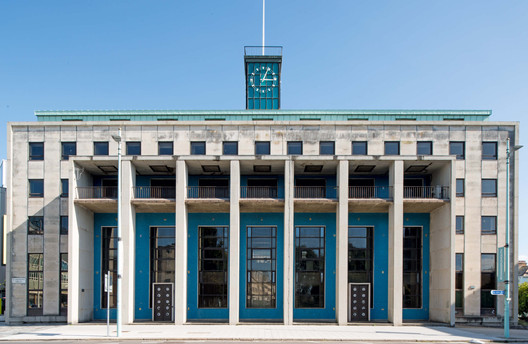