Save
Design Communities for Children: 10 Exemplary Kindergartens in China
Share
Or
Copy

Bruce Jilk in his essay ‘Place Making and Change in learning environments” showcases a radical view of contemporary education which, he argues, is outdated and does not meet the needs of the modern world. Instead of providing for a world of individuals operating within a wider urban environment, schools have become internalized ghettos of childhood, cutting off from communities they are supposed to serve, centrally administered in a “one size fits all” ethos. Designers and architects around the world have always been seeking a more flexible architectural model which will allow much more creativity within the learning process and the environments which serve it.

China, long known for its rigorous education system and selective college admission process, has its unique challenges and opportunities when it comes to designing a healthy learning environment for such large population. This article will take contemporary kindergartens in China, as an example, to investigate what spatial qualities should be considered in order to create ideal spaces for children. Below are 10 innovative architectural practices in China.

The waa architecture firm has created a playscape, as a refurbishment inside an existing industrial complex in the north of Beijing. The designers believe that the missing element of a child’s development in a modern Chinese city is chiefly a functioning neighborhood.

By introducing the experience of street play and prioritizing the reduction of gizmos and screen time, the architects hope to promote learning while allowing children to dream and develop senses relating to equilibrium (balance) and proprioception (awareness).

The architects started the design by reconfiguring the existing spatial structure. They broke the conventional unified spatial hierarchy by deconstructing this 15-class kindergarten into “tribes”, which are named as “Courtyard Communities”. These mini communities are connected and coordinated as one organic group.

Designed by NAN Architects, Tanzishi Kindergarten is in located in the Changjiahui area of Nan'an District, Chongqing. The unique geographical location at the junction of the Yangtze River and Jialing River provides the kindergarten with unique landscape resources. The site is located on the east side of Yuhua Road, high in the north and low in the south, with a maximum elevation difference of 10 meters. The kindergarten has 18 classes and a building area of 5,400 square meters.

The design regards classrooms and supporting facilities as independent elements, arranged in a plane grid order, interlacing indoors and outdoors, forming a spatial form in which the classrooms are arranged around three courtyards.

MAD Architects’s YueCheng Courtyard Kindergarten was designed to reflect the client’s "intergenerational integration" ethos that blends pre-school education and eldercare. The subject site, covering an area of 9,275 square meters, consisted of an original 18th-century Siheyuan courtyard, an adjacent replica courtyard built in the 1990s, and a four-story modern building.

In shaping the project, MAD chose to remove the replica courtyard outside the historic 18th-century original, and replace it with a new space that holds the Siheyuan courtyard “in the palm of its hand.” As it envelops the old courtyard, the new space adopts a low and gentle posture, with a flowing motion contrasting the strict, orderly layout of the historic structure. This tension, emerging from different dimensions in time, gives the building a renewed life. The new does not overshadow the old, while the past does not overtake the present.

Huangling New District Kindergarten is a design practice by BIAD based on the current situation of primary education in Northern Shaanxi. It is a new kind of kindergarten which not only contains the hopes of the masses from this rapidly developing county in the northern part of China, but also reflects the determination of the local government to do concrete things for its people.

In such surrounding environment, Huangling New District Kindergarten intervenes in the site in a free and open attitude, corresponding to the natural and educational contents in the level of space and environment design.

Surrounded by mountains, the site of Xinchang village’s kindergarten is a relatively small platform in the northwest of the village. It faces a mountain gap to the west, so that people can still sense the faraway from here. The surrounding settlements, while providing shelters to the inhabitants, confronts subtly the nature that dominates.The location of Huangling New District Kindergarten is also surrounded by such geographical environment, with a narrow and long piece of land between two mountains, with an inclination angle of 45 ℃ to the north and south direction. Large trees are kept there, which are rare resources of landscape.

The leading architectural consultant of this project, Atelier Deshaus, decided to adopt locally-produced shale sintering bricks for the pavings and the building facades, to endow the place with a strong sense of artificiality. Hence, on the one hand, the design stands apart from the nature; on the other hand, it forms an inseparable ensemble with the sky, the platform, the nearby villages and the further mountain gap.

Courtyard, as core of emotion and communication represented in Chinese culture, helps people to keep cohesion of the family and strengthen the contacts with friends and relatives. Today, courtyard has been a popular layout repeatedly utilized by Chinese architects to connect nature and people in a touchable way.

Scenic Architecture Office’s project, East China Normal University Affiliated Bilingual Kindergarten, is an example that offers conventional kindergarten a courtyard environment for children to perceive nature, to recognize society and to build up themselves with a memory of courtyard life.

Following the leaning western border of the site, the architects organized the units in a setback “W” shape to earn the maximum sunlight from west, south and east, and used Hexagon for the plan shape of the unit. The honeycomb composition fits better the leaning border, it provides more dynamic indoor and outdoor spaces with sense of concentration while diluting the axis monumentality of traditional four-sides courtyard.

Perform Design Studio has completed Sanhuan Kindergarten located in the northern outskirt of Yangzhong, an island city in the Yangtze River.

All the programs are organized around three courtyards that have identical plan shapes but varied floor numbers, resulting in an overlapping and cascading massing form. The architects placed the classrooms on the top floor of each courtyard to maximize their natural light and ventilation, and other supporting programs on the lower floors, such as music, art studios, a library, a multipurpose hall, a kitchen and teachers’ offices.

Located on a slope, facing the Daishan Primary School in the north and city roads in the east, the site of Daishan Kindergarten has a large elevation and a limited area.

To make full use of land, the architecture firm Atelier Zhouling used terraces to set back the upper part of building, offering more outdoor playing fields and sufficient sunshine for each class at the same time. To provide abundant sunlight for Administration and services on the north side of first floor, inner courtyards are placed in the middle. On the aspect of landscape design, every class has a green space for children to play with.

Wujiachang kindergarten project, designed by Atelier Fronti, is located in Lianxijiayuan community on the south side of Lotus Pond West Road in Haidian District, Beijing city. With nine classes, this kindergarten is built as a supporting facility for the surrounding economically affordable housing.

Looking downward upon the main building, it is divided into two functionally different sections by an east-west corridor. The required activity rooms, lounges and restroom spaces for each class form a standard functional unit. The three classes on each floor are accompanied by two staircase spaces, which are lined along the east-west direction on the south side of the central plane corridor, and on the south side of the building, the same functional planes develop up to the third floor. 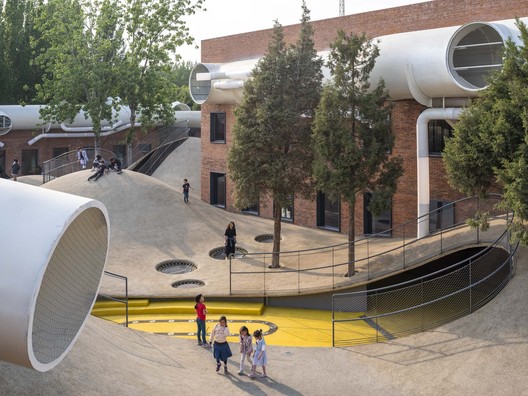