Save
"As Long as There Are Human Beings and their Challenges, There Will Be Architecture": In Conversation with Ole Bouman
Share
Or
Copy 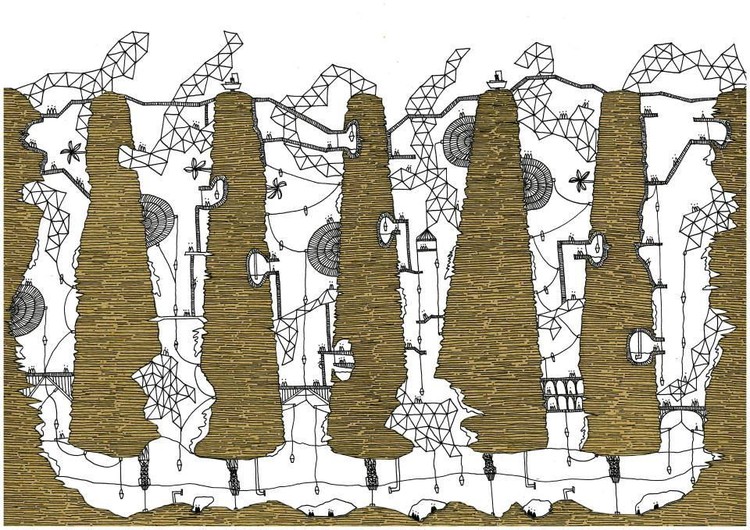 Ole Bouman: They are not portrayed very well, although things are slowly changing. We consent to live in an age of acceleration, which risks not only our moral sanity but also ignores the existential limitations of our planet. Architecture, over the last few decades, has not only been impacted by this process, in many ways it has become the face of it. If not its substance.

But if you analyze its course over history, architecture looks much better. If we summarize some cornerstones in the history of human motivation - tributes to our ancestors, celebrations of glory, manifestations of ingenuity, pursuits of enlightenment, trumpeting emancipation, you can imagine architecture as mankind’s most respectable vehicle. Architecture has given us an honorable response to death, to failure, to aggression, to stupidity, and to greed. We are waiting for new, equally grandiose responses, to reset our current overshoot. They are already there, actually: inclusivity, sustainability, imagination. If architecture has been unable to synchronize with these ambitions from without, it could always do so from within. If necessary, through unsolicited practice. If inevitable, alongside the deliverables needed to pay the bills.

AD: Can you tell us more about how can architecture give meaning and purpose? In other words, where does the power of architecture lie? And do you think architecture can save the world?

OB: The question is not whether architecture can save the world. I learned a long time ago that such an angle only provokes obstinacy. What matters is to understand that when we manage to save the world, either in social or ecological terms, architecture will be one of our most, if not the most important modality.

It’s an essential, albeit not a sufficient prerequisite. We need to be modest before we can be glorious.

AD: Going back to your text, you state that “architecture is obviously too important to leave solely to architects” and that “we can all be designers”. Those are big statements. How did you end up with this understanding? What was the source of it?

OB: As a student, I once organized a lecture by Giancarlo de Carlo who quoted himself from his earlier work, where he expressed a career-long belief that without the participation of the beneficiaries of architecture, without embedding design in the real needs of people and the chances of a local situation, you can only impose a limited professional competence which will never last long. But his statement implies an even bigger challenge today.

To achieve a fundamental shift in the way we organize our space, time, natural resources, and planetary conditions, we simply need all the resources possible, rallying people’s commitment, ingenuity, and modesty. Any great reset will be collective work.

AD: Can you elaborate on this idea and explain why in the 21st century, architecture is not exclusive for architects?

OB: It’s not just the 21st century that I’m talking about. I’m an architectural historian. In retrospect, architecture has always been a crucial factor in history and civilization, rather than just the track record of architects doing their thing, according to the agenda of a specific profession. In the Greek etymology of the word architecture, this semantic confusion is already paramount. For some, it’s the work of the “master builder”. But at its core, it means the creation of value. Architecture is a fundamental human endeavor, as we can observe in any infant’s first attempts to make a place.

Architecture and the Challenges of the World

AD: Let’s talk about the present and about the ongoing coronavirus pandemic. How do you think the current situation would impact the architectural field, in the near future and in the long run? And vice versa, what is in your opinion the role of architecture in solving major issues?

OB: It can’t become any clearer: the pandemic shows how much our spatial behavior needs to be recalibrated. The way we relate in and with space, our “hidden dimension”, to borrow the words by Edward T. Hall, is undergoing a great reshuffle. We protect ourselves with a face mask, maintaining a 1.5-meter distance from one another, by closing public facilities, by working from home, and through curfews. The fact that Covid-19 has spread all over the world, rather than faded out quickly, shows how ill-equipped we are to accept this reshuffle.

Unfortunately, this inability to change our spatial behavior is not just disastrous for Covid-19. It also exacerbates the issues we were already facing: vulnerability and inequity, on a global and local scale. I’m convinced that the pandemic has made us more aware than ever, not only of the risks of social behavior but also its injustices.

Again, we need to start not with the problem but with the solution. The way we dress, move around, engage with others, and synchronize, is not etched in stone. Architecture can help to write the new scripts, and by doing so, reveal mechanisms to help devise more enduring mechanisms of justice and security for all. There is more to design than taped lines describing 1.5 meter, zoom interfaces, or tiny houses in the countryside. These are symptoms of what could be a complete overhaul of how we organize our lives in space, and we need architecture more than ever to guide us.

AD: Sticking to the here and now, our current cities are saturated with social issues. How can architecture help improve the problems of our present-day society and fulfill its needs?

OB: 12 Years ago, in the midst of the Great Recession following the Credit Crisis, we published a book called Architecture of Consequence at the late Netherlands Architecture Institute. In the book, I advocated for an architecture that shifted its focus from nice opportunities to undeniable necessities. It rejected the dominant practice of starchitecture, icons, and desired Bilbao effects, big and small. It also tried to stay away from the indulgence of goodwill and awareness, by returning to the essence of functionalism: an architecture that factually does the job of creating a livable environment, healthy, sustainable, cohesive, and nurturing.

Apologies if this sounds like ‘I told you so’, but perhaps this book came too early. Its messages are still valid: design to intensify, share, re-use, recycle, recombine, synchronize, and socialize our natural resources, our public services, energy, time, space, transport, public domain etcetera. If only architecture would re-organize itself around these directories, it would service present-day society and fulfill its needs.

Architecture and the Digital Revolution

AD: If we had to define architecture before and after the digital revolution, what do you think has changed in terms of ideas, rather than technicalities? What are the direct impacts of this digital awakening on architecture?

OB: Remarkably little, given the impact of the digital revolution. Of course, we have new design tools. Granted, we are in the process of making our built environments smart. But between the work on computers and the facility management by computers, architecture still mainly focuses on “built environment” as the field of architectural operation. Hybridization of these domains is still in its infancy. We still lack a truly architectural conception of living between the apps.

25 years ago I addressed these questions in a book entitled RealSpace in QuickTimes, trying to figure out if architecture could do more than either resist or succumb to the digital. Five years later, I collaborated on a project called Transports 2001 that explored a seamless integration of physical, digital, and temporal domains, proposing a profound innovation of our relationship with space and the other, as a consequence of digital technology.

Read more on the manifesto for this Digital Gothic.

Architecture and the Future

AD: What are your thoughts on AI in Architecture? Where would you draw the limits? And where do you think artificial intelligence will propel the architectural field?

AI will recreate our spaces, but it will also redefine its statute, perhaps even more than the digital per se.

OB: The drive for comfort, convenience, and control makes that we are no longer satisfied with being only connected. The connections themselves need to be scripted according to prevalent expectations. And ironically, these expectations do put us in new bubbles, making it harder than ever to go beyond or act outside of the box. It’s another paradox that architecture can serve this inclination to avoid the hassle and facilitate the ongoing atomization of social life. But again, if we ever feel the urge to really meet the other, we won’t do without architecture again.

AD: You talk about architecture that is not only for architects but for everyone. Do you think we will ever witness the birth of architecture without the implication of humans? Basically, will architecture ever exist without people?

OB: Even Datacenters are enclosed. Even servers find a place on earth. Even robots need shelter. Whether that suffices for architecture will be determined by humans.

First of all, many thanks to Archdaily for these questions. They expand the discourse and agency of architecture, towards a mandate that more properly corresponds with both its historical legacy and its future potential.  They permit reflection on the dramatic mismatch between what architecture actually does, and what it has done before or could do in the future. Should do, as far as I’m concerned.

Last week, the internet celebrated Anne Lacaton and Jean-Philippe Vassal for winning the Pritzker Prize, as a long-awaited major breakthrough in the way architectural excellence is defined. This week, I received a press release from the prestigious Canadian Centre for Architecture announcing a research project called “Catching Up with Life”. Both events are telling, as the highest echelons of architecture have chosen to do the obvious, to listen to society and to act upon its needs. The events also reflect how easily the obvious can become a new attribute of distinction.

One could argue that architecture is badly in need of a comprehensive strategy that would allow it to transcend its chronic underperformance, to permit it to escape the tactics of specific projects, individual careers, and reputations, design software programs, building catalogs, vocabularies, editorial policies, visual scripts and more.

Architecture, as it is organized today, is struggling to shift its focus from individual opportunities to collective urgencies. By persisting in its reactive mindset, it lacks the critical mass to deploy its gravitas to where it may really count. Architecture hardly exists without its assumed prerequisites of client, money, site, and brief, and hence remains dependent on prior expectations and scripts, even if these prove systematically limited, or even plainly wrong. By doing so, architecture denies itself its own craft. 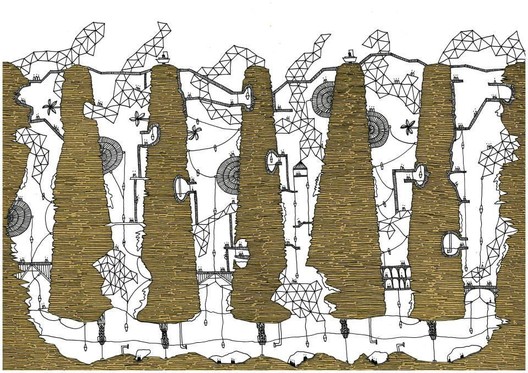