Save
Transforming Factories into Living Spaces: The Changing Face of Spain's Industrial Architecture
Share
Or
Copy 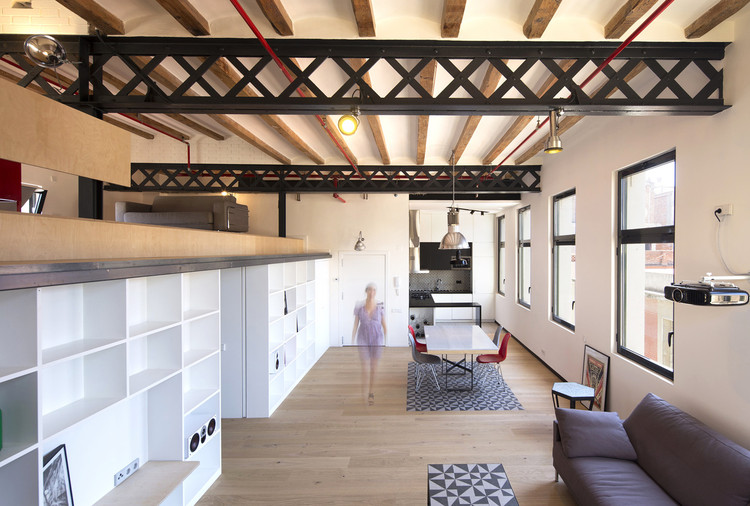 The progressive departure of factories from cities, often due to environmental regulations, noise ordinances, or the price of real estate, has left many urban manufacturing facilities abandoned and out of use. As these urban factories are left empty, many adventurous developers are taking advantage of the plentiful space, light, and flexible functions that they offer, leading to a residential revitalization in many of the world's defunct manufacturing facilities.

This has already happened in many global cities. For example, in New York, the economic crisis of the 70s led to the shutdown of many factories and warehouses in sectors like SoHo.

These abandoned facilities were soon transformed into low-rent residential buildings, often for artists and craftspeople who needed large spaces for their work. One of the most emblematic of these was Andy Warhol, who took up residence in an abandoned NYC hat factory and made it into his studio, which he aptly dubbed The Factory.

To illustrate some of the revitalization strategies used to transform these manufacturing centers into comfortable, stylish living spaces, we've chosen 10 projects in Spain that have taken abandoned manufacturing facilities and turned them into contemporary residential architecture:

“In 1973 Ricardo Bofill found a disused cement factory, an industrial complex from the turn of the century consisting of over 30 silos, subterranean galleries and huge machine rooms, and he decided to transform it into the head office of Taller de Arquitectura (RBTA) as well as his personal residence. This project is evidence of the fact that an imaginative architect may adapt any space to a new function, no matter how different it may be from the original one.”

“The intervention consists in the restoration of a small industrial building and the addition of a new floor to it in order to turn it into a residential building. The old Planell factory was built between 1900 and 1903 by engineer Joan Bolivar. The complex consists of 16 apartments and a parking lot. We have tried to maintain and preserve the existing building while transferring its character to the new addition that completes it. In spite of the presumed duality (industrial building that has to be restored plus new residential building) we have opted for improving the whole by mixing the old and the new in a confident, intense way.”

“This is a full renovation of a building between party walls in the town of Tarrega, currently comprised of a warehouse to be renovated into a house. The building is simple, since it is an old factory where what prevailed was the space. Inside, the building features a large open space, without any interior partitions, about 7m high, reaching almost 9 meters at the ridge of the roof. We propose the complete renovation of the building, fixing the structure and restoring the roof. The intervention does not imply any change in the volume: everything is within the limits defined by the original building."

“When we entered for the first time in the former textile Grober factory, located in the District of Gràcia in Barcelona, completely empty, but so full of history, we felt the total freedom that gave us the space to be able to project any home we could imagine. One of our requirements was to keep the diaphanous and open character, without giving up more domestic space and maintaining a certain intimacy."

“We found this two-floor structure situated between two party walls in the Gràcia neighborhood of Barcelona. The original building was a warehouse built in the 1960s by a family member or the current owners. The restoration maintains much of the building's industrial character and builds on and around the perimeter walls with iron beams to support the interior fixtures. For us, the goal was to transform this cold industrial space into a warm and welcoming residential one.”

“Pilarica is a project for the reactivation of an industrial space in the urban fabric of the city of Madrid. This project is the first of an ongoing series whose goal is to protect the city's industrial heritage through use and occupation formulas which allow to prolong its lifespan, preventing its disappearance."

“The transformation project of the warehouse building of the old industrial complex of Fabra & Coats in Barcelona is included in the process of reconversion of this textile complex of the XIX and XX centuries to incorporate it to the 'BCN creation factories' network.' The project will bring to the Sant Andreu district more than 28,000 m2 of facilities and, as a first time in an industrial heritage transformation, social housing is included.”

“In the urban center of the small town of La Bisbal, on a block from the late nineteenth century that follows two of the main roads to the old town, there is a small warehouse - a former chocolate factory - with a very curious typology, which that makes it a very unique space. The project adapts what was initially an industrial space to a studio and housing space for a family that values the character of the original building. "

“La Nave is the transformation of an industrial space into a place for life, which takes place as a continuous sequence, with very little difference between work and family leisure. It is the result of a creative process that focuses on the use of local materials and construction systems linked to crafts.”

“The project focuses on the reform of two buildings that hosted a small textile industry and a house at the end of the 19th century, in the Rec neighborhood in Igualada, near Barcelona. The neighborhood is currently in the process of transformation from its industrial tradition focused on leather tanning to become a creative neighborhood that also hosts artists, cultural events, and gastronomy."

Check out more restorations and refurbishments as well as articles a part of Archdaily's Monthly Theme "Recycled Materials." 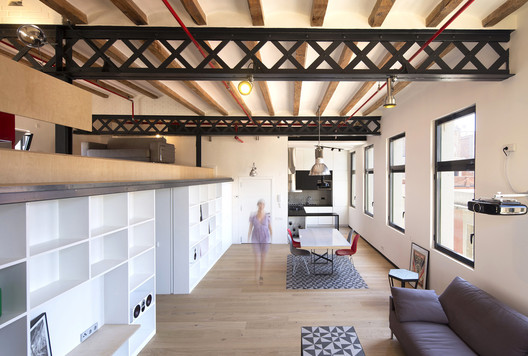