Save
An Integrated Mixed-Use Development in Belfast and a Research Station in Antarctica: 10 Unbuilt Projects Submitted by Established Firms
Share
Or
Copy

Read on to discover 10 selected projects at different stages of development, with their respective descriptions from the architects.

The former freight terminal is being reimagined into a 12-story, 1.3 million-square-foot cutting-edge commercial office space, part of Google’s planned Google Hudson Square campus. Located at 550 Washington Street at the corner of Houston and West Streets in Hudson Square, the building encompasses two entire city blocks in Manhattan - adjacent to Hudson River Park’s Pier 40 and at the intersection of the West Village, SoHo, and Tribeca. The project will enhance the Hudson Square neighborhood’s public infrastructure connectivity through the removal of the West Houston Street overpass and the installation of a new crosswalk over the West Side Highway. It will also add an abundance of new and native landscaping of open space and connect the neighborhood with nearby park and open space.

Detailed planning approval has been granted for Smithfield Yard, a 167,000 sq. ft mixed-use development in Central Belfast for three new exemplars ‘Grade A’ and SME workspace buildings, arranged around The Yard - a new area of the public realm. FCBStudios have developed designs for Bywater Properties and Ashmour Development NI that reimagines a future for the Smithfield area. By creatively integrating an existing listed building into a series of buildings of various scales and cladding materials the grain of the city is re-established where it is currently eroded. Smithfield Yard provides a mix of retail and workspaces that will support local economies and businesses within the historic Smithfield Market area and provide a vibrant activity to the surrounding streets.

Shanghai’s evolution into a globally-influential metropolis is extraordinary, and its identity as a hub of commerce is a symbol of contemporary China. Like many major cities experiencing significant growth, some of Shanghai’s progress has been at the expense of its historic assets, many of which remain only in photographs and memory. Shifting this narrative and building upon nearly two decades of expertise with the adaptive reuse of culturally sensitive sites throughout China, developer Shui On Land engaged Sasaki alongside collaborators Ben Woods Studio Shanghai and Tianhua Architecture & Engineering to lead the design of Panlong Tiandi, transforming it into a vibrant mixed-use district guided by a celebration of its heritage, an inventive approach to public space, and a host of amenities that support a diverse community.

Hugh Broughton Architects, a London-based world leader in polar architecture, is working as part of a team led by multi-disciplinary consultants WSP to masterplan the modernization of the infrastructure at Davis research station for the Australian Antarctic Division (AAD). Stage 1 of the draft masterplan is now complete, and design development is ongoing. The project envisions state-of-the-art research facilities at the station, which was first established in 1957 at the Vestfold Hills, one of the largest coastal ice-free areas in Antarctica. The masterplan addresses the challenges of living and working in Antarctica, such as extreme weather conditions, isolation, logistics, and resource availability.

Kohn Pedersen Fox Associates (KPF) has unveiled the design for the new global headquarters for Baltimore-based investment management firm T. Rowe Price. Comprised of two buildings linked by a lobby atrium, the project includes 470,000 square feet of office space and takes advantage of its location on the waterfront, offering a walkable connection between a landscaped central plaza and the adjacent 4.5-acre Point Park designed by iO Studio Inc. Located in Beatty Development’s Harbor Point, the pedestrian-scaled project connects to the waterfront and a new park.

Located on 32 acres in the Appalachian Mountains of Pennsylvania, the Broad Top house is built upon the existing foundation of American sculptor's studio, Kenneth Campbell. Marc Thorpe Design was asked to design the new home and gallery with a focus on capturing the views of the surrounding landscape while maintaining privacy from the adjacent road. The solution was to divide the house between introverted and extroverted zones through the use of materiality and space. The main façades of the house facing the road would remain austere utilizing reclaimed wood cladding while the more private faces of the home would open up with floor to ceiling glazing to offer views of the surrounding landscape.

The Geek Community Project is a dynamic new intelligent district being developed across an extensive site in Chongqing, China. Within it, the South District has been conceived to house a range of research and development spaces within a smart and collaborative environment formulated around ideas of wellbeing and encounter. The 50,000m2 building is composed of two striking volumes that curve away from each other – without touching – to create four wings that integrate and interact with the surrounding parkland. The southern form is taller, establishing a welcoming gesture to greet arrivals into the building; the northern form is dropped down to optimize views towards nearby historic ruins.

The Delaware River Waterfront Corporation’s RFP and its ambitious Master Plan, reflect a significant moment in the transformation of Philadelphia’s Central Delaware River Waterfront. Pelli Clarke Pelli Architects’ Master Plan provides the winning preliminary design for the Market Street site. The Plan for Market Street enhances the Central Delaware waterfront with an assembly of six cohesively designed buildings on three dynamic retail and amenity podiums which will respect the varying scale of the existing cityscape. In collaboration with the landscape architects Hargreaves Jones, PCPA’s Market Street Master Plan will offer a network of public spaces that merge seamlessly with Penn’s Landing Park.

New spaces, greater comfort for employees, lower energy consumption, and a project based on innovative and sustainable principles: Enel has started renovating its offices on Viale Regina Margherita in Rome with a project that will radically change the building. The Group's headquarters is getting a makeover with a project by the Antonio Citterio Patricia Viel architecture firm. The project will focus on corporate welfare, urban redevelopment, innovation, and sustainability. The renovation, which covers a total surface area of around 80,000 square meters, has been designed to increase personal wellbeing through the provision of modern, comfortable workspaces conceived around the concept of a more agile organization.

Bow Exchange is a mixed-use scheme designed by Architects pH+ for client City & Suburban Homes, located on the Limehouse Cut Canal in London. The proposals for the site include the demolition and replacement of the existing 2 to 3 story industrial warehouse buildings, with a new building ranging from 4 to 9 stories providing high-quality workspace at ground and mezzanine levels and 92 residential units above. The scheme has been carefully developed to respond to the varied character of the existing and emerging urban context, referencing the materiality and robustness of the industrial wharves that line this area of the Limehouse Cut. 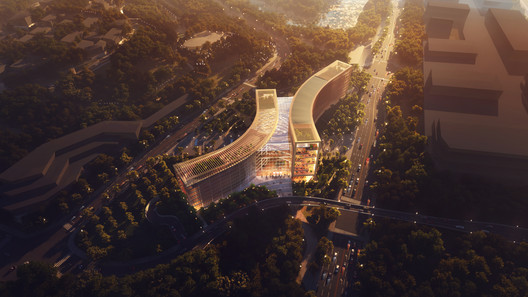