Henning Larsen’s proposal for Seoul Valley was selected as the winner of the Central Seoul Development Competition. Seeking to become a new home for the public in the center of the city, the mixed-use development “merges Seoul’s global commercial profile with an ecological return to downtown pedestrian life”. Other entries included schemes by MVRDV and SOM. 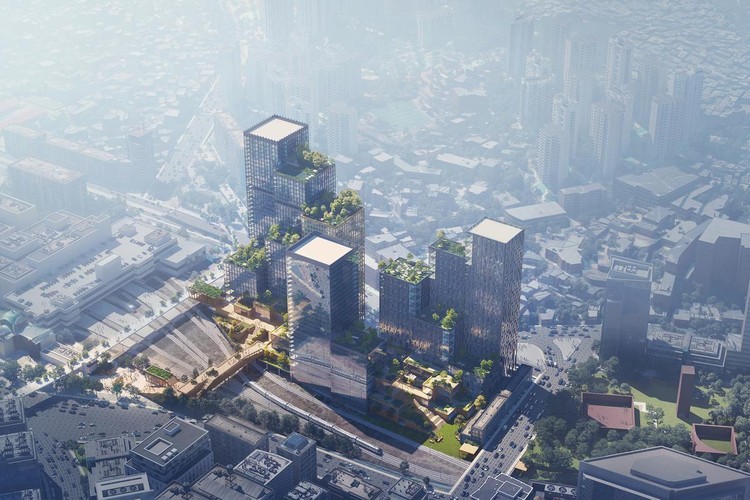 Located on the northern border of Yongsan-Gu, one of Seoul’s central districts, the winning proposal of the 360,644 m² mixed-use urban development, is designed by Henning Larsen in collaboration with local architect Siaplan and retail consultant Benoy. Mixing office, retail, hotel, and residential program within a public podium, the project will enter the Schematic Design phase in the spring of 2021. Aiming to meet the goals of Seoul’s 2030 plan, Seoul Valley creates a comfortable and vibrant space for locals and visitors.

Seoul Valley is such an exciting project for central Seoul. For well over a decade the city has been actively working to revitalize its urban fabric, focusing on the spaces between buildings and the pedestrian links. Seoul Valley fits into that vision, promising to bring public life back to the center not just through shops and amenities but through a design that focuses on public comfort, greenery, and local tradition. -- Jacob Kurek, Henning Larsen partner in charge.

While infrastructural barriers have isolated the central yet empty site from its surroundings, and rapid urbanization erased traditional hanok features, Seoul Valley merges both human and city scale. Fragmenting its elements into numerous smaller masses as they meet the elevated ground floor where they generate gardens, terraces, and courtyards in between the structures, Seoul Valley invites pedestrian flow to access the project from a sprawling tribune stair on the north side and along the Seoul Skygarden Park to the south.

With Seoul Valley, we were interested in developing a scheme that merged the outsized scale of the city today with the small patchwork structures of its past. By dissolving the scale at the public levels, we not only make it feel more livable but nod towards the beautiful structures of old Seoul. Our hope is for Seoul Valley to become a home to not just high-end shops but also craftsmen and artisans. -- Jacob Kurek, Henning Larsen partner in charge.

Office and hotel towers cluster around a leafy core: a Biospheric Layer mitigates pollution, a Percolation Layer blocks noise and forms a lush green interior, and a Conscious Layer stimulates the senses. The massing is the result of extensive wind and climate studies, aimed at reducing heat buildup and prolonging the outdoor season. Retail modules are dispersed throughout the site, creating a free-flowing, ever-changing space that encourages lingering and exploration.

As an industry, we’ve known for a long time the benefits of daylight, exterior views, greenery…but such benefits are often pushed to the side in favor of maximizing frontage in commercial design. Shopping in the future won’t necessarily be about coming out of the shop with a bag, so our goal with Seoul Valley was to have both. In the end, we believe the whole is more than the sum of its parts. -- Jacob Kurek, Henning Larsen partner in charge. 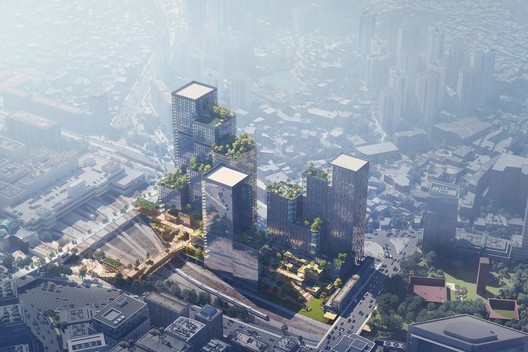