Save
Sheltered Villas in Greece and Floating Terraces in India: 10 Unbuilt Projects Submitted by our Readers
Share
Or
Copy

Houses and Villas are the most researched topics on ArchDaily. Putting together a curated selection of conceptual interventions, this week’s Best Unbuilt Architecture focuses on the residential sector. From all over the world, this group presents proposals submitted by our readers.

This article highlights a floating terraces project from India, a lodge in Ethiopia, a seasonal home for an Iranian family in Germany, and a residential compound in Saudi Arabia. Beach houses in Greece, Croatia, and the U.S. are also featured, showcasing different approaches for the same program. Moreover, more futuristic interventions include the Mountain House on the rocky cliffs of British Columbia, and the blue house, an aquarium-like type of home.

Read on to discover 10 selected projects highlighting conceptual takes on houses from all over the world, with their descriptions from the architects.

Floating Terraces is a villa nested in nature, whereby the form delineates to create a series of outdoor courtyards to create an intimate relationship between the built and landscape. A series of floating cascading terraces extend the indoor living to comfortable outdoor spaces yet protecting the residents from the harsh climatic conditions of the city of Hyderabad. The organization of the villa and movement through spaces are designed to create varying levels of privacy and create differentiated relationships with the landscape.

The project is located over a sequence of rocky terraces, facing a stunning panoramic view. The shape of the main building is inspired by the trajectory that ideally connects the visitor to the mountains. The spa, the villas, and the suites sit on the lower natural terraces, thus remaining hidden from the gaze of those arriving. The architecture is a silent envelope, pure in its form: what stands out is not the building itself but the amazing views.

The idea of ​​the design started from the base that was already on-site, along with 4 old trees. M.E architecture studio built their project around and in between the trees. Dividing the project into three levels according to the client need, one level was designed for the parents, another for the son, connected by a recreational sports space. The project’s canopies can be mechanically opened and closed, just like the windows on the valley side, that opens up to create a terrace.

The villa project is for an Iranian family. To maintain a sense of Iranian architecture for this family, Eshtiyaghi Studio used Iranian architecture patterns in the design of this project, such as arches. Inspired also by traditional houses in Germany, the roof of the structure was slanted, due to heavy rainfall. Using the pattern in 4 sections, showcasing all the main directions of the site except the western side, because of the light, the architect incorporated the same concept in the garden.

The master planning responds to the local climatic, social and sustainability needs to create a contextually appropriate architecture. The contemporary Islamic style architecture responds to the brief by providing introverted planning that is designed around a central landscaped courtyard. The residential units are enclosing a shaded and landscaped courtyard that is optimally shaded and densely planted as an oasis amidst the city. Each of the units has proximately positioned parking, which allows residents to park close to the house for ease.

Blending into a 12,000 sqm site in Karpathos, three villas were designed by A&M to make their appearance in the humblest way. With a 23% site slope, the villas emerge from the landscape in a linear arrangement parallel to the view, respecting the natural topography. A true relationship between indoor and outdoor integrates the building to its surroundings while white retaining walls create the only contrast between the artificial & the natural. Built partially underground with large openings, the villas allow stunning views to the Aegean Sea and horizon.

This project assignment is the reconstruction and upgrading of buildings in Makarska, in the area of Veliko Brdo known as Kuk. The reconstruction is special due to its architectural treatment, it is immersed in an existing stone boulder and the western and eastern façades are in the rock. Only the northern and southern façades are visible. The paint and the material of the northern side merged with a massive rock and the only opening on the façade is the front door.

Graeme Nicholls Architects have unveiled the proposed design for a new development of 160 flats in their home city of Glasgow. The blocks on the site of a former greyhound track reflect the 'bowl' footprint of that former structure in a monochromatic material palette consisting of red bricks and pigmented concrete formed in bays featuring arch-topped windows. The housing follows the model of Glasgow's traditional tenement housing to form a perimeter block over four stories.

The BLUE HOUSE Project is a conceptual design of a summer house located on the rocky Bahamas Cliff. The name of the building pertains not only to the color of the facade alone but also to a pool that is integrated with the body of the building. This 95 square meter-large house comprises a residential story and a terrace that covers the entire roof space. The main project assumption was to create a building whose spacious roof would play the role of a home garden.

The site informed the design of this house project. Set in upstate New York overlooking Lake Ontario, the land is varied in its topography, sloping down to the water’s edge in places, or dropping off a steep bluff of exposed glacial till. The three centered arches are extruded into an ‘attic’ containing the private bedrooms and bathrooms, as well as a workspace that can double as a guest room. This curved attic is lifted off the ground to create a single open living area, with kitchen and dining areas situated towards the lake, and a sitting room set back against a low wall. 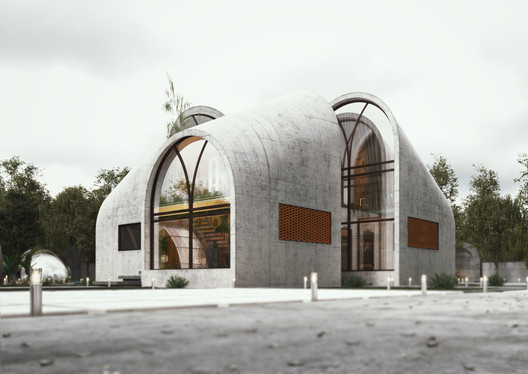