Save
A Space Transportation Hub in Japan and a Humanitarian Response in Egypt: 10 Unbuilt Projects Submitted by our Readers
Share
Or
Copy

This week’s curated selection of Best Unbuilt Architecture encompasses conceptual proposals submitted by our readers. It features diverse functions and tackles different scales, from a spiraling bridge in China to a transportation hub dedicated primarily to space travel in Japan.

Comprising uncommon design approaches, this article introduces a humanitarian architectural response to the needs of the residents in an informal Egyptian settlement. In the master plan category, a Green city proposal highlights how we should develop our cities and neighborhoods in the future, and the first net-zero energy airport in Mexico reinterprets holistic design approaches. Moreover, the roundup presents different cultural interventions, from a museum in Botswana, an installation at the Burning Man festival by AI Studio, and an observatory in Vietnam.

Read on to discover 10 selected projects submitted with their descriptions from the architects.

SPACEPORT CITY is a new type of transportation hub dedicated primarily for space travel, initiated and released by Space Port Japan Association (SPJ), dentsu, canaria and noiz. It connects traditional means of transportation with commercial space shuttle operation, but also encompasses all functions associated with discovering space and learning about it. From space fashion shows to international conferences, the majority of events, research, and business regarding space will be held within its premises.

The Pirouette Bridge is located on the Yanhe Park of Mai-Gao district, Nanjing, China. According to historical records, "Gao" means waterside highland. The hilly terrain of the site and the weaving folds along the river not only naturally present the district's unique landscape textures, but make the absent of communication from both sides as well. Therefore, the design of the bridge is to bring new connectivity for the community of the regional park. Considering the multiple height difference from the river banks, the design approach transforms the complexity of the terrain into a new experience when crossing the river, and integrate the river embankment, pedestrian path, bicycle path and outdoor event space within the traditional form.

Ta’et Nour is a mixed-use urban project on the outskirts of the Assiut governorate in Egypt. The project is designed as a humanitarian response to the needs of the residents of an informal settlement built under high voltage power lines near the village of Al Izayah; who have developed serious health problems resulting from their prolonged exposure to these power lines. As a result, this design proposes to move the residents to an empty land at a safe enough distance from the power lines.

Our project for the National Forest Office’s new headquarters addresses the urban transformation of Maisons-Alfort and contemporary ecological challenges through the use of woodwork. Not only does the wooden structure offer great flexibility in design, but it also allows for the creation of large and welcoming workspaces. Like a tree, a vertical axis holds multiple office floors that radiate around it. The wood material that unifies the whole building is used in many ways that go beyond its prime structural role.

From an accidental residual space, the project emerges. It appears as an underground fissure in the foundations of a corporate area in Mexico City. After Grupo Arca’s Design Center and Warehouse concept success in Guadalajara arises the idea to turn this discovery into a multipurpose space that is nourished by the values of the brand and integrates a cultural component. Not only to offer the best material selection, but also to provoke an impact on the community by integrating a cultural component, allowing to host exhibitions and unique material releases, and to promote cultural linkage through design and architecture conferences.

London based AI Studio has revealed plans for an installation at the popular Burning Man festival - now canceled for this year, due to the Covid-19 crisis. The proposal was to construct a pavilion inspired by Lenin’s Mausoleum – an iconic representation of the Soviet era and the final resting place of revolutionary leader Vladimir Lenin. AI Studio’s pavilion reinterprets a typical, closed, tomb as open and permeable space. Unlike the original Lenin’s Mausoleum, “Mausoleum of Revelations” celebrates enlightened life; each pole is a symbol of a human, or tree, striving towards the sun.

The architect conceptualized a museum and exhibition space that reflect on the old capital's image. By working with the existing remains, it was essential not to override them but rather create a new life around them. The design's intentions were to preserve the historical heritage of the remains by adding a contemporary feel and simultaneously breathing new life into it, therefore highlighting the contrast between old and new. The design considered keeping the remains in their original state, therefore a structural steel framework was introduced to rebuild the old structure of the church by referring to its old photos.

CallisonRTKL (CRTKL), has announced that it will be conceptualizing the first net-zero energy airport in Jalisco, Mexico. Guadalajara Airport’s (GDL) Terminal 2 encompasses a holistic design approach that not only brings together the local folkloric music, dance, food, and symbols of the city but also tells a tale of regionalism through a concept recognized as “The Soul of Guadalajara.” The firm’s inspiration for the terminal design is rooted in the flight of the Mexican Eagle—a longstanding emblem of power and prosperity for the country.

VHA architects has just introduced a new project, like a flower sprouting from a cloud. The tower appears as a giant sculpture, structuring of 27 steel modules with 12m height stylized like a lotus flower (pure beauty of Buddhism) connected together, lifting the coffee space of 600m2 at an altitude of 8m comprising internal well hole. The entire roof area is designed as a garden to grow large confetti and large space for visitors to admire the surrounding landscape.

Green city is a manifest on how we should develop our cities and neighborhoods in the future, based on sustainable and livable approaches, prioritizing urban spaces where we socialize, understanding the specific site conditions, the scale of the buildings, the right mix of programs, wooden building systems, and the variety of services and facilities required in the digital era. The heart of this masterplan is a chain of open green areas that connects all the different street levels and programs, emphasizing the use of pedestrian areas assuring the interaction between all the different programs and users. 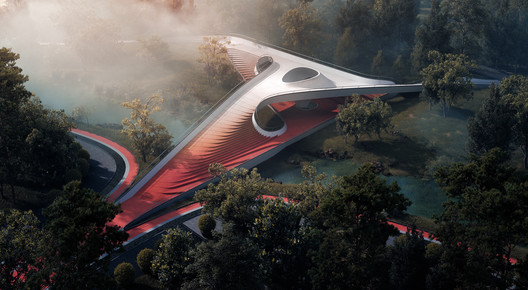