In the 1920s, work was completed on the Cité Frugès housing complex in Pessac, France. The project, meant to house Pessac's industrial workers, would be one of seventeen Le Corbusier works on UNESCO's list of World Heritage Sites.

H. Frugés, an industrial altruist from Bordeaux, told us: "I'm going to allow you to put your theories into practice, as extreme as the consequences may be-- Pessac should be a laboratory. In essence: I want you to take on the challenge of laying out these homes and to standardize the entire process, from the walls to the floors to the roofs, so that they conform to the strictest standards of efficiency. These will guide the entire process, down to the machines that I will allow you to buy."

Putting aside the application of the five essential points presented by the author (open floor plan, pilotis, terrace-garden, continuous windows, free facade) and a layout that offers flexibility in terms of installations, there are other lessons to be learned from the individual houses that interest us: the importance of proximity as well as variation.

On the Importance of Proximity

From the beginning, the placement of the buildings focused on proximity to the sugar factories where the neighborhood residents worked, and many of the workers did not have their own cars, even though the houses were built with places to park them. Ebenezer Howard's ideas about a "garden city" as a way to promote the health and well-being of residents had been around since 1902 and this inspired the search for natural landscaping that would provide a source of food for residents, a priority for urban planners in the wake of World War I. Even today, the groves and gardens can be seen beside the houses.

At the same time, it's no coincidence that the neighborhood is close to the railways that connect to hospitals and parks, ending in the Bordeaux Saint Jean Station, a historic building completed in 1898 that connected the city to the rest of France and even Spain.

On the Importance of Variations

When French architect Philippe Boudon interviewed the residents of Cité Frugès in the 1970s, he also documented all of the alterations that they had made to the neighborhood in the book Lived-in Architecture, Le Corbusier's Pessac Revisited, where he included Le Corbusier's famous line:

It is life that is right and the architect who is wrong.

Many houses in the complex still feature the original color scheme, featuring an array of greens, reds, and blues while others are totally unrecognizable, transformed, or altogether abandoned.

"Some interior spaces were divided to create new rooms, oblong windows were replaced by smaller ones that were square, terraces were covered, new sloping roofs appeared, car parks were removed" were just a handful of the changes made to the homes chronicled by Helena Ariza in her Architectural Visits piece on Cité Frugès and her observations are a reminder of the importance of planning for future maintenance and modifications when designing social housing. 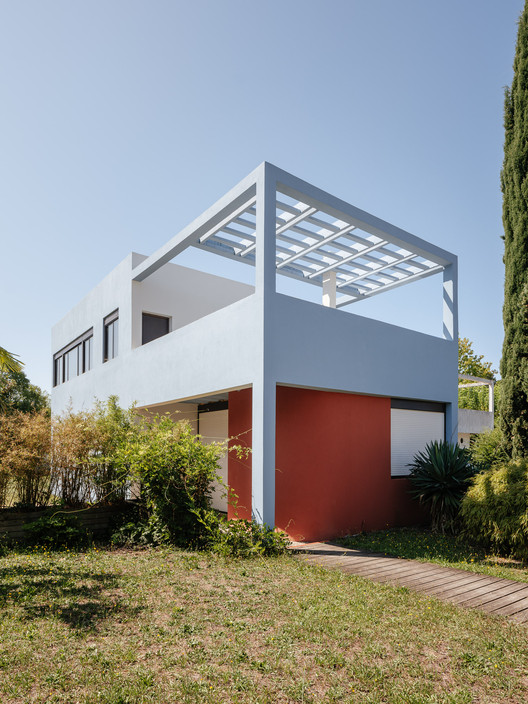