Save
Etheral Luminosity from Above: General Motors Technical Center
Share
Or
Copy 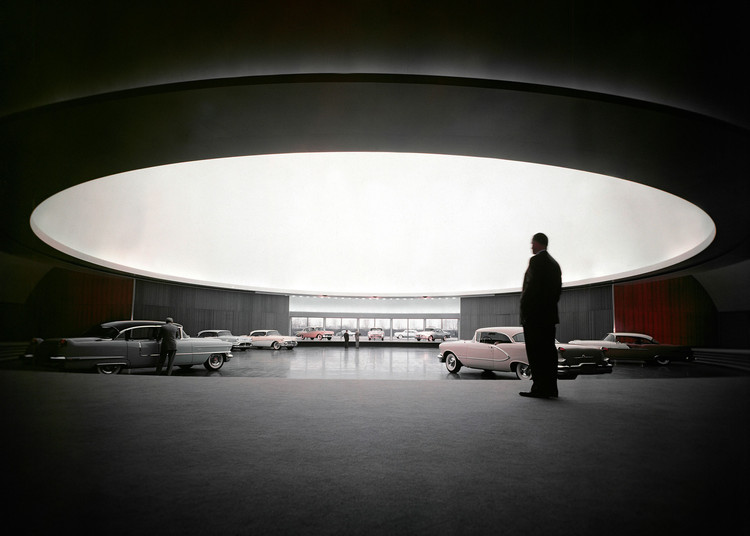 The lavishly illustrated book "Where Today Meets Tomorrow" written by Susan Skarsgard, a GM designer and founder of the GM Design Archive & Special Collection, takes the reader to a unique example of midcentury architecture. Eero Saarinen combined sculptural forms with glossy surfaces for the headquarters complex which opened in Michigan in 1956. The impressive dome and filigree suspended stairs blended with aluminum, glass and glazed bricks grant General Motors a lightness for their mobility mission. Technical details like air condition and illumination were elegantly integrated in order to focus on the rendering of form and material. To which degree the famous lighting designer Richard Kelly was involved is not entirely clear, but certain effects in the GM center would be difficult to imagine without his contribution, argue Seher Erdogan and Sandy Isenstadt in the lighting designer's biography "The structure of light". According to Kelly's "Life Notes", which he wrote in 1974, he was involved in the entire complex of the General Motors Technical Center. Kelly was most proud of the GM dome and the stairs, of which he kept photos of in his notebook, pointed out his daughter Addison Kelly. Bright ceilings - either for work or representation - became a distinctive mark for modernist lightness.

How Apple Strives for the Perfect Sky and Revives Cities

From single clouds to a field of light

Richard Kelly experimented with luminous ceiling elements early on and developed larger and more sophisticated solutions over time. He started with a series of luminous clouds for the windowless Stork Club in New York in 1941. At the New York Rockefeller Guest House, designed by Philip Johnson, Kelly introduced for the first time a grid of recessed luminaires with a louvered grate underneath in 1949. The result was diffuse and glare-free light for visitors. For rendering sculptures like an overcast sky, Kelly created a large luminous ceiling from wall to wall with a white backlit curtain in the New York Knoedler Gallery in 1955. This temporary textile version finds its successor in the technical design at GM for the spacious open-plan offices generating the atmosphere of a calm cloudy sky.

Architecture models at various scales up to full-size mock-ups were part of the test procedures at GM - similar to the intense tests for car developments, notes Skarsgard. Saarinen played with a strict five-foot grid for the design but avoided monotony with slight differences in the design. Variety within unity was Saarinen's mission there. Heating, air-conditioning as well as plastic panels for diffuse lighting were thought of as a sophisticated integrated system. The luminous ceiling for the complete drafting rooms belonged to one of several first solutions in the building industry, which characterize the GM Technical Center, concluded Aline B. Saarinen in the monography about her husband. The technology consisted of linear fluorescent lamps installed behind diffuse panels. Essential was the mechanism to open the panels for changing the lamps after failing due to time.

A luminous ceiling for drawing

With the emergence of large open-plan offices one design challenge originated in the quest for naturalness in order to compensate the far away windows for daylight. One characteristic outdoor feature consists of the bright sky in contrast to the dark ground. While some office projects used linear fluorescent lines with a distinctive high layer of louvres to avoid glare, Saarinen and his team strove for a clean space with a maximum luminous field for the GM drawing studio ceiling. The employees benefited from this diffuse light especially for drawings because it was shadow-free. In addition, it lent the space lightness, height and luminosity like a daylight environment. The lack of contrast linked to luminous ceilings has later raised harsh critique when generally used for office spaces, like Der Scott summarized in the 1970s: "Among all ceiling lighting systems available today, the luminous ceiling is the highlight of visual monotony."

The feeling for an overcast sky feels even more tangible with the dome for the Styling auditorium, because it does not consist of a flat ceiling like the drawing studio. The curved white ceiling made of perforated steel was illuminated from the dome's base to achieve high uniformity. The luminaires were installed invisible for the viewer to accomplish a clean image where the light dominates and not the technology behind. Thereby the GM engineers could completely focus on the evaluation of the highly reflective curves of their cars without any distraction.

A predecessor for a luminous dome can be found in Kelly's lighting design for the William A. Burden Apartment designed by Philip Johnson. The March 1955 issue of "Interior" praised the illumination: "the light is a directionless presence that, shining on white draperies and walls, give the room an ethereal luminosity." Kelly transferred this residential ambiance to an engineering context at GM for combining technology with an exciting atmosphere.

Saarinen and his team succeeded in the mission to combine beauty, a human environment, and appropriate architectural expression. The light from above - either as direct illumination for the large studios or indirect for the dome, led to comfortable, calm and iconic spaces. Precise and elegant detailing generated an appearance where clean surfaces dominated in favor of indicating lighting technology. The GM Technical Center with its luminosity from above belongs to the very notable examples where modernism embraced luminous ceilings to emphasize lightness. Other comparable noteworthy projects include Manufacturers Hanover Trust by Skidmore, Owings & Merrill in New York, the John Deere World Headquarters by Saarinen in Moline, or the Toronto-Dominion Centre by Mies van der Rohe. Saarinen's influence with the simulated overcast sky is still perceptible in contemporary architecture worldwide: The iconic dome was an important reference when Foster + Partners redesigned the Apple Stores with luminous ceilings like for Hangzhou. For Skarsgard, Saarinen's merit of overcoming contemporary technology through collaboration and innovation was the driving force for the modern American corporate campus.